About 300 people donning Cowichan sweaters or other regalia arrived at the Quw’utsun Cultural & Conference Center on a bitterly cold Feb. 10 morning to take part in a walk to bring awareness to the unsolved cases of murdered or missing Indigenous people.

Feb. 10, 2018 marks the second year since 47-year-old Everett Jones went missing from the same location that the walk was taking place. In fact, at least two others disappeared from the same area.

It was with these three relatives in mind that the tireless M. Patsy Jones, a Cowichan Tribes member, set out to organize a walk that would bring attention to these unsolved cases and, ultimately, bring them home.

Jones’ family felt the pain of losing a loved one to violence back in 1977, when Jones was still a small child. Her sister Catherine, about age 28, had gone missing. She was found deceased, dumped in a rural area of Duncan, six months after she was last seen alive. She had been murdered but the crime has never been solved.

Tyeshia Jones was 18 when she went missing while walking home in the area behind Superstore in the early morning hours of Jan. 23, 2011. Her remains were found near a cemetery not far from where she went missing. Her case was solved.

The families of these people were joined by others who are demanding answers and justice for their loved ones. Carol Frank drove from Tofino with her niece to take part in the walk, still looking for answers in the case of her missing niece Lisa Marie Young, who disappeared without a trace from Nanaimo in June 2002.

Members of Pacheedaht First Nation also joined the march to support the family of Everett Jones, whose father is a Pacheedaht member. They also marched for Pacheedaht member Bruce Carlson, who was murdered in Port Renfrew in Dec. 2016. His case remains unsolved.

Holding a portrait of his son Ian Henry, Joseph Joe’s eyes filled with tears as he shared that it would have been his son’s 30th birthday on Feb. 8. “I hope to just see him again. I miss him a lot. I miss his smile, his happiness,” said Joe. He told Ha-Shilth-Sa that Ian was a hard worker and had even gotten him a job at Ucluelet Harbour Seafoods.

With an RCMP escort, approximately 300 people made their way toward the highway on the start of a three- kilometre walk carrying brightly coloured placards bearing images of their loved one.

Meanwhile, at the Si’em Lelum Gymnasium volunteers busied themselves setting up tables and cooking food for their guests. Poster boards were set out on tables in the foyer and people were invited to write their sentiments about the members that were taken too soon.

Albert Bruce volunteered to help out at the event but he stopped to draw some artwork on the poster dedicated to Tyeshia Jones. “I was related to all of them – they were my niece and nephews,” he shared, adding that he was drawing in their memories.

Standing nearby was Rocky Jim. He too was related to all of them. “I walked all the way to Mill Bay (20 kilometers) and all the way back looking for Everett,” he said. But no trace of Everett has ever been found.

M. Patsy Jones organized the event with support from Cowichan Tribes. Both Halalt and Pacheedaht Nations along with local merchants stepped up to support the event with donations.

Dozens of people volunteered to cook and set up and the local detachment of RCMP sent officers to support the event from traffic control to assisting with serving and other tasks.

The people feasted at the gym and listened to speakers talk about how grateful they are for the support given that day. Prayers were offered for all the families. And, even though there were tears, the families found at least some comfort in being together and sharing culture. 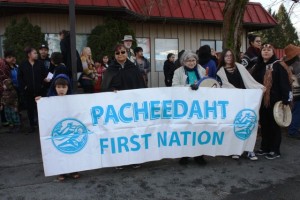 Members of the Pacheedaht First Nation were amnong several Nuu-chah-nulth-aht who took part in the walk. 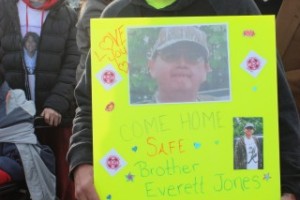 Eric Jones holds a picture of his brother Everett, who went missing from Duncan two years ago. 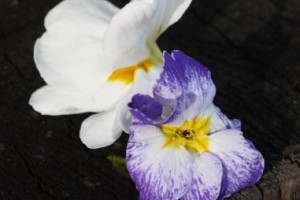 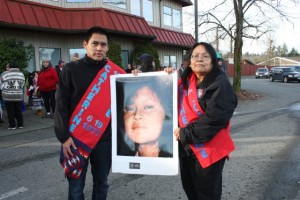 Family of Catherine Theresa Joe, murdered in 1977, are Bradley Joe and Helen Joe. 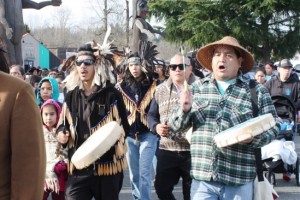 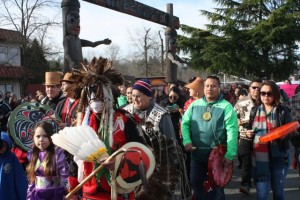 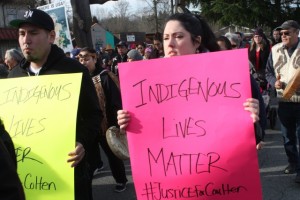 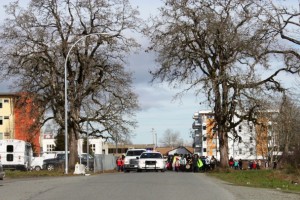 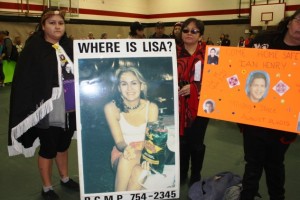 The family of Lisa Marie Young, who disappeared from Nanaimo in 2002, took part in the march. 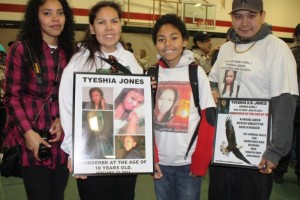 The family of Tyeshia Jones, who was murdered in 2011, holds pictures in her memory..