Nurse Sonia Sommerville engages with a young client during a baby clinic in 2011.

In 1935 B.J. Banfill travelled to Ahousaht to work as a nurse. Thirty years later, her experiences over the year she was in the community were published in the book, With the Indians of the Pacific. As a professional tasked with delivering modern health care, some of the nurse’s reflections illustrate how Canada’s health system has historically struggled to grasp the ancient values of First Nations communities.

“I am informed that for some peculiar reason, unknown reason, many supposed-to-be-dying Indians, especially babies and small children, have been whisked away to other reservations, where there were no doctors or nurses,” wrote Banfill. “There, they have been treated by witch doctors and lived to grow up.”

Generations after Banfill was introduced to the community on Flores Island, nurses continue to serve in Ahousaht and other remote Nuu-chah-nulth settlements along the west coast of Vancouver Island. But in the 21st century the importance of integrating traditional beliefs into health care delivery has become apparent to those working on the front lines of medicine.

Jeannette Watts manages the Nuu-chah-nulth Tribal Council’s nursing department, who make regular trips to several isolated communities along the west coast – including some settlements with only a few homes. A major part of their approach is to respect the potential for healing inherent within patients, rather than dictating all of the solutions.

“People have the answers within, and that’s about their lived experience,” said Watts.

“We encourage them to tell us what they need rather than us telling them,” added Robyn Clarke, an NTC community health nurse who recently received advanced certification to work in remote communities. “We build everything that we do on relationship, without that we have nothing.”

This can be a challenge when reaching out to those who were exposed to the federally-mandated institutionalization of the residential school system or Canada’s Indian hospitals, which operated from 1946-1967. Accounts gathered by the Truth and Reconciliation Commission describe some patients being in these hospitals for years, including children who were strapped to beds around the clock for tuberculosis treatment.

“The federal government basically said, ‘You can’t do it, we’re going to do it for you’,” said Jeannette Tremblay, the NTC’s home care nurse clinical leader, in describing Canada’s approach to First Nations health care in the past. “We’re trying to turn that around by saying, ‘Yes, you know’.”

Tremblay recalls a relationship her team developed with a former patient of the Nanaimo Indian Hospital who lived in Sarita. The nurses regularly travelled to the remote Barkley sound settlement to regulate her health care.

“She wouldn’t even come to town to visit her physician or want to go into hospital,” recalled Tremblay of the special connection. “She lived a lot longer by having the nurses there, visiting her regularly, supporting her in her home with her health care. She was too afraid. We built that trust by honouring her and what her needs were.”

“The need for the elders is to be with their family and people,” emphasized Watts. “That enhances and maintains their whole cultural system, the elder being there.”

Despite the availability of specialized health care in urban centres, the Sarita patient’s reluctance to leave her home is common among aging Nuu-chah-nulth-aht. The healing potential inherent within a nation’s H=ah=uu>i was expressed by Dave Frank, a cultural advisor in Ahousaht.

“We need to do this for ourselves. Nobody can do this for us. We have the knowledge. We have the teachings,” said Frank in the Ahousaht Way Community Health Plan, a proposal assembled for the province’s Joint Standing Committee on Rural Issues.

The health plan stresses the benefits of Ahousaht increasing its capacity within the community to reduce the number of medical trips across the water. Over the year leading up to March 2017, the plan estimates 7,500 medical trips from Ahousaht, bringing a cost of $1.75 million. While many of the boat trips were for consultations or checkups, an estimated 40 per cent were considered emergencies.

“It happens frequently - sometimes there’s two to three trips a day, many trips at night,” said Gail Peekeekoot, a primary care nurse who has been living and working in Ahousaht for the past three months.

Ahousaht is served by a medical doctor for 15 clinical hours a week from Monday to Friday, but there are times that winter storms prevent this access, said Peekeekoot. She noted that while some conditions need to be treated in the nearest hospital in Tofino, many others could be dealt with in the community, saving the expense and trouble of a rushed boat ride across the water.

“People are having to go to Tofino for things like just simple cuts that we could manage here in the community,” she said. “I can’t imagine bumping across the ocean with back pain or a migraine headache, and yet people have been doing that. There’s just some things that we could manage quite well here.”

The community avoids subjecting expectant mothers to such emergency boat trips by relocating them to be close to a hospital well before labour could begin. Deborah Schwarz, a nursing consultant who worked on the Ahousaht Way health plan, said this is commonly done in remote settlements.

“Most of the pregnant women are sent out of the community several weeks before their due date, like so many First Nations communities,” she said.

According to the community health plan, improvements could be made by bringing more nurses to Ahousaht to compliment the two community health and two home care nurses who currently serve the First Nation. In the plan comments from NTC nurses also stress the need for a nurse practitioner.

“Several years ago we lost the life a young man and father of three kids when his brachial artery was severed during the night,” read the testimonial. “Although the response was quick and our first responder team did an amazing job of transporting him to Tofino General Hospital, he passed away as a result of blood loss within half an hour of arrival in the emergency department. An NP in the community would have had the means to ensure that a tourniquet was appropriately applied and that his vital signs were stabilized during transport with adequate oxygen and intravenous fluids.”

While remote communities search for ways to improve health care, finding solutions often reveals more complications. Even if Ahousaht gets more nurses, these health professionals would be challenged to find a place to live in the community, where the average home has seven people living under one roof. Peekeekoot has been fortunate to reside in one of Ahousaht’s designated teacherages, but if a teacher needs the home in September, she’ll have to find somewhere else to stay while working in the community.

“I really do think that they need to have some designated housing for professionals in the community,” she said.

As the NTC nurses work to foster regular relationships with those living on the distant corners of Vancouver Island, the presence of undiagnosed diabetes is another ongoing concern.

“There’s many people walking around with high blood sugars, high blood pressure that don’t know it. Our services need to be increased greatly in that area,” said Watts, who added that the failure of Island Health to connect the NTC’s health professionals to the VIHA patient records system isn’t helping matters. “One of the local physicians is concerned that once we can do a really thorough, massive screening, the statistics could be triple what they are.”

Maintaining a healthy diet can be a challenge for those living in Vancouver Island’s remote communities, according to Enid O’Hara, manager of rural services at the Gold River Health Centre. She sees patients from a number of small west coast communities without a grocery store, including Tahsis, Zeballos and Kyuquot.

“Fresh fruit and vegetables are a bit of a challenge to say the least,” said O’Hara.

But diabetes can also be the result of addictive behaviours that stem from deep-rooted psychological issues, noted Watts.

“What we’re noticing with diabetes is there has to be a mental health component,” she said after a recent trip to perform screenings in Ahousaht, where patients were found with less than half of normal blood sugar levels. “People that we’ve been trying to catch finally came in the other day, walking around with a blood sugar of 38.”

It can be a challenge for a health professional with their own set of standards to adapt to the priorities of a remote First Nations community, noted O’Hara.

Despite this difficulty O’Hara has worked with remote First Nations for the last 35 years, a calling that requires a special breed of person, she said.

“It’s the best and the worst job I’ve ever had; it’s intensely frustrating at times, it’s breathtakingly rewarding at others,” said O’Hara. “It’s not something you can fake, you either love it or you hate it.” 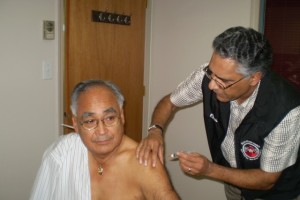 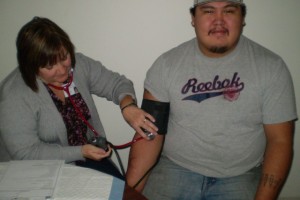