Former students of the Tlucha Children’s Centre and the Opitsaht preschool marked the grand opening of a new centre for young ones on May 3. (Nora Martin photos)

Sixteen former students of Tlucha Children’s Centre and the Opitsaht preschool sang and danced in celebration of the grand opening of a new centre for young ones on May 3.

Grace George acknowledged and thanked the students for taking time during recess to learn the song and dance.

Elder Levi Martin sang a chant and Jared Lucas spread an eagle down on the ground to bless and to protect the area.

Elmer acknowledged Carol Frank, stating that she was instrumental in acquiring the daycare/preschool.

Funding for the centre was obtained through surplus dollars from the Headstart program and B.C.’s Ministry of Children and Family Development.

Carol Frank is fully certified and licensed to practise. Over the years Carol has taken many courses through the Justice Institute of BC. Carol is also required to renew her license every five years and to continually upgrade her skills.

Grace George has worked as a preschool teacher for Tla-o-qui-aht for 31 years. Back in the ‘80s and ‘90s the preschool was set up in Bev Martin’s basement and at Grace George’s house in Esowista due to the lack of facilities.

Tla-o-qui-aht members Loretta Tom and Shawn Frank did the honours of cutting the ribbon to officially open the new Children’s Centre.

In 2001 Tla-o-qui-aht member Joe David won the contest to name the preschool in Esowista. Tlucha is named after late Margaret Joseph (nee Manson), who was knowledgeable in Tla-o-qui-aht history, culture and language. Margaret was credited for helping to preserving TFN language and culture. She was involved with providing information about Tla-o-qui-aht Hah=uu>i during the Meares Island court case, and which serves to protect the knowledge and ownership of the land and resources. Margaret provided support, guidance and advice as a firm believer in furthering one’s education.

During the opening ceremony Bruce Frank presented a wall plaque on behalf of his daughter, Hannah, and son Jared Lucas.

Iris Frank and the education staff presented gifts to Coast Mountain Construction. The region’s MLA Scott Fraser could not attend the grand opening, however he came later in the day and toured the centre.

In closing attendees were invited to tour the building and the staff served a lunch.

Tlucha has three job vacancies, and if interested, please submit your resume to the Tla-o-qui-aht First Nation, who seek a qualified ECE educator, early childhood educator assistant and an assistant. 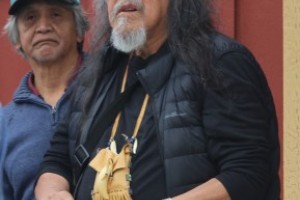 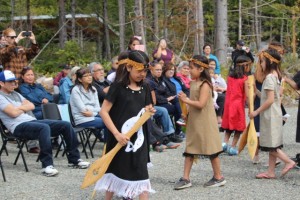