Students from the Maaqtusiis Elementary School sing at a potlatch held in the Thunderbird Gym on May 29. (Eric Plummer photos)

Early on a Tuesday morning in Ahousaht’s Maaqtusiis School Lil Webster was busy fielding questions. Conversation was hard to sustain with the Native Language teacher, as she coordinated the final details for the school’s second annual potlatch that was held that afternoon on May 28. Sitting outside the high school’s kitchen, an unceasing succession of queries came to Webster from students and teachers as they prepared food for the upcoming feast.

Preparations nearly spanned all of this school year, beginning in September with dance practices throughout the week for all grades, from kindergarten to Grade 12. Fish were caught for the event, and clams were also served, as was baked ham, turkey, bannock and a variety of vegetables.

“We had one of the teachers take our students to go get fish. They smoked it and shared it with teachers,” said Webster. “Today is going to be a really fantastic day, because teachers are involved in what needs to be done. I have to write notes in order for them to see what has to be done.”

One of those notes was used for hinatum%as, a formal invitation that student Peter Campbell gave by going door-to-door the preceding evening in Ahousaht. The 14-year-old was joined by Stanley Campbell, Xavier Smith and Mark Frank Perry, as they delivered an Ahousaht phrase that loosely translates to “We are inviting you to the big gym, come eat May 29.”

“We had Stanley Campbell talking in our language,” said Peter. “It was an experience.”

In the spring of 2017 the school began preparing for the first potlatch it has held since 1996, said Wally Thomas, a Maaqtusiis teacher who coordinated singing, dancing and designs used during the cultural celebration. With this second potlatch the school now plans to make it an annual event.

“We decided that it was very important that our kids learned about their roles and responsibilities to host a potlatch,” said Thomas, who teaches song, dance and language to high school students. “They can carry on our culture for our people when it’s their time to take over. It gives us a sense of pride in who we are as Ahousaht.”

As he speaks Thomas looks over a recently completed curtain being hung in the Thunderbird gym next to the school for the upcoming celebration. It incorporates four designs made by Thomas and his mentors Kurt John and George John.

“It’s got a lot of meaning in that curtain,” he said, adding that the school potlach helps to introduce students to the degree of effort required to hold such a cultural event. “We think that it’s important that they see how much work goes into it, how much people are involved.”

While she talks a teenage student who was given the name Hu>nac^i stands by, waiting for his chance to ask Webster a question. The lad received the name last year as he learned traditional dancing.

“We used Hu>nac^i because when he first started dancing, in our eyes he was a really good dancer,” said Webster, adding that more students would be named during the potlatch. “We’re going to give out a couple Indian names to a couple of students.”

Pam Frank, who handles student services at the school, said that the practice of giving out traditional names has seen a resurgence in Ahousaht over the last generation.

“It’s come back probably in the last 15, 20 years where young people are given names at birth or their first birthday,” she said, noting that traditional names are also given during coming of age ceremonies to mark the passage into adulthood, or when people get married.

While a handful of Ahousaht’s families engage in traditional practices from the conception of their children, many kids are not exposed to the old ways, said Frank.

“There’s a huge gap from the time of residential schools survivors to the kids now where culture became dormant for a while,” she said. “Now people are resurfacing it and want to share with the community, Ha’wiih and visitors, that we can come together and still have these ceremonies, songs, dances and share meals together.”

The culture gap that Frank speaks of is a lingering result of a federal policy that dates back to the 19th century. An amendment to the Indian Act banned potlatches in Canada from 1884-1951, as officials saw the ceremonies as anti-Christian. Canada’s Indian Department even laid charges and confiscated goods after the major Kwakwaka’wakw potlatch of Daniel Cranmer in Alert Bay in 1921.

As the Maaqtusiis School works to make the potlatch an annual event, students and organizers strive to share Ahousaht’s cultural traditions with other members of the community and visitors.

“The number of us who still do these practices - not conveniently, but all of the time - are sharing valuable information that’s not ours to keep,” said Frank. “In our teachings we’re supposed to share what we’ve learned with others.”

“I’m happy that people are coming over just to see what our culture is like, to experience it,” said 15-year-old student Hanna George. “I think it’s a good memorable moment for everybody in Ahousaht. You get to see family and get to know other people that haven’t been here before and teach them about our culture.”

Besides helping to prepare food, Hanna worked for months to make headbands, sew shawls and banners for the potlatch. She used sewing skills taught by her late grandparents Eva and Norman Frank.

“I started when I was around five, my grandpa Norman taught me,” she said. “I’ve got a lot of respect for my grandma Eva because she really liked dancing and making shawls. It was her passion, so I really enjoy making shawls and dancing to respect her and keep the tradition going.” 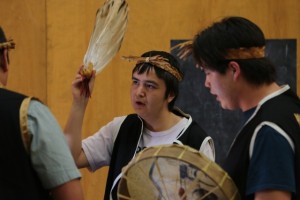 Groups from other Nuu-chah-nulth territories came to Ahousaht for the event, including performers from the Ditidaht First Nation. 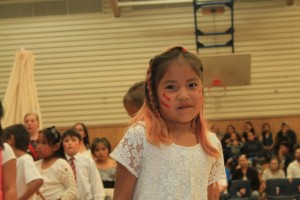 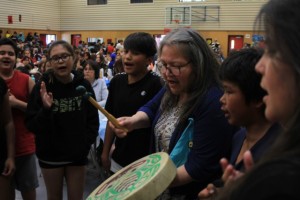 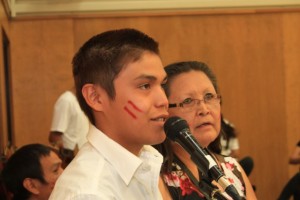 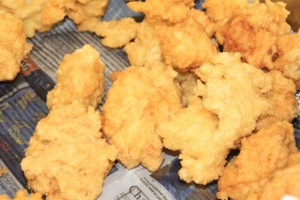 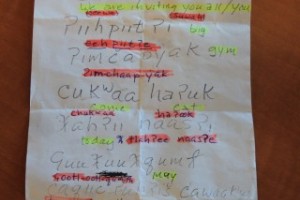 In-person invitations to the event were given in Ahousaht's ancestral language. Pictured are notes for a group that went door-to-door in the community with their message.