Three days of activities were held at Maaqtusiis in June to foster bonding and cultural growth. (Denise Titian photos)

There was joyful excitement in the air as hundreds of Ahousaht members filled Maaqtusiis School Gym on June 21, honouring the invitation of their Ha’wiih (Chiefs) who asked them to come home for three days of family bonding and cultural growth.

“Please leave your differences outside,” said Keith Atleo, as he invited people to mingle with one another and help pass on cultural teachings over the next three days.

The three day gathering, set to start on National Aboriginal Day, was carefully planned with involvement of Ahousaht Ha’wiih.

Ahousaht Councilor Julia Atleo said the idea is to bring the people together in a good way. “There were a lot deaths, especially with young people and we wanted to find a way to create awareness of who we are as a people, we want to create a sense of pride and identity; we want the people to be proud of who they are as Ahousaht,” said Atleo.

The event started with a cleansing ceremony held at Ahousaht’s Thunderbird Hall followed by dinner at the school gym.

More cultural protocol was carried out including ta’ilthma, or giving a token of support to people that are grieving the recent loss of a family member. Keith Atleo explained the reason behind each of these cultural practices as they were being carried out.

When he introduced himself to the crowd, Atleo was careful to include the names of each of his parents and grandparents demonstrating the ties he has to other families both in and outside of Ahousaht.

He told the crowd that the Hahah inuu planning committee worked hard to plan and organize an event that would bring the people together so that they can help one another learn from each another.

“We want you to share what you know about your family,” he said, adding, if you don’t know, don’t be afraid to ask someone.

“We are proud of who we are and where we come from – we are not 659; that’s a government thing,” said Atleo, before telling the people that they are kuu-us (indigenous). And on behalf of the committee, he welcomed the people home.

The committee blanketed each of the Ha’wiih and house leaders, thanking them for being there for the nation. “The committee felt it was important to stand you up and wrap you; to hold you up as muschim (the people),” Atleo told the Ha’wiih.

They also blanketed the newly re-elected chief councillor Greg Louie, thanking him on behalf of the Ha’wiih for working together on behalf of all Ahousaht.

Standing in front of the assembled Ha’wiih, Melinda Swan said to the crowd, “Here they are. The people say they’re not home, well here they are, the chiefs are home!”

When the tables were cleared away the people divided up into their houses, joining their chief in a designated area of the gym. If someone didn’t know where they belonged, someone was there to guide them to their ‘house’.

Once seated in the houses there was a collective feeling of jubilation as some groups cheered loudly and other broke out into song and dance. Group photos were taken of each house.

The evening continued with songs, dances, and Ha’wilth business relating to their houses.

Each night everyone was treated to a dinner that was hosted by a chief and his family. Day one was hosted by Chief Shawn Atleo and family.

Because Ahousaht is a large nation of over 2,000 members, the event was divided up between five different venues for daytime activities that included family tree mapping, crafts and cultural teachings. Some fun and games were played on the beach.

Free boat rides were offered so members living away from could attend. They were grateful for the opportunity to be home, feast on seafood and spend fun time in the village.

Organizers and Ha’wiih are considering making the Hahah inuu event and annual one, possibly moving it to the month of May.

The event was made possible through donations. Julia Atleo said more than 200 people registered and she estimated the cost at about $30,000.

Sponsors included Cermaq Canada as the principal backer. An anonymous philanthropist from Toronto donated $10,000. A Korean missionary group that works in Ahousaht and the Catholic Church Bishop Gary Gordon each made donations. There were plenty of private donations of food and refreshments. 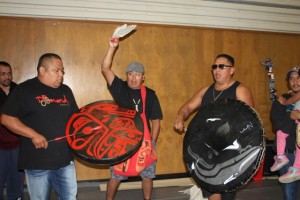 The Hahah innu event attracted Ahousaht members from across Vancouver Island and the West Coast. 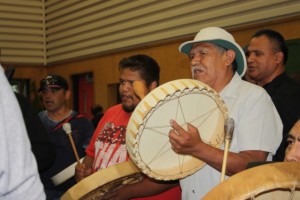 Tyee Ha'wilth Maquinna (Lewis George) drums with others at the gathering. 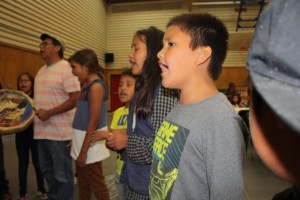 Young boys joined in with the men in the singing of the Ahousaht dinner sound. 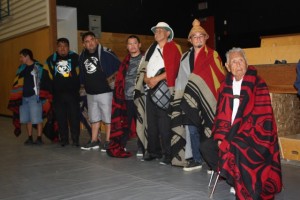 Ahousaht Ha’wilth Ron George stands with others who were blanketed at Hahahinuu Ahousaht Gathering.