Dozens of Nuu-chah-nulth Ha’wiih, delegates and NTC staff arrived in Ahousaht June 12 for two days of deliberations over aboriginal fisheries issues. Years of meetings with DFO to negotiate and plan for Nuu-chah-nulth participation in a rights-based fishery has seen little, if any progress.

Talk about appealing the April 2018 Justification Trial loomed over the June 2018 Council of Ha’wiih meeting.

The first day of meetings was devoted to internal business among the nations before meeting the following day with agents for the federal Department of Fisheries and Oceans.

John (Hudson) Webster, speaker for Tyee Ha’wilth Maquinna, introduced each of the Ahousaht Ha’wiih in the Ahousaht language. He went on to talk about the family connections that some of the Ahousaht have with the Ha’wiih of other Nuu-chah-nulth nations, demonstrating the interconnectedness and unity that the H a’wiih share.

Translating to English, elected Chief Greg Louie thanked everyone for coming to Ahousaht on behalf of Maquinna. “It is important to Ahousaht for everyone to see where we live and how we live; to see where the fish are and how important this (fisheries) case is,” he said, adding that the talks over the coming days are important and will guide them in their steps moving forward with this appeal.

Louie was referring to the Ha’wiih’s plans to appeal the latest court ruling on the justification trial, handed down in April 2018. In the Justification Trial, Canada was expected to explain why Nuu-chah-nulth-aht was not previously afforded the right to harvest and sell fish in their traditional territories.

The B.C. Supreme Court found that the federal government has infringed on the rights of the five Nuu-chah-nulth Nations named in the fisheries rights litigation (Ahousaht, Ehattesaht/Chinekintaht, Hesquiaht, Tla-o-qui-aht, Mowachaht/Muchalaht nations) and essentially ordered Canada to work with Nuu-chah-nulth-aht nations to get them on the water.

While the most recent judgement was initially celebrated as yet another Nuu-chah-nulth fisheries rights court victory, portions of it raised concerns and prompted dialogue about taking it back to court.

In his T’aaq-wiihaak (means harvesting with permission of the chief) update, Cliff Atleo talked about the court decision and implementation of it. “It was 2009 when we won our first court judgement,” he said before outlining the years in court dealing with Canada’s failed appeals and followed by the justification trial.

While some aspects of the justification trial decision were positive for Nuu-chah-nulth, some were not. Some of the negative aspects of the decision that Atleo pointed to were that commercial and sports fisheries have to be involved. In addition, the terms artisanal, small scale, low cost operations were used to describe Nuu-chah-nulth fisheries.

Atleo noted that intervenors, such as the Commercial Diver’s Association, agreed with government that Nuu-chah-nulth fisheries are defined as artisanal – why? “Because we’re Indians and we shouldn’t be allowed to make money,” he charged.

“We have to appeal this decision in order to correct these errors in decision made by the judge,” said Atleo. He suggested that Nuu-chah-nulth could approach other First Nations groups to take part in a court challenge as a strategic move. “It makes financial sense to have supporters come together; it’s critical and important that we engage in this appeal and push the government back,” said Atleo.

Hesquiaht elected Chief Richard Lucas pointed to another flaw in the decision – the judge’s interpretation of our Aboriginal rights. “It’s June now and we still haven’t met with DFO. We need some kind of agreement with them. We need to push them so our fishermen can make a living,” said Chief Lucas.

“How are we going to deal with this situation with the government where literally nothing is happening?" Atleo asked. "They sit here, smile at us, look us in the eye and tell us they’re going to make a new relationship with us then knowingly tell us lies. Their actions speak volumes. They are toying with us.”

Atleo called on the people to get together to talk about this. 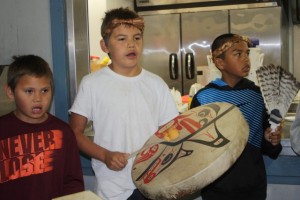 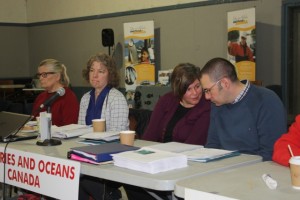 Officials from Fisheries and Oceans Canada travelled to Ahousaht to discuss issues during the meeting.