A limited T’aaq-wiihak commercial allocation for Fraser-bound salmon was a welcome addition to the west coast season, but small compensation for lean years that drove a younger generation from the fishery.

Held in July and August, the Mi%aat (sockeye) fishery involved vessels from five Nuu-chah-nulth nations, taking advantage of a peak in the four-year cycle of the Fraser River stock.

“T’aaq-wiihak commercial fisheries have been pretty minimal since the court case in 2009. They haven’t lived up to expectations,” said Eric Angel, fisheries manager with Nuu-chah-nulth Tribal Council. “This was a big fishery because there were about 30,000 pieces in the [allocation], worth about $1 million to the local economy.”

Healthy numbers of returning sockeye — forecast to be 14 million this year — combined with the migratory path the salmon took this year, prompted the Department of Fisheries and Oceans (DFO) to allocate close to one per cent to T’aaq-wiihak boats. These boats hailed from the communities of Ahousaht, Ehattesaht/Chinekintaht, Hesquiaht, Tla-o-qui-aht and Mowachaht/Muchalaht.

Historically, sockeye migrated down the west and east coasts of the Island en route to the Fraser River. In recent years, though, most have gone through Johnstone Strait rather than down the west coast.

“What we’ve learned is that they haven’t shown up on this side in 20 years,” said Candace Picco, T’aaq-wiihak Fisheries biologist.

Partly due to this, people have fallen out of the fishery. Downsizing of the fleet has been devastating for First Nations communities that once depended on fishing for income and sustenance. It has also led to a generational rift.

“Young men and women aren’t going out fishing with their dads,” Angel said. “This was a very positive fishery from that perspective. The other part is that there hasn’t been a significant fishery on this side for a long time.”

“This was the first time we’ve had a kick at the can in a lot of years,” said Andy Webster, an Ahousaht troller who took advantage of the sockeye openings. “People are under the assumption that we’re getting lots of money but, in reality, we’re just playing catch-up for all the lean years we’ve had.”

He sees plenty of room for improvement.

“They will get through the learning curve. They closed us prematurely and at the end of the day were only giving out small chunks of quota.”

One estimate suggested there were thousands of additional fish left in the water that could have been harvested, he said.

“We had a four-day window and only three or four boats got allocation because they were getting cautious about hitting the number, but I think generally everybody has done quite well.”

Picco noted that DFO miscalculated the T’aaq-wiihak quota by a few thousand at the beginning of the sockeye season. Following more test fishing this estimate was later revised. In the end T’aaq-wiihak fishers caught approximately 900 fewer sockeye that the total allowable catch allocated by Fisheries and Oceans Canada, explained Picco.

Webster said the limited allocations of salmon, herring, halibut and crab as well as gear restrictions — along with the high costs of fuel and vessel maintenance — mean that it’s still difficult to eke out a living from west coast commercial fishing despite having T’aaq-wiihak rights upheld by the courts.

The court ruling recognized the rights of the five nations to catch and sell all species traditionally caught in their territories. A B.C. Supreme Court judge reaffirmed those rights in April. Then, in late June and after steady negotiations, DFO agreed to lift a vessel restriction that limited fishing to smaller “mosquito” boats.

There are 65 mosquito vessels and 36 trollers registered in the T’aaq-wiihak fishery.

“If they honour the court ruling, it certainly would be viable,” Webster said. “At some point we’re going to have to be able to string some long line gear to help sustain the salmon fishery.”

He would also like to see a more formal approach to training young fishers in their school years.

Picco said there was an expectation that allocations would increase significantly after the decisive court victory in 2009, but that didn’t happen.

“Opportunities were confined to small allocations of chinook, gooseneck barnacles and eventually low daily limits of groundfish were allowed,” she said. “This summer’s sockeye allocation reflected a combination of a significant proportion of Fraser sockeye migrating past the west coast of Vancouver Island for the first time during a T’aaq-wiihak fishery, and a willingness on the part of DFO to acknowledge the court decision in their management decisions”

The nations involved would still like to see more of a multi-gear approach, meaning troll boats as well as mosquito boats, Picco added.

“It’s a holistic approach to fishing, which is more environmentally sustainable as well,” she said.

Despite the shortcomings of this first Mi%aat fishery in many years, she feels the overall First Nations commercial fishery is making progress.

“Each year we’re making gains. Nobody would say we’re where we want to be yet,” she said, adding that they see room for additional groundfish openings. 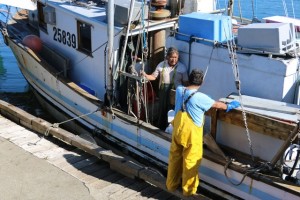 Paul Sam of Ahousaht speaks to a Lions Gate salmon buyer in Tofino while aboard the Maria Christina I, a T’aaq-wiihak troller, in August. 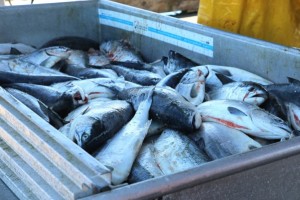 Fraser sockeye salmon are offloaded into the bin at Lions Gate Fisheries Ltd. in Tofino. Lions Gate was purchasing the sockeye on Aug. 8. 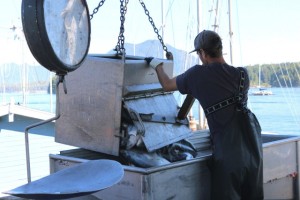 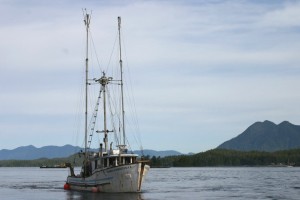 Maria Christina I, a T’aaq-wiihak troller boat, sails the waters off of Tofino. 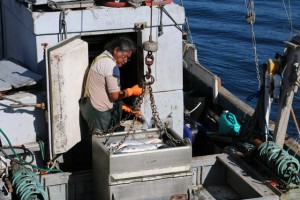 Paul Sam unloads his catch of Sockeye from the Fraser River that migrated northwest to Nuu-chah-nulth territory.