Three award-winning Nuu-chah-nulth athletes have been recognized with a prestigious accolade.

The awards are annually handed out to Indigenous athletes across the province who under the age of 25. The award presentations are a joint effort between the Province of British Columbia and the Indigenous Sport, Physical Activity & Recreation Council (I-SPARC), the governing body of Indigenous athletics in B.C. A total of 47 regional winners were selected this year. They were honoured at six separate award ceremonies.

Thomas, a 14-year-old who was selected for her basketball, soccer and track and field accomplishments, and Fortin, an 11-year-old hockey player, were among the Vancouver Coastal winners and received their awards earlier this month.

Kaloucokovale, 17, a basketball star, was scheduled to be presented with her award during the Vancouver Island winners ceremony on Monday, Nov. 26.

Other regional award ceremonies were for athletes representing the Northeast, Northwest, Interior and Fraser areas.

All three Nuu-chah-nulth regional winners are now automatically nominees for awards at the provincial level. Twelve winners (six females and six males) will be chosen this January.

Provincial winners will then be honoured at the Gathering our Voices: Indigenous Youth Leadership Forum. This event, scheduled for Mar. 19-22, will be staged in Port Alberni.

“I’m just so glad that Indigenous people are people recognized, especially youth,” said Thomas, a Grade 9 student at Vancouver’s York House School. “And I’m glad I’m one of them.”

Thomas had won the same regional award in 2016. But that year she did not also capture the provincial award. Only time will tell if she also garners the award at the provincial level this time around.

"I think I have a good chance," she said, adding she believes her multi-sport achievements might her give an edge over others. "I think the variety I have might give me a better chance.”

Thomas’ accomplishments this year include helping the York House girls’ Grade 8 basketball team win a gold medal at its provincial championships. Thomas was also a member of the Langley-based Venue Kings under-15 squad that captured a gold medal at a tournament in California earlier this month. She’s now hoping to crack the roster of a Venue Kings’ spring travel team.

While she was in Grade 8, Thomas also qualified for the provincial high school track and field championships. She helped her squad to a fifth-place finish in the girls’ 4x100-metre relay race and placed 22nd in her high jump competition.

Though she was also a star soccer player, Thomas is not playing the sport now as she is focusing on her basketball career.

As for Fortin, she had applied for one of the regional Premier’s Awards in each of the previous two years as well. But this was the first time she was chosen as a recipient.

“This was a huge accomplishment for Isabelle,” said her mother Denise Johnson. “Third time is really a charm.”

Fortin, who has been playing hockey since the age of seven, is currently a member of the Vancouver Angels’ Peewee C1 squad. During the 2017-18 season, Fortin, who is a right winger, helped her team to a pair of tournament championships. Her club won the gold medal at the North Shore Winter Classic last December and also took top honors at the Richmond Ravens’ tournament this past March.

Fortin plans to continue playing hockey for quite some time. She’s hoping she eventually goes on to represent her province and country as well.

“I want to be on Team B.C. and Team Canada,” said Fortin, who is a Grade 6 student at Vancouver’s Sir Guy Carleton Elementary School.

As for Kaloucokovale, she was a member of the Hesquiaht Storm girls’ squad that won a silver medal at the prestigious Junior All Native Basketball Tournament staged in Vancouver this past March. She also plans to suit up for the Storm at the 2019 tournament, which will be held in Kitamaat Village. Because of their top finish at this year’s tournament, Kaloucokovale and her Storm teammates receive an automatic entry into next year’s tourney.

Kaloucokovale expects her side to fare well once again.

“I think we have a good chance,” she said. “We only lost one player.”

Eleven of the 12 players that were on the Storm roster this season are eligible to return for the 2019 tournament.

Kaloucokovale also played four years of high school ball. Though she was eligible to compete in the junior ranks for a couple of years, she played all four of her high school seasons with the senior team. She graduated from Maaqtusiis High School this past June. She will begin classes at the Nanaimo campus of Vancouver Island University this January. 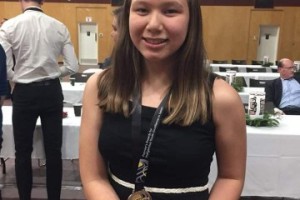 Isabelle Fortin of the Ditidaht First Nation earned an award for her strength in hockey. (Denise Johnson photo) 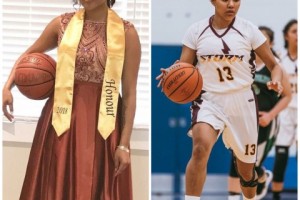