Six years after his passing, the family of Ray Seitcher I carried out one of his final promises – to bring good food, fun and laughter to the people in Victoria.

Ray Seitcher was an elder, a Tla-o-qui-aht hereditary chief, and he worked with the Nuu-chah-nulth Tribal Council in its Teechuktl/Quu’asa Program to help people on their healing journeys.

He was in Victoria in April 2012 at a healing event when he suddenly fell ill and checked into a hospital. His unexpected passing caught friends and co-workers off guard. A year later his family gathered to honour his memory in Tofino/Ty-Histanis, where he had been living.

“Ray promised the people he would come down to Victoria to feed the people,” said Linda Seitcher.

Late Ray wanted to feed the Tla-o-qui-aht living in the city and his son, Hiyouweah (Ray Seitcher II), is honoring his wish.

Hiyouweah took it a step further by inviting all Nuu-chah-nulth to come together at Edelweiss House.

“It’s a way to bring good food and our culture – drumming, singing, dancing –­ to people living away from home. A way to connect,” said Linda.

The extended Seitcher family brought enough turkey, ham and seafood to feed a crowd of 300. The nieces, nephews and grandchildren all pitched in on the preparation, set-up and serving of  food and refreshments to guests while the elder aunts greeted everyone at the door.

Acting as emcee, Chris Seitcher announced on behalf of his father, Hiyouweah, that they would like to make the Feeding the People event by the Seitcher family an annual one.

“Grampa worked with lots of you,” he said.

The event is about sharing a meal, culture and laughter.

“This is what is really important, is coming together; we can be strong when we are together. Healing, strength is what it’s all about,” said Chris.

The Seitchers want to give the Nuu-chah-nulth people living in Victoria a sense community.

“You are not alone,” said Chris to the crowd.

He reminded the people that the evening was all about fun, togetherness with no politics. The crowd responded in appreciation, with applause.

Following dinner the extended Seitcher family got together on the stage and posed for a family photo. They went on to lead fun, games, singing and dancing for the remainder of the evening. 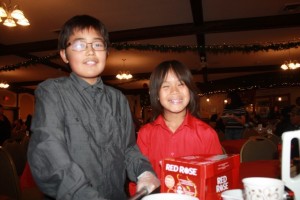 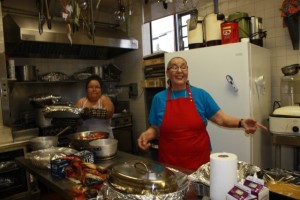