Dozens gathered in Tofino on Wednesday in opposition to the Coastal GasLink pipeline, which is being constructed through Wet'suwet'en territory in northern B.C. (Nora Martin photos)

Conflict in the northern B.C. nation’s territory has attracted national attention this month, when hereditary chiefs of all five Wet’suwet’en clans stood in opposition to the construction of the Coastal GasLink pipeline. Designed to transport natural gas from Dawson Creek to an LNG terminal near Kitimat on the B.C. coast, Coastal GasLink’s parent company has made agreements with elected chiefs and council’s from First Nations along the route. But this does not include the Wet’suwet’en hereditary chiefs, who led a blockade to the pipeline construction.

Following a court-ordered injunction to give Coastal GasLink access to the site, RCMP moved in on Jan. 7, arresting 14 people.

According to a press release provided by the Jan. 16 event’s organizer Terry Dorward, under Anuc'nicw it en (Wet'suwet'en law), all five clans of the Wet'suwet'en have unanimously opposed all pipeline proposals. On Jan. 7, militarized RCMP descended unto unceded territories of the Wet'suwet'en Nation's Gildumt'en and Unist'ot'en clans to enforce a colonial court injunction. Peaceful women and elders were faced with heavy assault rifles and the full colonial violence of a state invasion on unceded territories. Fourteen were arrested, including Gildumt'en spokesperson Molly Wickham.

The Tla-o-qui-aht First Nation stands in solidarity with the Wet'suwet'en Hereditary Chiefs and their sovereign right to defend their people and the environment from the proposed Coastal Gaslink Pipeline.

People gathered by the totem pole at Tin Wis Resort in preparation for the March. Tla-o-qui-aht elder Levi Martin began with a prayer.

People came from Salt Spring Island, Nanaimo and Denman Island to support the cause.

To begin the procession people selected banners and placards which read "RCMP Hands Off Wet'suwet'en”, “Water is Life” and “No Pipelines”.

During the five-kilometre walk from Tin Wis to Tofino the supporters took turns singing and shouting slogans like “No Access-No Consent”.

The marchers took to walking the Pacific Rim Highway, slowing down traffic for a few minutes. In all there were two negative reactions by non-participants driving by.

The marchers stopped by the new RCMP building that is currently under construction to make it known they do not agree with the national police force carrying out instruction from governments, and then proceeded to walk through the town of Tofino, ending at the Anchor Park. The organizers felt it would be important to end at the park as the Tofino council accepted a totem pole honoring the Ha’wiih and in the spirit of working together in reconciliation.

Terry Dorward read out a statement and on a personal note said, "Reconciliation will not be achieved by a barrel of a gun".

“Yeah we may have been illiterate when the settlers first arrived here in our land, but so were they as they did not understand our language either," he said.

Jeh Custerra of Friends of Clayoquot Sound (FOCS) stated his reaction to the injunction, stressing that the police were ruthless arrest women and elders in Wet’suwet’en territory. He also said that B.C. and federal government know they have no jurisdiction and nothing can go through without Indigenous consent.

In his address Dan Lewis of Clayoquot Action said he was horrified at the RCMP’s use of guns and said this is not reconciliation, noting that liquid natural gas actually means fracked gas.

Deanna Dean, who is from Alberta but now lives in Esowista, spoke of her concerns, stressing that fracking has to stop and tying the practice to causing earthquakes.

MP Gord Johns sent his regrets and provided a written statement that read "he stands in solidarity with Wet'suwet'en”.

Tla-o-qui-aht Chief Councillor Moses Martin said when the Hereditary Chiefs make a decision it should be honored. Moses also stated "the business community needs to wake up as we smell danger," adding that what is happening to the Wet'suwet'en violates the first law of respect.
In closing the participants were invited to the Village Green Park to help distribute pamphlets.

Cecilia Jackson, Tla-o-qui-aht member, expressed her curiosity and concern about what is happening in Wet'suwet'en and was happy that she could come out and help with making placards and take part in the march. She does not approve of the tactics that are being used by the government and the RCMP to build a pipeline through First Nations territories. 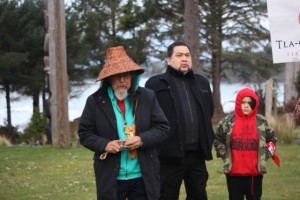 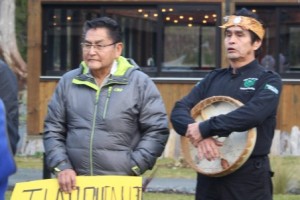 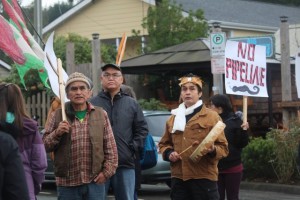