Named after the Uchucklesaht hereditary chief, the M. Charles M.B. was christened May 20, 2015, with a ceremony for the vessel at the Centennial Pier at Port Alberni’s Harbour Quay. Uchucklesaht Ha’wilth Clifford Charles is pictured speaking. (Denise Titian photo)

The Port Alberni Maritime Heritage Society are hosting an event this Thursday, featuring the story of late Uchucklesaht Ha’wilth Martin Charles’ heroism in saving lives during a 1970’s accident at sea.

The event is part of PAMHS’s seasonal events that include exhibits and guest speakers for those interested in local maritime topics.

Hosted by the Port Alberni Port Authority (PAPA), Rescue at Sea: Remembering Martin Charles, M.B. will be a look back at a 1976 maritime accident off the coast of Bamfield involving a fish packer vessel.

Clifford Charles, Uchucklesaht Ha’wilth and retired Coast Guard officer, will be presenting the story of Martin Charles and will share details of the dramatic events off Bamfield in February 1976. Clifford knows first-hand what happened because he was there with his father and two other Canada Coast Guard personnel assisting in the rescue.

Clifford was young when he landed a job with the CCG (Canadian Coast Guard) literally by accident.

“My dad, Martin Charles, had been working at the Coast Guard station in Bamfield for several years when a co-worker broke his leg,” said Clifford. He was hired immediately to fill in for the injured worker.

One day in 1976, father and son along with two other CCG personnel were dispatched to a herring packer vessel that had grounded in rough seas.

“The vessel grounded at Cape Beal Lighthouse; throwing four persons into the ocean,” he recalled. But they were not the only casualties. A helicopter team from the US Coast Guard also responded to the mayday but they crashed into the ocean.

Charles and his CCG team rescued six people in the incident. Sadly, one life was lost.

Both the Unites States and Canadian Coast Guard presented Martin Charles and his fellow crew members with silver medals of bravery. In addition, the CCG named one of their new rescue vessels after Martin Charles.

Clifford Charles, Officer-in-Charge (retired), Canadian Coast Guard, will be at Echo Centre in Port Alberni on Thursday, Feb. 21 at 7 p.m. to present Rescue at Sea: Remembering Martin Charles, M.B. The Maritime Heritage event will be held in the Dogwood Room. Admission by donation.

The Port Alberni Maritime Heritage Society (PAMHS) was formed in 1989 with the purpose of working with the museum and the community to preserve and present the maritime heritage of the West Coast area. 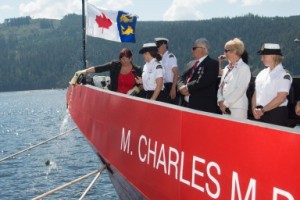