Sea lice are seen on a juvenile chum salmon sampled in Clayquot Sound. The threshold for lice on farmed salmon is under review as DFO blames ocean conditions and climate change for an epidemic in the region last year and in early 2019. (Cedar Coast Field Station photos)

Representatives of the fish farming industry say they’ve got sea lice under control at Clayoquot Sound salmon farms after the parasites spiked at three operations in 2018 and researchers found a similar increase among wild juvenile fish.

Despite water conditions earlier this season that hinted of a possible repeat of the problem, Cermaq has been consistently reporting sea lice levels below the regulatory threshold of three motiles per fish.

She takes issue with some of the numbers published recently on social media and said Cermaq’s latest juvenile salmon counts will tell a different story when released in coming weeks.

“There is nothing near the prevalence and abundance cited in media,” Sams said.

After the oubreak, fish at three Cermaq sites were harvested early and one operation was closed in order to reduce the risk to out-migrating wild salmon.

Citing its use of technology and innovation, the salmon farming sector maintains science is on its side in keeping sea lice infestations in check. Open net pens don’t adversely affect wild salmon, they argue. Scientists outside of the industry take issue with those claims.

Mack Bartlett, research co-ordinator with Cedar Coast Field Station, an independent not-for-profit society based on Vargas Island, said they found a fairly high abundance of sea lice among juvenile salmon this season, though not as high as last year.

“We were seeing averages of four, eight and 12 lice per fish per week at one of our three main field sites,” he said. “We had a prevalence of infected fish between 98 to 100 percent over these three weeks at that same site, Ritchie Bay.”

The juveniles had to swim past three farms that were over their sea lice threshold during the sensitive outmigration period.

“There were five active Cermaq farms in that southern Clayoquot area as well during the sensitive period,” Bartlett said.

Like Uu-a-thluk biologists Jared Dick and Roger Dunlop, Bartlett doesn’t doubt there is a direct link between the rise of sea lice counts at fish farms and among wild fish.

“Previous research shows we’ll see a correlation,” Bartlett said. “There’s a pretty good understanding of that relationship. That’s why three (per fish) is the limit. Some this year failed to meet that standard.”

DFO said it has reached out to Cedar Coast Field Station but has not independently verified the society’s sea lice counts among wild juvenile salmon.

Earlier this summer, a group from Tla-o-qui-aht First Nation — deeply concerned about open-net pen farming in general — participated in a Sea Shepherd Society boarding of several fish farms operated by Creative Salmon. They captured video of lice on fish and juvenile wild salmon suspected of carrying PRV, piscine orthoreovirus. Still, the industry insists its practices do not put wild fish at risk.

“Science tells us that salmon farming is not having a negative impact on wild salmon populations,” said Shawn Hall, spokesman for the B.C. Salmon Farming Association.

“Research and development in all aspects of the business have been a critical driver for salmon farming for the last 30 years,” Hall said. “The industry is working to keep sea lice levels on farms in all areas low and to address when issues do come up in an area.”

Last year’s outbreak occurred in the general area of Clayoquot Sound and was not confined to fish farms, he noted.

Cermaq’s Hydrolicer, a $13-million well boat that uses pressurized ocean water to de-lice farmed salmon, is being readied for service. Sams said the vessel continues to undergo trials in Dixon Bay and hasn’t been needed this season due to lower counts.

“It will be ready to roll when we need it,” she promised.

DFO inspectors return to Clayoquot Sound fish farms in September to do additional sea lice audits after testing in June found all operations below the regulatory threshold.

Responding to questions from Ha-Shilth-Sa, a DFO spokeswoman said ocean conditions triggered last year’s outbreak. For the past few years in Clayoquot Sound, the typical drop in salinity that comes with winter and spring rains has not occurred.

“This higher salinity has resulted in increased lice production in the region and exacerbated the lice levels on farms,” DFO stated in an emailed response. “The warmer waters and favourable conditions for sea lice may be caused by climate change.”

The threshold for sea lice was set in 2010 after DFO assumed responsibility from the provincial government over salmon farming. More stringent than in other jurisdictions, it was considered precautionary at the time.

“Since then, ocean conditions and treatment efficacy have changed and DFO is reviewing the sea lice threshold,” the department stated. “This requires careful consideration because setting thresholds too low can lead to unnecessary treatments, which can decrease effectiveness or generate resistance.”

Biological resistance to SLICE, a chemical for controlling sea lice, was confirmed last year by the B.C. Centre for Aquatic Health Sciences. Cermaq says SLICE has reduced effectiveness, but that the pesticide did help mitigate lice during the outbreak.

“We have made the commitment to move away from therapeutant-based treatments to mechanical removal,” the company stated. “Our first line of defence will be the use of our Hydrolicer, but we will still use SLICE where it makes sense.”

Dick, Uu-a-thluk central region biologist, points to research that could shed additional light on the question of sea lice transmission. Mass die-offs of herring with sea lice in Hot Springs Cove coincided with the fish farm infestations. He believes that should warrant intensive genetic sampling to determine whether there’s a link.

While industry contends the herring died because of a virus that made them more susceptible to sea lice, Dick suggests an alternative hypothesis: Immune systems in healthy herring suppress the virus and it became fatal when lice attacked the fish, causing stress and weakening their immune systems.

“I find it hard to believe that it’s just a coincidence that the Hesquiaht Nation is observing these herring die-offs of fish covered in lice for the first time ever when there’s also a massive sea lice outbreak on local Atlantic salmon farms,” Dick wrote in an email to Ha-Shilth-Sa. “The lice and larvae from these lice are free to enter the currents surrounding the farms and spread throughout the sound, and could play a role in the die-off.”

Of the paramount concern over lice transmission from fish farms to wild salmon, Dick remains convinced and said he doesn’t need more evidence.

“The impacts of fish farms on their surrounding environment are definitely detrimental to wild salmon populations,” he noted.

Sams said Cermaq remains open-minded and cites its compliance with the sea lice threshold for 16 years prior to 2018.

“I don’t agree with some of the science being put out as black and white,” she said. However, avoiding risks for wild salmon “has to be our No. 1 priority,” she stressed.

Promising transparency and collaboration, the company remains committed to participating in a risk assessment in the area of its Clayoquot Sound operations, she said.

“We’re going to compare results,” Sams said of Area 24 roundtables held with other stakeholders, including Ahousaht’s fisheries department. “Why is there such a gap in understanding? We sit at the table with an open mind.” 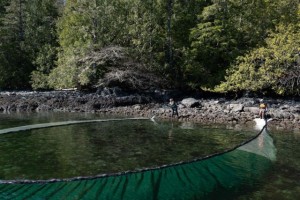