A specially equipped helicopter is currently surveying Vancouver Island’s north for signs of mineral deposits. Geoscience BC is holding an open house on the project Sept. 11 in Campbell River. (Harmen Keyser/Precision GeoSurveys photo)

Those living in the territories of northern Nuu-chah-nulth nations might notice a low-flying helicopter with a peculiar T-shaped device this month. Part of a wide-ranging survey being conducted through August and September to detect mineral deposits, the helicopter is collecting data for those with an interest in mining exploration across northern Vancouver Island.

The survey covers 6,127 square kilometres - an area comprising one fifth of Vancouver Island - stretching from Port McNeill to Tahsis and Port Alice to just west of Sayward. The helicopter flies along lines that are 250 metres apart at a constant elevation of 80 metres, gathering magnetic data from the ground below through the use of three magnetometers attached to the aircraft. This data will help geologists to determine the structure of rocks below the ground.

“Each [magnetometer] is looking at the magnetic response of the earth below,” said Ricard Truman, director of external relations for Geoscience BC, the non-profit organisation behind the survey. “From that you can get an indication of where mineral deposits might be. The analogy that often gets used is the needle in the haystack. What this is doing is telling you where the haystack is.”

Geoscience BC helps facilitate natural resource development, and will be releasing a map detailing magnetic responses in the area in January. This information will be publicly available and presented at a conference for the Association for Mineral Exploration British Columbia.

The survey covers the traditional territory of the Ka:'yu:'k't'h'/Che:k'tles7et'h', Ehattesaht and Mowachaht/Muchalaht First Nations, all of whom have been in contact with Geoscience BC.

Mowachaht/Muchalaht Administrator Kevin Kowalchuk said the First Nation is gathering information on what the survey will mean to the community, and has a conference call with Truman scheduled in September.

“On the surface, there could be some benefit to MMFN to understand the nature of the minerals in the territory,” said Kowalchuk in an email to Ha-Shilth-Sa. “Any exploration efforts would have to come to MMFN through our referral process and we will definitely have something to say about this.”

An open house is being held for the public in Campbell River Sept. 11 to answer questions about where the survey could lead.

“If a nation wants us to come and talk to them - if they want us to come and meet with their lands manager, chief and council or whatever it happens to be - we’re more than happy to do that,” emphasized Truman. “What I would hope is that by making the data public, it can help everybody who’s involved in that process – not just the mineral exploration guys.”

The current survey follows a similar exploration project that took place over 2012-13, covering territory directly west. A number of Indigenous groups participated in information sessions for that survey, including the ‘Namgis, We Wai Kai, Kwakiutl, Nanwakolas and K’omoks First Nations.

In the early 20th century coal and copper mines helped to establish towns and railways across Vancouver Island, but in recent years mining has fallen from economic prominence, with the island’s last coal mine closing near Campbell River in early 2016.

This could change if developments in the north prove to be lucrative. The Myra Falls copper, zinc and lead mine is preparing to restart operations that were suspended in 2015, and NorthIsle Copper and Gold is developing a project south of Port Hardy with claims covering 33,447 hectares. The open pit mine would operate for 22 years, producing an estimated 1.4 billion pounds of copper, 2.8 million ounces of gold and 55 million pounds of molybdenum, which is used to produce steel alloy.

“As we all continue to use phones, our laptops, our electric cars and whatever else may be coming, the global demand for these metals is forecast to grow significantly,” said Truman, noting that an electric car motor uses a large volume of copper in its coils. “An electric car uses four times more copper than a regular car.”

Geoscience BC’s open house on the Northern Vancouver Island Minerals Project is being held on Wednesday, Sept. 11, 5-6:30 p.m. at the Campbell River Community Centre, located at 401 11th Ave. The event is open to anyone and free to attend. 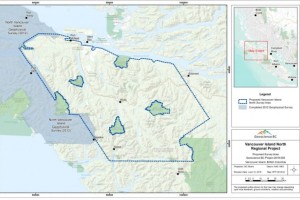 The survey covers 6,127 square kilometres - an area comprising one fifth of Vancouver Island. (Geoscience BC map)