Their staff is trained in providing culturally appropriate approaches to spiritual well-being, and so it was their staff that opened the event with a prayer, followed by traditional welcoming words from both Tseshaht and Hupacasath First Nations.

Sayers pointed out that there are many invisible disabilities, ones that you can’t see – hearing, mental capacity, emotional disorders for example.

In addition, people with disabilities are less likely to pursue higher education, have difficulty finding employment and many live in poverty. Sayers asked the people to identify issues that they still have and discuss solutions over the course of the next two days.

“We know we need more money; we need to identify the challenges and what is needed, and we can celebrate the successes,” she said.

Tseshaht elder and long-time chair of DAC, Helen Dick, took a moment to pay tribute to two members of the DAC who are no longer with us. Yuułuʔiłʔatḥ elder Gord Taylor and Ka:'yu:'k't'h'/Che:k'tles7et'h' elder Pat Nicolaye both served on DAC for many years and both passed away. Their work with DAC was acknowledged and respects were paid to their families.

Dick stressed the importance of taking care of oneself.

“If there’s something that doesn’t feel quite right in your body, go to your doctor and get checked out,” she said, adding that people don’t get brownie points for suffering.

“Men will take care of their tools, their cars, their outboard motor better than they take care of themselves,” he pointed out, before reminding people to stay on top of their health concerns.

Dick spoke of homelessness and how it affects families. Dick said she met a family member who is homeless and said she can’t understand how they got that way.

“It is important to acknowledge them and to love them,” she advised.

The power of prayer

The keynote address focused on the concept of hishukistsawalk and was delivered by Quu’asa employee Joe Tom. The word, hishukistsawalk, he said, means everything is one; we are one with Mother Earth. Hishukistsawalk – your spirit, your food, your medicine is all one. If you don’t take care of one the others suffer, he explained.

Tom described the Nuu-chah-nulth practice of burying the placenta after the birth of a baby. The placenta, which is part of the mother and baby, is returned to the earth, maintaining that connection and keeping everything one.

Tom went on to talk about the power of prayer.

“The Creator gives us the tools to do things, but some of us don’t recognize the blessing for what it is. Instead, they complain that their prayers are never answered,” he said. “We keep asking and He keeps answering but we need to do the work.”

On the issue of homelessness, Tom said that something needs to be done about children who are on the streets. He urged people to be proactive, to do something to help out and be part of the solution.

Stan Matthew of Quu’asa spoke about the NTC’s harm reduction work. The outreach workers, he said, connect with people in the streets and at the safe injection site in Port Alberni. Once a connection is made, Quu’asa staff provide services and support to clients in the form of transportation to appointments, referrals to other agencies – whatever they can do to help people help themselves.

“She will do referrals to treatment centers, whatever support they need, even if it’s just sitting with them and talking over a cup of coffee,” said Matthews.

Some of the elders shared their thoughts on current issues they are facing during open mic sessions. One elder who suffers from Parkinson’s disease pointed out that five Nuu-chah-nulth-aht people have died from the illness in the past year or so.

According to Parkinson’s Canada, Parkinson’s is a neurodegenerative disease. Movement is normally controlled by dopamine, a chemical that carries signals between the nerves in the brain. When cells that normally produce dopamine die, the symptoms of Parkinson’s appear. There is no cure for Parkinson’s disease.

The DAC Ability Fair will continue at the Alberni Athletic Hall with presentations by resource people, including diabetes management and information on Canada’s Old Age Security and Pension Plans. There are free self-care services including massage, haircuts, reflexology, manicures and acupuncture. Participants may also spend some quiet time learning to weave cedar or sewing native applique designs. There are several information and resource tables set up and a resource person to assist people applying for the new Secured Certificate of Indian Status.

Dinner is scheduled today (Oct.2) at 5 p.m., followed by a performance by David James & the Big River Band – Tribute to Johnny Cash. 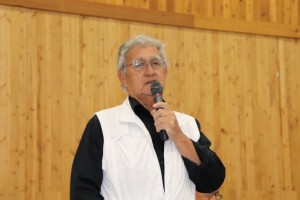 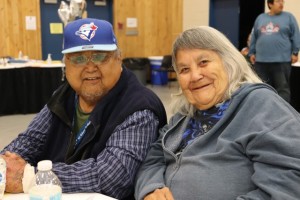 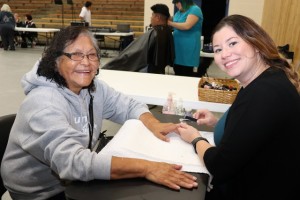 Marie Samuel gets her first manicure from Angelina Zarantonello. 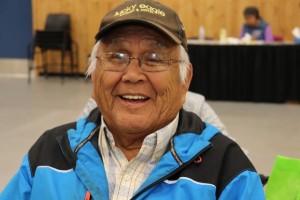 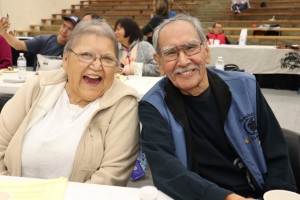 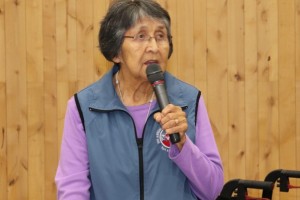