The Sarita Log Sort purchased in 2017 is part of the Huu-ay-aht’s plan to tap into economic opportunity with forestry in its territory. (Huu-ay-aht First Nations photo)

Trevor Cootes didn’t seem to mind travelling more than halfway across the country to tout one of his First Nation’s latest achievements.

Cootes, who is in his second term as serving as an executive councilor for the Huu-ay-aht First Nations, is spending a portion of his week attending the Cando Conference in Gatineau, Que.

Cando, an organization which promotes economic development in Indigenous communities across the country, stages an annual conference, rotating to various parts of Canada. This year marks the 26th annual Cando Conference.

Cootes led a workshop at the conference on Tuesday, Oct. 29 called Saving the Forestry Sector with Economic Partnerships.

“It means a lot to be able to share our stories,” said Cootes, who not only is responsible for overseeing Huu-ay-aht’s economic development but also holds the First Nations’ external affairs as well as its training and employment portfolios. “We’re always looking to bridge the gaps in Indigenous communities. And we want to share our experiences. We want to hopefully be a model.”

Cootes said discussions with officials from Western Forest Products began three years ago. He added prior to this deal there was historically destructive forest activity which did not benefit Huu-ay-aht’s interests.

Ideally the agreement with Western Forest Products will provide long-term sustainability for Huu-ay-aht’s forest resource. Since the deal was finalized, Cootes added things have been going rather smoothly.

“We’re on track,” he said. “It’s meeting our expectations. And the benefits we see right now is that our forest company is doing well.”

Huu-ay-aht officials were also hoping the deal would create numerous jobs for its members. That includes not only those currently living in the First Nation’s territory but those members who are in locations including Port Alberni, Nanaimo, Victoria and Vancouver.

“We are getting interest (from our members) from all these locations,” Cootes said.

To help entice some of those members living away from the First Nation with possible future job opportunities, Cootes said the Huu-ay-aht First Nations hooked up with North Island College to expand its forestry program. Twelve Huu-ay-aht members, including three of Cootes’ nieces, are now enrolled in the college program and working towards their Coastal Forest Worker Certificate. The program began in September and will last six months.

The program will be evaluated upon its conclusion. Provided reviews are positive, the course is expected to be offered again next September.

Cootes added Huu-ay-aht officials are hoping the forestry agreement will create a considerable amount of jobs for its residents within one to two years.

“I don’t think I’ve seen that in B.C. before,” he said of a deal between a First Nation and a forestry company, which joined forces to create a new enterprise, called Huumiis Ventures Limited Partnership.

The new enterprise enables the First Nation to have a voice on board-making decisions, said Cootes.

“Rather than being on opposite sides of the table this allows us to be there with them,” he said.

The agreement with Western Forest Products will allow Huu-ay-aht to generate some funds, which in turn can be used to build homes and infrastructure on the First Nation.

Cootes added the deal also bodes well for Huu-ay-aht’s future, in part because it is willing to engage in partnerships.

“It strengthens relationships with all levels of government,” he said.

Cootes added his First Nation is keen to work with others in other sectors. 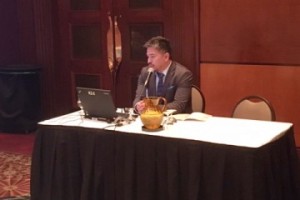