The list of approved projects for the B.C. Salmon Restoration and Innovation Fund did not include any initiatives focussing on the west coast of Vancouver Island, but Nuu-chah-nulth submissions are still being considered, say DFO officials.

In early July Fisheries and Oceans Canada announced the first round of accepted projects for the fund, which is worth nearly $143 million in federal and provincial support. But the 23 successful applications excluded the 350 kilometres of Nuu-chah-nulth territory along Vancouver Island’s west coast.

The Huu-ay-aht’s plan to rebuild the Sarita River after decades of logging degradation was among the denied applications. At the Nuu-chah-nulth Tribal Council’s AGM in late September the First Nation put forth a motion to “advocate for more funding to address restoration on the west coast of Vancouver Island” and explore a multi-nation funding proposal. The motion passed with a call to “ensure that proper consideration is given to Nuu-chah-nulth First Nations and projects that impact our territories”.

Uu-a-thluk, the NTC’s fisheries department, sent five applications to the fund, four of which were deferred to the next submission period, while one was outright denied. Uu-a-thluk’s applications include rebuilding recreational and commercial fishing opportunities, a partnership to manage herring fisheries, tools for salmon management and research, assessing chinook from hatcheries on the west coast of Vancouver Island, as well as a conservation project involving the recovery of genetic samples of chinook from Nootka and Kyuquot sounds.

The DFO accepted invitations to present more information about the salmon restoration fund - and its criteria for selecting applications - to Nuu-chah-nulth leaders this fall. Staff from the federal department attend the AGM in Victoria and the Council of Ha’wiih Forum on Fisheries in Port Alberni Oct. 8.

“Could we see a situation where none of these funds come to the west coast of Vancouver Island?” asked Uu-ah-thluk Manager Eric Angel at the fisheries forum.

Christie Whelan, who manages partnerships and outreach for the fund, said that approximately $70 million is still available in the program for future submissions. More approvals are expected this winter.

“The west coast of the island is a gap that has been identified,” said Whelan. “It is something that we’re considering as we’re looking at this.”

In the spring 192 applications were received for the fund, 70 per cent of which is financed by the DFO, with the remainder covered by the province. Successful submissions included a mobile app launched by the Sport Fishing Institute to provide online information and catch monitoring, as well as another project by the SFI to maximise the social and economic potential of the sports fishing industry.

Infrastructure upgrades and habitat restoration work by Tides Canada and the Watershed Watch Society on the Lower Fraser River were also approved, and an evaluation of the natural boundary of Cowichan Lake by the valley’s regional district and the Cowichan Tribes are benefitting from the funding.

Applications were judged according to a scoring system, which Shane Petersen, a senior DFO project officer for partnerships and outreach, explained at the AGM in late September.

“Can the proponent get the job done? Do they have a good record of accomplishing projects? Do they have the partners they need?” he said. “Is the proposed budget adequate?”

Petersen noted that another 15 projects are currently being considered.

“The Nuu-chah-nulth expressions are still very much in the mix. They have not been rejected,” he said. “They will be reviewed by our experts.”

Two years ago the Huu-ay-aht began work on restoring the Sarita River, which holds a central importance in the First Nation’s culture and historical sustenance. But work slowed down this year when funding tied to a partnership with Steelhead LNG was affected when plans for an export facility came to a halt.

During the AGM Huu-ay-aht Chief Councillor Robert Dennis Sr. pointed to difficulties in engaging with Fisheries and Oceans Canada.

“We just can’t connect with the upper echelon of DFO,” he said. “DFO is the hardest to crack. It has been one of the most difficult jurisdictions to deal with so that we can get on the same playing field in trying to enhance salmon streams.”

“We’ve indicated to Canada that we’re willing to participate where we can increase the amount of chinook that is done through the Nitinaht hatchery,” added Dennis. “That hasn’t been met with favourable response, even though we said we’re willing to pay whatever the cost is to do that. We’re targeting to get up to one and a half million from the Sarita to the Nitinaht hatchery. We need support from the DFO to make that happen.”

“We are the knowledge holders of our traditional territories - and our Ha’wiih are the holders of those – did you have any participation from them?” asked Ditidaht Chief Councillor Brian Tate during the fisheries forum.

Two of the accepted projects will directly apply to fish farms, with support for research into how aquaculture is affecting wild stocks and a First Nations monitoring program for net pens in the Broughton Archipelago.

“Restoration to me - from my point of view - something has to be done about those fish farms before they do anything. It’s going to be senseless,” commented commercial fisherman Constant Charleson during the AGM.

The Hesquiaht fisherman also drew attention to an overpopulation of pinnipeds on the Pacific coast.

“You don’t want to be the first one to set when you’re a commercial herring fisherman anymore, because all those seals are going to see you setting and they’re going to all come over to you,” he said. “There’s 500-600 of them in the nets. That’s got to be addressed when they say restoration.”

“We are discussing what our best approach would be for the second round,” assured Whelan. “The scoring system that I presented, that’s how we’re starting the conversation.” 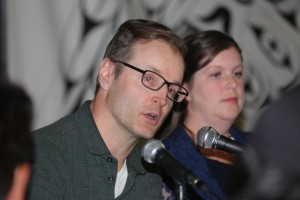 Shane Petersen with Fisheries and Oceans Canada said that Nuu-chah-nulth applications are “still very much in the mix” for the Salmon Restoration and Innovation Fund. (Eric Plummer photo)