The tournament, hosted at Alberni District Secondary School and the Alberni Athletic Hall, saw high school basketball teams come from around Vancouver Island and the mainland to compete. Hundreds of locals and visitors packed the gyms to cheer on their teams—crowds were especially loud during ADSS feature games.

Armada won their home opener game on Thursday night against Kwalikum with a final score of 64-29. Broekhuizen said every player got a chance to play and even got on the score sheet during the first game.

“Our strength definitely was our defence. I thought we played really well and put pressure on the ball. We did a great job of full court pressure without fouling,” Broekhuizen said.

Armada’a Jennika Mercer was named player of the game against Kwalikum for what Broekhuizen said is her impressive athletic ability.

“You could tell it’s her Grade 12 year, it’s Totem, she just gave out 110 per cent effort,” Broekhuizen said. “It was an impressive performance, every rebound in her area she was getting her hands on.”

Armada lost a heartbreak game to Highland from Comox on Friday night with a final score of 54-50 and lost to Nanaimo District Secondary School on Saturday 64-53. The Armada player of the game on Friday was Memphis Dick and Raegan Dudoward on Saturday.

Dick, who is from Tseshaht, was also named to the girls All-Star Team.

“Memphis is an excellent player, she has been one of the top players in her age group for a long time, a lot of coaches know about her,” Broekhuizen said. “In our Saturday night game the team was what’s called ‘box-and-oneing’ her, so they had someone basically in her pocket the whole game, which was obviously difficult and frustrating for her. She’s just learning how to deal with the pressure of being a great player. She’s a quality player and a great human being.”

Broekhuizen said heightened nerves from his team was the most challenging part of the tournament.

“It’s not often you’re playing in front of hundreds and hundreds of people and so I think that’s what led us to getting down early in the games,” Broekhuizen said. “We were down double digits I think in all of the games that we played and we were only able to come back on Thursday night. We fell short both Friday and Saturday by a couple buckets.”

Going forward with their season, Broekhuizen plans to work on quicker starts with his team and getting baskets early in games.

The girls are headed to Victoria this weekend for the Esquimalt Fire Tournament where eight boys and eight girls teams will compete.

“It’s not quite the Totem Tournament but there’s some excitement there,” Broekhuizen said.

Totem Tournament director Greg Freethy said coaches and organizers felt the tournament was a success on many levels.

“I have spoken with most of the participating teams, many students and local fans and everyone had very positive things to say about the tournament,” Freethy said. “The attendance and support from the student body and community was amazing. This was the most well attended Totem Tournament in the past 20 years and we hope to have everyone back for Totem 66 on Jan. 7-9, 2021.” 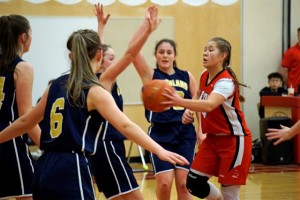 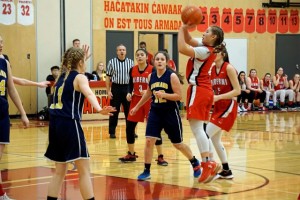 Armada's Memphis Dick navigates through a sea of Highland players during a Jan. 10 Totem Tournament game.