A march for solidarity with Wet'suwet'en hereditary chiefs opposed to the Coastal GasLink pipeline in Northern B.C. took to the streets in Tofino on Monday. (Melissa Renwick photos)

A wave of protests have spread across British Columbia since opponents to the Coastal GasLink pipeline in northern B.C. were arrested on Feb. 6 – and on Monday support for Wet’suwet’en hereditary chiefs was evident on the streets of Tofino.

With participation from members of the Tla-o-qui-aht First Nation, on Feb. 10 Friends of Clayoquot Sound held the march for the Wet’suwet’en’s opposition to the natural gas pipeline being built through their land. The show of solidarity began with a crowd gathering at the Best Western Tin Wis hotel, and the march reached the Village Green in Tofino by midday.

Participants chanted phrases like "This land is not for sale", "Stop the pipeline" and "To take care of mother earth, new solutions we must birth" as they drew attention to the stand off in the north-central region of the province.

The conflict near Smithers has prompted a B.C. Supreme Court injunction against those blocking the pipeline’s construction. The RCMP moved in to make more than 20 arrests in Wet’suwet’en territory, and over the days that followed dozens of other arrests occurred in the Lower Mainland when the Ports of Delta and Vancouver were blocked.

Joe Louie, who works for the Tla-o-qui-aht First Nation, helped organize the Tofino event to bring country-wide attention to the Wet’suwet’en’s struggle.

"Our power lies in the people that we stand with," he said.

Rosalee Brown, a resident in the Tla-o-qui-aht community of Ty-Histanis, participated in the march "to show solidarity in hopes that when we need it, they will be there for us - and that goes for every nation across Canada."

"I'm here because we have a responsibility to the planet which gives us life,” added Tla-o-qui-aht member Gisele Martin. “I support the hereditary chiefs who uphold those rights."

"We are in a crux,” stressed Tofino resident Clio O’Connell. “I have a 5-year-old son and I want him to see people are taking care of the earth and creating positive action and community through that."

Opposition to the natural gas pipeline was present in multiple Vancouver Island communities on Monday. Since Saturday protesters to the natural gas pipeline were on the front steps of the Legislature in Victoria, where major intersections in the capital city were blocked over the weekend. Further north, Monday morning drivers were forced to take a detour when Highway 19 was blocked in the Comox Valley as a sign of solidarity with the Wet’suwet’en hereditary chiefs.

The construction of the $6-billion Coastal GasLink pipeline has grown in complexity beyond what investing companies and governments had anticipated, pitting economic interests against environmental concerns, as well as contrasting the roles of First Nations’ elected councils with hereditary leadership. Extending 670-kilometres across northern B.C. for liquified natural gas export from Kitimat, Coastal GasLink has the formal support of 20 band councils along the route, First Nations that stand to benefit from cash payments and employment agreements.

Possibly the most vocal supporter of the project is the Haisla Nation, whose territory the LNG export terminal is being built on. The Haisla have opposed other resource developments in their territory, including the failed Northern Gateway pipeline. But Coastal GasLink is different, said Hailsa Chief Councillor Crystal Smith.

“This land has been our home for thousands of years. The relationship between our nation and industry has never been this healthy and open,” she wrote in an open letter supporting the project. “Industry has come and gone from our territory and not until now have we had this much influence in seeing it happen responsibly, and sustainably.”

Smith, who also serves as the chair of the First Nations LNG Alliance, has pointed to the benefits her community has already seen from this partnership, including Indigenous language programs and employment training.

“We urge you to think strongly about how your opposition to LNG developments is causing harm to our people and our wellbeing,” she continued. “Opposition does nothing towards empowering our nation, but rather dismisses our rights and title and works towards separating our people from real benefits.”

Rights and title continue to be central to Coastal GasLink opposition. Although five of the six band councils in Wet’suwet’en territory have supported the project, hereditary chiefs of the Unist’ot’en clan of the Wet’suwet’en remain against the pipeline being built through their territory. Many of the pipeline’s opponents have pointed to fact that band councils are a function of Canada’s Indian Act, while hereditary chiefs are part of a governance structure that has been in place since long before Confederation.

During a recent Council of Ha’wiih Forum on Fisheries in Campbell River, Ahousaht Tyee Ha’wilth Maquinna, Lewis George, shared his position on the escalating issue. 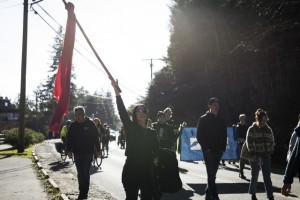 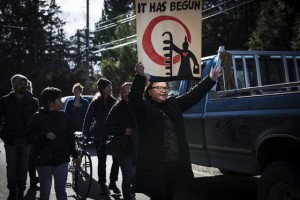 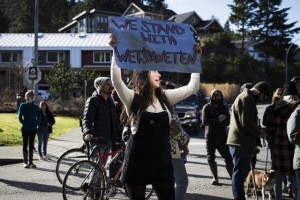 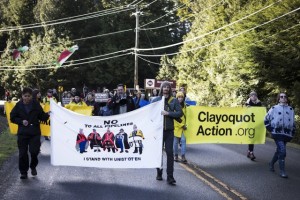 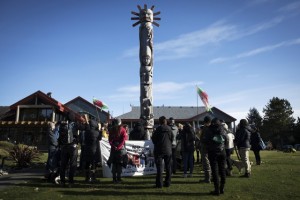 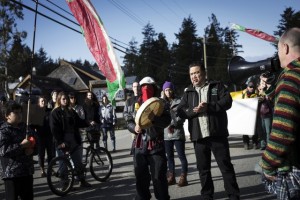