The high school squad represented Ahousaht at the provincial championships for the first time in a decade. The tournament concluded March 7. (Curt McLeod photos)

The Maaqtusiis Suns were unable to register a victory at their provincial championships.

Yet members of the Ahousaht basketball squad were still pleased they were able to participate in the B.C. senior boys’ 1A tournament, which concluded this past Saturday, March 7 in Langley.

The Suns entered the 16-team event as the Number 16 seed. The Maaqtusiis club lost all four of its matches at the tournament.

Despite some lopsided setbacks at the Langley tournament, Frank was pleased with the efforts of his players.

“I was really proud of the guys,” he said. “They held their composure out there.”

In their tournament opener the Suns were trounced 114-57 by the top-ranked Highroad Academy Knights from Chilliwack.

The Knights had a clear height advantage in this contest.

Centre Stanley Campbell is the Suns’ tallest player at 6-foot-2. And power forward Matthew Frank, who’s an even 6-foot, is the only other Maaqtusiis player to crack the 6-foot barrier.

“Probably half of (Highroad Creek’s) team is over 6 feet,” said the Suns’ coach.

Following its loss to the Knights, Maaqtusiis was relegated to consolation action. The team ended up playing three more matches to determine final placings in the tournament.

In their second contest the Suns were defeated 90-56 by Gudangaay Tlaats'gaa Naay Secondary School from Masset.

The Suns were beaten 82-74 by the Grand Forks Wolves and 72-45 by the McBride Mustangs in their two other games.

Frank, who last coached a team more than 20 years ago before deciding to take on the Suns’ head coaching duties this past December, was glad to see the club advance to its provincials.

“The guys got a good taste of what it’s like to be winning games,” he said.

Floyd Campbell, who served as Maaqtusiis’ assistant coach, was also obviously pleased the Suns qualified for the B.C. tournament.

“It was a great learning opportunity for these guys,” he said. “Now they know that they have to work a little harder.”

The Suns’ roster included two of Campbell’s sons, Stanley, who is in Grade 11 and Alden, a Grade 10 student.

The elder Campbell said his sons, as well as some other team members, have indicated they are willing to become more dedicated with their basketball in the hopes of also qualifying for next year’s provincial tournament.

“Some of them want to start training as early as May and June,” he said.

Nobody can prevent the players from staging informal training sessions together. But a rule stipulates schools are forbidden from having formal team practices during the off-season.

Floyd Campbell said the Suns were not upset with their efforts in Langley.

“At the end of it they just felt good they made it to the provincials,” he said. “They didn’t feel down about it. We made it to The Show.”

A highlight for the Suns was when one of its team members, Moses Charlie, managed to score a basket in the final stages of its final game against the Mustangs. Charlie, a Grade 10 student, only started playing basketball this past fall. His basket against the McBride team were the only two points Charlie, who is nicknamed Moose, scored at the provincials.

“When he scored the whole bunch got up,” Campbell said. “To see him finally score was great for everybody. After the game we all went into the locker room and everybody was giving him love and hugs. And they were all happy they had made it to the provincials.”

The Maaqtusiis team was one of two Vancouver Island entrants at the B.C. championships.

The Suns had placed third at their Island tournament last month in Nanaimo.

But an Island tournament rule saw the Maaqtusiis club able to challenge the second-place finishers, Duncan Christian, in a game afterwards since they had not squared off in that event.

The Suns beat Duncan Christian in that challenge game, earning a berth into the B.C. championships.

Meanwhile, the Maaqtusiis senior girls’ team also qualified for its provincial 1A tournament, which concluded in Kelowna this past Saturday.

The female Suns ended up winning one of their four contests at that event. 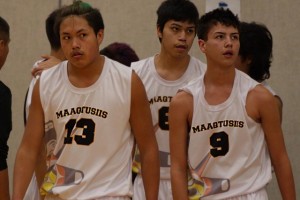 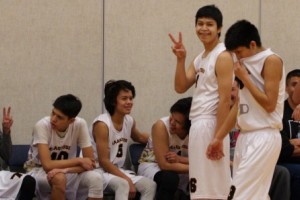