Cory Howard peels off the second layer of bark from a devil's club stem, just outside of Port Alberni, on Thursday, June 18. (Melissa Renwick photo)

In the middle of a forest on the outskirts of Port Alberni, Cory Howard shakes his rattle and sings a song. His 14-year old daughter, Alexyss, stands next to him in stillness. They are blessing a devil’s club before they begin its harvest.

Howard proceeds by cutting off the cascading leaves at the top of the plant and takes them deeper into the forest, returning them to the earth.

“Always leave what you don’t use in the forest,” he says.

The health and wellness coordinator for Huu-ay-aht First Nations persisted by shaving off the prickly, top layer of bark from the devil’s club. It’s a skill he only recently acquired after being shown by Quu’asa wellness worker, Howard Morris.

“There’s a few elders that remembered that devil’s club is medicine,” says Howard.

To keep tradition alive, he set out to learn how it’s harvested and recorded a video of the process to be distributed for Huu-ay-aht members on National Indigenous Peoples Day.

“It feels good,” he says of acquiring the skill. “You don't have to ask anyone to help out or to go out and get it. And I’m there if someone needs to learn how to do it.”

Traditionally, the plant has been used to help with coughs and colds, to help heal arthritis and to clean the liver, says Howard. Others use it as a source of protection and place a piece of the prickly stem on top of their front door.

Howard keeps a piece of it close to his chest, strung on a piece of black string tied around his neck.

Long before Howard landed his role as the wellness coordinator for Huu-ay-aht, he worked in natural resources for the nation. On his days off, he would go to his children’s schools and teach the youth about Nuu-chah-nulth culture through songs and regalia.

“I was already teaching before I started this job,” he says. “I feel guilty sometimes because I’m getting paid for it, but I love doing it and teaching it.”

His daughter, Alexyss, echoes the sentiment by saying how important her culture has become to her.

After gathering the inner bark of the plant, Howard carries it back out of the forest. It will be used in tea – the oils that seep from the bark are the medicine, he says.

He vows to return next year to check if the leaves he stored in the forest have grown into new life.

“I’m just learning too,” he says. “I think it’s better for everyone to learn part of our history.”

A pile of drums sit in Cory Howard's house. He built them during COVID-19 so that he is better equipped to teach other men how to when they are allowed to gather again. 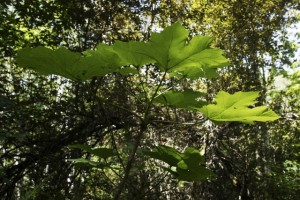 Devil's club is found in a forest just outside of the Port Alberni. 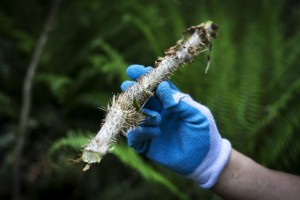 Cory Howard saves the bottom piece of a devil's club stem for safeguarding. 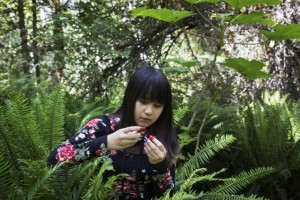 Alexyss Howard, 14, eats fresh salmonberries in the forest just outside of Port Alberni. 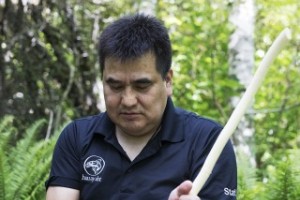 Cory Howard peels off the second layer of bark from a devil's club stem. 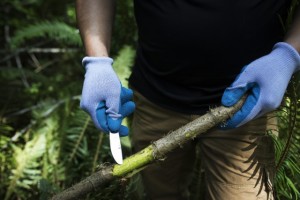 Cory Howard scrapes off the top layer of bark from a devil's club stem. 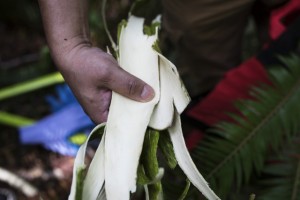 The second layer of bark from a devil's club is used as medicine. 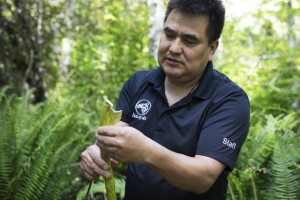