Margaret Amos dances with others on July 12 at an event on the south end of Buttle Lake in Strathcona Park remembering missing and murdered Indigenous women and girls. (Eric Plummer photos)

It’s been over a year since the National Inquiry into Missing and Murdered Indigenous Women and Girls delivered its 1,200-page report to Prime Minister Justin Trudeau. But despite the three year, $53.8-million federal initiative that gathered testimony from 2,380 people across Canada, August Johnson has yet to hear any news about the disappearance of his niece years ago.

Norma Johnson went missing from what has become known as The Highway of Tears, a 725-kilometre stretch between Prince George and Prince Rupert where dozens of women have been murdered or gone missing since 1970.

Like some cases of missing women, details around Norma’s disappearance are in short supply. August reflected that the lack of answers continues to burn with sadness for the family.

“It’s the word ‘missing’,” he said about his niece’s disappearance. “We’re looking in the universe in all directions, looking for an answer.”

Margaret Amos is also looking for answers after she lost her sister 37 years ago in Vancouver. When Pauline Johnson was murdered in her early 20s, she left behind three children and an extended family to struggle with the tragedy.

“She was catching the bus at the Lions Gate Bridge and they found her at the railroad tracks,” said Amos. “My dad had to go identify her. She was stabbed 65 times, and to this day they have never found out who killed her.”

The case is still considered open, and police update the family each year on any new details, but charges have yet to be laid, said Amos.

“My dad and his brother wanted our family to stay together as one,” said Amos, “so we would try to work together all the time.”

Before the National Inquiry began, August ventured to a Prince George gathering in 2016 for families of missing or murdered Indigenous women and girls. Many at the event lost loved ones on the Highway of Tears, leading August to sing the Grease Trail Song in their memory. The song is named after a trading route First Nations used for thousands of years that linked the Pacific coast to B.C.’s interior.

“It was for them to carry on their journey so that they may be found some day and be brought home,” said August of the song. “Their spirits are still on the highway, still doing their walk, waiting to be found.”

On July 12 another event was held for families of Indigenous women and girls who have been tragically lost – this time on the shore of Buttle Lake at the western edge of the Mowachaht/Muchalaht First Nation’s territory. As the sun set behind the mountains that cradle the lake in the warm summer twilight, families of those who have been murdered or gone missing posed for photographs. Many women wore red dresses, attire that has come to symbolize the multigenerational tragedy that has affected so many Aboriginal families across Canada. According to the National Inquiry, Indigenous women face a homicide rate four times that of the rest of the population.

Kara Puetz is one of event’s organizers, and plans to have portraits of the participants available for viewing online.

“I hope that they leave feeling empowered and supported,” she said.

The event also holds a personal importance to Puetz, as her great grandmother, Adeline Caisse, was murdered.

“She was murdered at 40 years old, leaving behind my grandmother and her siblings,” said Puetz, who is Cree-Metis. “When they came to take the children to residential schools, my grandmother was the oldest.  She was left behind to take care of the infants, however her school-aged siblings were forcibly taken from the home.”

“I think that there’s multiple systems that keep voices very quiet, it’s very systemic,” commented Kaitlyn Nohr, who also had a role in holding the event.

She hopes that the gathering and portraits will ensure the families and their lost loved ones aren’t forgotten. As a social worker, Nohr is compelled to enrich her understanding of Indigenous families who have lost women and girls.

“I have a role that comes from a position of power and oppression,” she said. “For me it’s important to be as close as I can as an ally with folks who have direct experience and lived experience. I see the impact of issues like this every single day.”

For many affected by the continued disappearances and murders of Indigenous females, Canada’s justice system is broken. August Johnson noted that families attended the July 12 gathering who had lost women to Robert Pickton, the notorious serial killer who admitted to killing 49 women, was charged with 26, and ended up receiving six second-degree murder convictions in 2007.

“I question about the law system,” said August. “If someone gets murdered, people get one year, two years, but if they kill a white person, it’s 10, 20 years. It’s a huge difference, the balance is not there.”

Puetz hopes to give attention to how the National Inquiry’s Calls to Action are being implemented in Canada. So far just eight of the 231 recommendations have been met, she said.

“Our government is still failing to act, so it’s important that we bring awareness,” she said.

Several children also came to the event on Buttle Lake - sometimes listening to the stories, singing and drumming - other times playing on the shoreline, chasing countless tiny frogs that scrambled across the rocks.

“To look at what we have today, all these little usma, little children that are here, we must teach them about life, how to live, how to honour the special ladies here,” said August. 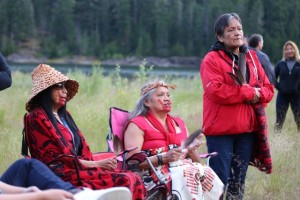 Margaret Amos stands next to her sisters Lenora Johnson (left) and Barbara Wells. 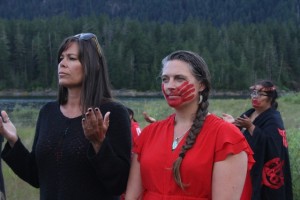 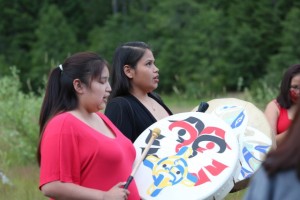 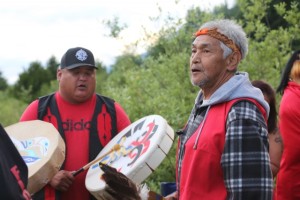 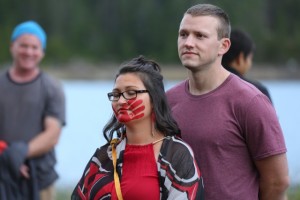 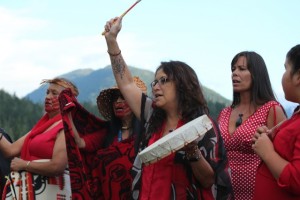