A panorama of the Big Bar Slide shows progress made so far at the site south of Lillooet. (DFO photo)

More than a year after discovery that the Big Bar Slide had effectively blocked B.C.’s most important salmon pathway, sockeye are finally moving up the Fraser.

Sockeye and chinook were holding en masse in the lower river below the landslide due to historically high river levels, record flows that only began to subside in late July. Not until July 25 were sockeye observed at Big Bar.

The delayed migration isn’t the only factor worrying all who have a stake in the province’s largest and most vital salmon watershed. Increased flow combined with higher sediment loads in the river are taxing fish even before they get to Big Bar near Lillooet, said Gwil Roberts, director of the tripartite response team that includes Fraser basin First Nations.

“This is a concern for Fisheries and Oceans Canada,” Roberts said during a media briefing July 27. “Salmon are more tired and have to rest more often. The river is having a heavy impact on that biologically inherent push. Yes, it will affect spawning.”

The last media briefing on the Big Bar emergency was held in June, when the annual waves of Interior-bound salmon were expected to reach the slide in significant numbers. That did not materialize. Fewer than 300 salmon were radio tagged below the slide. Another 125 salmon had made natural passage, overcoming the force of the falls. Only 128 fish had been counted 40 kilometres upstream from the slide. Within the past week, sockeye at last began arriving by the hundreds.

Higher than average snow packs and spring precipitation combined to make the annual freshet intense and sustained. For almost the entire spring and early summer, the river has been in flood, its flow 60 to 70 per cent above average. At its peak, the river reached 7,800 cubic metres per second (cms) at Hope. The critical point is considered 5,000 cms.

“Only when it drops below that do we see many fish moving,” said Michael Crowe, the response team’s manager of biological services.

High flows have made it more challenging for workers at the canyon site as they have had to work around river fluctuations within an already constrained schedule.

“We’re definitely in an event … well within the very highest water flows ever recorded there before,” Crowe said.

Response team members remained confident, however, that mitigation measures now in place will enable salmon to reach spawning grounds in the Interior.

“We are very happy to say we have all the transport mechanisms in place,” Roberts said.

Peter Kiewit Sons, the main contractor responsible for river channel clearing, was able to clear only a portion of the slide debris during a limited winter low-water period.

As a result, the team has had to adopt mitigation measures. These consist of a system of pumps and tubing called the Whoosh, the primary means of getting fish past the slide. Six tubes of various sizes are designed to accommodate salmon of all species and age classes. The tubes must be raised and lowered continuously to correspond with the fluctuating river.

By the end of July, about 1,000 sockeye had passed through the tubes. B.C. River Forecast Centre predicts river levels will continue to drop in the coming days, another encouraging sign.

Beach seining in tandem with truck transport around the slide are used as a backup system.

Netting and angling the salmon allows an opportunity to tag fish and capture brood stock for enhancing vulnerable populations. Once identified, these fish are sent to hatcheries at Cultus Lake and Vanderhoof. Fish from more resilient stocks are released above the slide to continue their journey to spawning grounds.

The river flow situation further complicates what First Nations leadership in the province view as a salmon emergency of the highest order of magnitude.

“Extreme efforts and resources must be put forth immediately to preserve cultures and a way of life that have existed for thousands of years,” Terry Teegee, B.C. Assembly of First Nations regional chief, said last winter, trying to spark the strongest possible response to the situation.

If the crisis hasn’t hit T’aaq-wiihak salmon fisheries so far, it’s only because DFO hasn’t allowed west coast catches of Fraser-bound stocks for many years. The sole exception occurred two years ago, at this time in the season, when boats from Ahousaht, Ehattesaht/Chinekintaht, Hesquiaht, Tla-o-qui-aht and Mowachaht/Muchalaht were allocated one percent of 14 million returning Fraser sockeye during a peak in the four- to five-year cycle. Roughly 30,000 fish were harvested, generating an estimated $1 million, a welcome boost to local west coast economies.

Hopes that T’aaq-wiihak fisheries might see more such openings now seem even less likely — at least in the near future — as a result of Big Bar. For the dozens of First Nations within the vast Fraser River basis, the stakes are far higher.

A salmon count for Big Bar passage, updated daily, can be found at http://www.pac.dfo-mpo.gc.ca/pacific-smon-pacifique/big-bar-landslide-eboulement/smon-count-denombrement-eng.html. 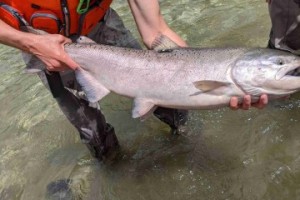