With a hunched back, Kyle Adams, wheel barrowed gravel down a dimly lit culvert underneath the highway leading into Tofino. Murky water pooled around his ankles as he dripped with sweat, careful not to slip.

Alongside a team from Central Westcoast Forest Society (CWFS), Adams helped to fill the metal culvert, which connects Mackenzie Creek, with gravel and boulders.

“It’s going to reduce the velocity of the stream so it’s not just going to come shooting through that culvert,” said Chris Dolphin, environmental monitoring coordinator for CWFS.

During winter months, the heavy rain would create an impediment for fish, he said.

According to the Mackenzie Creek Culvert Assessment Summary, it is unknown whether any work has been done to the culvert in 15 years.

The addition of gravel and boulders create little eddies and pools that provide velocity relief. By mimicking a riverbed, it allows for safer passage of juvenile fish to move downstream, while simultaneously making it easier for fish to get up the creek.

Adams, who is from Tla-o-qui-aht First Nation, has been working as an environmental monitor for CWFS since 2012.

With many of B.C.’s salmon stocks in peril – including the Fraser River sockeye run, which is expected to be the lowest return ever recorded ­– Adams said projects like these are helping to make a difference.

“I feel accomplished looking back at the work later on,” he said. 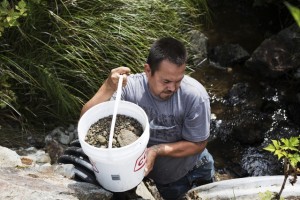 Kyle Adams, an environmental monitor with the Central Westcoast Forest Society, loads gravel into a wheelbarrow to be unloaded in the Mackenzie Creek culvert. 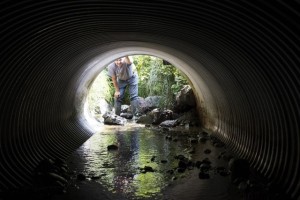 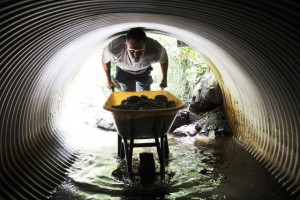