The sun rises in the remote village of Houpsitas, which sits in Kyuquot Sound, on the western edge of Vancouver Island, on August 14, 2020. (Melissa Renwick photos)

Leading up to the New Year, Lucy Paivio kept close watch on the news. As information started to spread about the imminent pandemic, she knew that she had to get out.

Before there was any talk about going into lockdown, Paivio begged her husband to make one final trip from their home in Kyuquot to Campbell River. It was the beginning of March and the global frenzy was cautioning her to load up on groceries.

“Every month I saw it getting worse and worse and then it finally hit home – in Canada,” she said.

Unlike others, Paivio wasn’t driven by fear.

“I got brought up believing in our creator,” she said. “When he tells us to go into hiding, it’s for a reason.”

Once Paivio returned from Campbell River, she listened to her ancestral teachings and stayed holed up until early June.

Despite already living in a small, isolated community, residents in Kyuquot feared the unknown.

“It’s like a ghost is there,” said Janice John-Smith. “What if we meet up with that ghost and get sick?”

For John-Smith, the anxiety of catching COVID-19 was crippling.

“I was so worried about our family,” she said. “I reminded them every day [that] this is happening – we’re still in this pandemic.”

The 58-year-old shares her house with her husband, two children and six grandchildren. They usually have an open-door policy, but from the onset of lockdown in Kyuquot, John-Smith laid out strict house rules.

“I keep telling my kids, ‘I’m not strong enough to fight this virus if we ever get hit by it’,” she said. “So we all worked really hard to keep our home healthy.”

From March 21 to June 18, food distribution trucks drove through the community’s streets every two weeks. Residents lined up with boxes, totes and wheelbarrows to collect their share of the food. The First Nation dispersed fruits, vegetables, flour, meat and canned goods to help residents get through the pandemic and limit their need for essential travel.

John-Smith remembers lining up for the first time. She was overcome with emotion after seeing how her nation stepped up to help feed the community.

While it was well intentioned, Marilyn Short, Ka:'yu:'k't'h'/Che:k'tles7et'h' First Nations legislative clerk, said that without grocery expenses, some used the extra money to buy alcohol.

“They were getting it shipped by Air Nootka every mail day,” she said. “People were getting hurt because they were so drunk. Falling down stairs [and] breaking bones.”

It was a sentiment echoed by Paivio.

“It affects the community because we worry about the fighting drunks,” she said. “We have to deal with it – we’re the ones that get hurt. The sober ones have to face it.”

John-Smith kept to herself. Before any of the distributed food entered the house, she washed every item in water that was mixed with bleach. Other than those she lived with, no one was allowed inside – not even her daughter who lives a block away.

“We’re such a small community – we can go just like that,” she said, snapping her fingers. “We’re too small to get this – our community is too small.”

When the kids started getting cabin fever, John-Smith would load them into her boat and take them to a nearby beach so they could be free.

For John-Smith, there were rare moments of reprieve, like when her oldest granddaughter asked for guidance on how to make a shawl.

“She’s never had the patience for beading and sequins,” she said. “We worked on it for days. She said it really calmed her.”

Eventually, the stress took its toll and on July 2, John-Smith was flown to Victoria to be treated for a heart attack.

“I was so stressed out from this pandemic that it made me sick,” she said.

While John-Smith is recovering well, her fear of COVID-19 remains.

“I’m still afraid,” she said. “It’s still there. I really believe the second wave is coming and our numbers are up in B.C. – I remind my family all the time, ‘it’s going to come and we don’t want to get it’.” 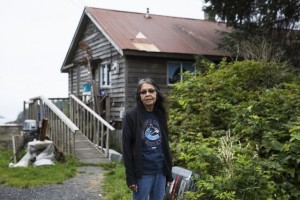 Lucy Paivio poses for a photo outside her home in Kyuquot, on August 13, 2020. 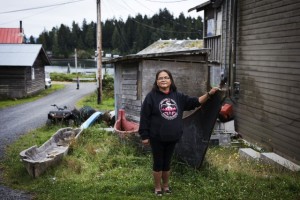 Janice John-Smith poses for a photo outside her home in Kyuquot, on August 14, 2020.