When classes resumed in Ucluelet for the first time in six months last week students had to adjust not only to rigorous new health and safety rules but to a campus transforming under their feet.

Long awaited seismic upgrades and renovations to Ucluelet secondary and adjoining Ucluelet elementary had not begun when COVID-19 forced the abrupt shutdown of school operations across the country in March. Demolition and construction work started in May, subject to strict pandemic work practices, progressing toward a spring 2022 completion.

When B.C.’s seismic upgrade program was introduced in 2005, the goal was to have all projects done by 2020. Instead, government spending restraints limited progress in the early years of the program. Only about half of the 347 schools listed have undergone upgrading to meet earthquake tolerance standards, although there has been an acceleration in the last couple of years.

Each project is different, said Jim Alkins, project manager for the Ucluelet upgrades. Alkins has overseen school seismic upgrades around the province since the 1990s.

“There’s a fair bit to this project because there are two schools on site and we’re often trying to deal with operating schools, which makes things a little more challenging,” he said.

At a projected cost of $44.8 million, both schools are undergoing extensive structural strengthening while the secondary complex, with its oldest building erected back in 1947, will be partially replaced.

While the elementary upgrade is fairly straightforward, the secondary component is more complicated, Alkins said.

At Ucluelet secondary, lead contractor Unitech Construction Management is replacing four of the school’s five blocks, those containing classrooms, a library, music room and administration facilities. A new academic block and gym block will be linked by a breezeway to a new child care facility.

Each component has its own unique design requirements, Alkins said. In addition, the site required blasting while the soil had to be compacted to improve seismic resistance then terraformed.

“Phasing requires removal of the existing two-storey block to make room for the new gym block,” he explained.

Elementary students, meanwhile, have been temporarily relocated to the secondary school’s second storey.

“It’s a fairly complex process of being able to move students around,” Alkins said.
“There’s lots of co-operation between the two schools to make this work.”

An elevator is being added to the elementary school along with various other upgrades in three phases over a one-year period. The work includes doubling the size of foundation footings, adding what’s known as shear walls, using plywood to provide greater horizontal stiffness, and installing a new roof that has more connections to the walls.

“You have this continuance of patterns of stiffness,” Alkins said.

The extent of construction requires removal and rerouting of utilities in co-ordination with progress on the overall project.

B.C.’s education ministry works with the Engineers and Geoscientists BC (EGBC) to assess seismic risks to public schools and set standards. Upgrades are designed to meet the latest B.C. seismic retrofit guidelines, last revised in 2017. National building code changes five years ago reflect increased assumptions for ground force motions. In other words, seismic upgrades are now designed to withstand twice the intensity of shaking previously assumed, the level of intensity expected from a Cascadia Fault subduction quake off the west coast of the Island.

Alkins sits on a provincial committee that includes the Ministry of Education, UBC experts and the top structural engineers in B.C. who consult with peers in California.

“There’s quite an international community that deals with seismic events all around the world,” he said, adding that the intent is to learn from earthquakes in other locations. “Obviously, engineers are interested in getting it right without overdoing it and spending more than necessary.”

Demolition over the course of the summer included removal of the principal’s office, so Carol Sedgwick is starting the year in a temporary setup.

“It’s definitely more challenging with the pandemic protocol, but we’re getting used to it,” the principal said cheerfully a couple days after reopening.

Sedgwick and her staff met repeatedly last year with school district, architect Patrick May and the project management team to develop an overall vision and design. May’s design bears a West Coast theme.

“It’s been quite an experience and we’ve been able to share with the students and the community to get input from them as well,” she said.

As for day-to-day operation alongside construction, “It’s a delicate balance between allowing education programs to continue and making room for construction to take place because, obviously, we’re in some of these spaces,” Sedgwick said.

They’ve had to adapt with scheduling changes, temporary suspension of trade programs and “a few other inconveniences,” but the overall project bodes well, she added.

“What an opportunity for our kids and future families.”

Reuniting with 200-odd students after a six-month hiatus has been an experience in itself, although about 20 percent returned briefly in June.

“Oh my gosh, I’m going to get emotional here,” Sedgwick said. “It was so beautiful to see our kids back in school.”

Even if students were uneasy about attending school, they wore big smiles, reunited with peers.

“Everybody has a level of comfort and anxiety going into this because this is all uncharted times … but fortunately, health and safety is the pillar they’ve built everything on,” Sedgwick said.

The new neighbourhood learning and child care centre will bring with it a dual purpose as a community emergency shelter, backed up with a generator funded by the District of Ucluelet. 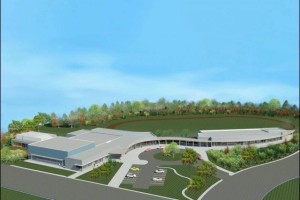 An architect’s rendering of what Ucluelet secondary and elementary should look like once seismic upgrades are completed. (M3 Architecture image)