Cox Bay Beach is busy with surfers despite being blanketed by wildfire smoke, on Saturday, Sept, 12, 2020. (Melissa Renwick photos)

For years, a large piece of winding driftwood has been stationed on Chesterman Beach. It has become an iconic meeting place for residents, who can tell you exactly where it stands.  Carved into it are the words “we are all one.” It has withstood countless wicked winter storms, but has been forever marked by a beach fire gone rogue this summer.

A black circle is now etched into the wood’s surface and its destruction serves as a daily reminder of the costs of Tofino’s tourism economy.

As the province of B.C. transitioned into Phase 3 of its restart plan at the beginning of July, Tourism Tofino launched a recovery advertising campaign.

With the loss of international tourism, which makes up 25 per cent of Tofino’s summer visitation, the organization was unsure what travel would look like in the wake of the pandemic.

The campaign only lasted 10 days, as it became evident that there would be no shortage of bookings. Although resort bookings dropped just over 20 per cent in the month of July, occupancy levels for August are expected to be similar to 2019, said Nancy Cameron, executive director of Tourism Tofino.

What many thought was going to be a soft opening, turned into a summer unlike anything they had seen before. A continuous convoy of tourists flooded in from all over the country, leaving ashes from illegal fires, along with empty beer cans, cigarette butts and toilet paper strewn in the surrounding forests.

“People don’t have that respect for this part of the world,” said Terry Dorward, Tla-o-qui-aht Tribal Parks project coordinator. “It’s going to take some educating. People who come into Tla-o-qui-aht territories need a constant reminder that they need to be respectful and leave it how it was.”

Unable to keep up, public sites like Cox Bay Beach became overrun, with parking spilling out onto the narrow highway leading into town.

“It’s a matter of time before there are more accidents,” said Osborne. “I think a lot of people are familiar with the kind of congestion and safety issues that Cathedral Grove has experienced and that’s what we’re seeing this summer along the highway. It’s really important for us to work with the Ministry of Transportation and Infrastructure on that. They have put in a little bit of new signage, but it doesn’t go far enough and I think we all realize that.”

The ministry, which is responsible for the highway leading through Tofino, said that it is working with the DOT to identify areas of concern and has installed parking signs on the road near Cox Bay Beach entrances.

A spokesperson said that they are “aware” of the challenges, but didn’t offer any further comment about solutions.

While there are unaddressed safety concerns with the increase of visitors, there are also deep cultural and ecological consequences, said Julian Hockin-Grant, Tribal Parks Allies Coordinator.

“I think there’s a very fair argument to be made saying the First Nations, more than anybody, bears the cost of tourism,” he said.

The traffic on the beaches makes it difficult for First Nations to participate in cultural activities without a crowd gathering to take photos.

“That has a psychological cost,” said Hockin-Grant. “And there are, of course, ecological costs to people walking all over the beach and trampling habitat for sand flies, which feed herring.”

“It is overwhelming,” said Saya Masso, Tla-o-qui-aht First Nation tribal administrator. “I think everyone is surprised at the amount of tourism.”

In effort to try and mitigate some of its impacts, Tla-o-qui-aht First Nation established the Tribal Park Allies program. The program aims at partnering with local businesses to ask that their clients contribute one per cent of their sales.

The funding will go towards the “ecological protection and restoration of the Tribal Parks ancestral gardens and the resurgence of Tla-o-qui-aht culture and governance,” according to the Tribal Park Allies website.

“[Tourists] are coming here to see healthy watersheds and rivers and salmon runs and forests,” said Masso. “We think a penny on the dollar from a client is fair and that they would be more than willing to pay that [to] see continued stewardship and better regional services.”

With only 37 business operators signed up as Tribal Park Allies, Hockin-Grant is asking that more businesses become an ally.

The Surf Grove Campground is one of Tofino’s newest business to operate off of Cox Bay Beach, and has not joined the Tribal Park Allies. While Shane Richards, managing partner of Surf Grove Campground, acknowledges that the beach is public property, he said “we care for it as our own.”

“Guests are reminded that fires are not permitted on Cox Bay at the time of booking, at check-in and anytime they buy firewood,” said Richards. “We have added signs facing the beach and the campsite reminding people of this. We have an ambassador [and] guest services team member walking the property and interacting with our guests throughout the day to remind them to clean up after themselves. We have on-site staff tour the property and beach at 9 p.m., 10 p.m. and 11 p.m. daily.”

Choosing to operate as a tourism destination was a conscious decision the community of Tofino made three decades ago, as residents did not want to function as a resource extraction economy, said Osborne.

“I think now we’re coming to terms with what that means to be dependent on a eco-tourism economy and it is time to make some big, hard shifts,” she said. “[The Tribal Parks Allies] is a more regenerative model, using the profits of tourism to invest back into communities and into the environment.”

As the summer comes to a close, the tourists are trickling back home. While residents can go back to enjoying Tofino’s beaches without all of the crowds, scarred logs and discarded trash now lines the coast – left behind for them to clean up.

“We need to operate with our eyes open and make change for the better,” said Masso. “We want to implement a system that manages for abundance, not for sustainability.” 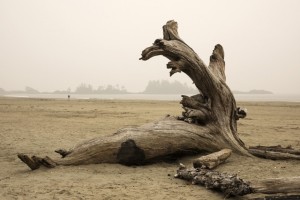 A burn mark is left on a piece of driftwood on Chesterman Beach in Tofino, on Saturday, Sept, 12, 2020.