The sidewalks and businesses of Pandora Street in downtown Victoria, once buzzing with people, have quieted down considerably since the start of the COVID-19 pandemic. Prior to March, hundreds of homeless people were camping on the grass medians in tent cities, allowing for easy access to support services operating in the area. But city bylaw enforcement and pandemic safety measures have forced the homeless indoors or to other areas.

By late spring, enforcement officers descended on the area, clearing campers and their debris away. The tents are gone from the median, having moved to designated parks around the city, most notably Central and Beacon Hill Parks. But still, a few gravitate toward Pandora Street, where they mingle, maybe share a smoke and a coffee at the various outreach service centres there. Some do their illicit drugs at the location.

Today there is a sense of being caged as one walks down Pandora Avenue. The grassy boulevards and business entrances are now surrounded by tall metal fencing in an effort to keep people out. The signs of the caging say it is closed for remediation.

Herb Dick, 38, of Ahousaht knows many of the Indigenous street people that congregate on Pandora or in the encampments. He works for an outreach team delivering food, services and support to the Aboriginal people living in the street. In pre-pandemic days, Dick said he would start at 5:30 a.m. making what he called “goodie bags” to hand out. Each bag was filled with snacks and harm reduction supplies. He would deliver the bags to people living in encampments around the city in about five locations.

No decrease in tents

Back in 2018, The Homeless Hub counted 1,525 people in Victoria without a place to live. Even though dozens of shelter units and government-purchased hotel rooms have been filled this year, the number of tents does not decrease for long. Currently Dick says that there are an estimated 270 tents in various parks in Victoria.

“People (across Canada) think B.C. is warm so they come here,” said Dick.

Efforts to get the homeless indoors for the winter have been working, and people are accepting accommodations offered to them, but it seems more are coming into the city from other places.

Dick says since the start of the pandemic there have been huge changes in downtown Victoria. Since people cannot go to a soup kitchen to eat due to social distancing guidelines, food is now being prepared, bagged and delivered to those in need.

“There are six or seven agencies all offering support services like harm reduction and wellness checks,” said Dick.

He noted that the provincial government bought four hotels in Victoria in an effort to get people off the street and they are filled. He said it is mostly Indigenous people that moved into hotel rooms, adding that he didn’t know if it was by design or if Aboriginal people are just more willing to get off of the streets than other people.

Dick said that there are some that have been in the streets for decades and there are a few people that don’t want to leave the streets.

The streets can make you unrecognizable

Sept. 28 was a warm, sunny day at Victoria’s Central Park, located on Vancouver Street behind Crystal Pool. It had rained the day before and many of the people living in the encampment had clothing and sleeping bags slung over the chain link fence that surrounds the park.

There is a single blue port-a-potty beside the fence next to an overfilled dumpster. Small clusters of people mill around some tents, but it is mostly quiet on a Monday afternoon.

According the Dick, this is the time of day everyone is resting under the warmth of the sun; they mostly go out at night. As he prepared to make his rounds, Dick advised that there were two Nuu-chah-nulth people living at that particular encampment, but their tents were gone that day. Dick said he hoped that they had been transitioned into hotel rooms, where they would have meals delivered to them.

Still, groups of support workers from different organizations make their way from tent to tent. There were at least 50 tents in Central Park, and many more in the picturesque gardens of Beacon Hill Park.

You can’t knock on a tent flap so outreach workers announce themselves as they approach. Most outreach workers offer food, harm reduction kits, nursing services and assistance to get into whatever accommodation is available.

One team approached an open tent with a man and woman inside. They called out, announcing who they are and asked if they needed anything. The man asks for a Naloxone kit and the woman asks if the nurse could check her injured ankle. The team gives the couple the kit, yogurt and a cigarette in what was a friendly exchange.

Dick says that Indigenous people make up about five per cent of Victoria’s population, but he estimates that about 50 percent of the homeless people are Indigenous.

“There’s at least a few dozen Nuu-chah-nulth here,” Dick said, noting that sometimes even close relatives can be hard to recognize. “The streets beat you up. They look good sometimes but can deteriorate fast.”

Why does he do this kind of work?

“There is a personal part that draws me to this,” Dick told Ha-Shilth-Sa. “I have had losses in my immediate family (to the streets); I guess I could have been here too.”

Dick lost a brother and other close relatives to the streets.

“We were absolutely devastated by the loss and it hit home because there was no difference between us and the ones we lost,” he added.

He and his wife were on the same path.

“I was tired of going in circles…I was part of the problem and I decided enough was enough,” he shared.

A recent Point-in-Time (PiT) count of the homeless supports Dick’s estimation of the number of Aboriginal peoples on the streets. A count was conducted in March 2020 in Victoria. At the time there were 1,523 homeless individuals. Of that number, 35 per cent - or 299 individuals - identified as indigenous. According to the 2016 census 4.7 percent of Greater Victoria’s population identified as Indigenous.

It is believed that the most recent PiT count is an underestimate as people may have been avoiding contact with others at the start of the pandemic.

The top reasons for displacement, according to the Greater Victoria Coalition to End Homelessness, are the high cost of rent, low income and lack of housing inventory. Other contributing factors include job loss, family break-up, mental illness, addictions and lack of affordable housing. The coalition identifies other factors that put Indigenous people at risk for homelessness such as having been in foster care and/or residential schools.

“Much of the literature shows the interrelated connections between the effects of colonization and residential schools with homelessness,” says a report by the coalition.

More than half of the Indigenous people experiencing homelessness in Victoria have been in foster care.

Even with no end in sight, Dick remains positive. He is moving onto a new job. Sept. 28, was his last day of outreach work.

“I am moving to housing support,” he said, adding that he was excited to help people move indoors.

“I hope to have a First Nations room somewhere in the downtown area that would offer support services to people in need,” said Dick. For now, they are focusing on getting people off the street to help with detox and medical treatment.

If there is a silver lining, Dick, says it is this: “COVID is like a magnifier showing the public what is wrong with our society.”

He said that there is a resilience in the street community; “a sense of community that is missing from our (mainstream) values. They look out for one another.”

Dick pointed out that some agencies serve only certain groups in the encampment while others do not discriminate, serving everyone that needs it.

“People down here have a First Nations way of handling things; they will give you their last dollar if you need it more than they do,” said Dick.

He believes this kind of thinking could change western mentality. 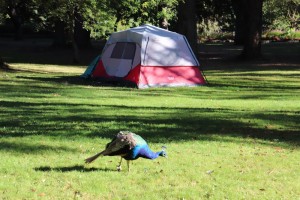