The skipper and crew of the Mowachaht/Muchalaht First Nation's water taxi is pictured in 2019. (MMFN photo).

Gold River, a small village municipality nestled in the mountains, has a separate waterfront 12 kilometres down Highway 28 at Muchalat Bay.

The unusual degree of separation stems from another era and a resource development boom in B.C., when Tahsis Company built the town to house employees for its pulp mill located in the river delta at the head of Muchalat Arm.

Gold River District was incorporated in 1965 — acquiring a reeve and village council before it had residents — with municipal boundaries including portions of the river delta. Gold River Village was incorporated seven years later, Canada’s first all-electric community and the first to have underground wiring.

The community thrived until forest processing and fishing steadily declined through the 1990s. When the mill closed in 1998, the town lost half its jobs and a $1.8-million chunk of its tax base.

Two decades later, the landscape and times have changed dramatically. Since 2018, the village has been piecing together components of an economic development strategy to guide growth and development in the valley, rebranding and reinventing itself as a west coast tourism hub.

Another puzzle piece fell into place earlier this month when the municipality confirmed the start of a waterfront planning process with kickstart funding from Island Coastal Economic Trust.

“Gold River is now considered a tourism gateway to Nootka Sound, and the waterfront represents incredible potential to current and future users,” said Mayor Brad Unger. “Our vision for the waterfront is a place that supports and promotes a rich diversity of local economic activity and improved access to the incredible Muchalat Inlet.”

Mowachaht/Muchalaht First Nation (MMFN) has been integral to the planning process, having helped to shape the economic development strategy.

Ahaminaquus, a former village site where Mowachaht/Muchalaht residents from Yuquot were persuaded to resettle in the 1960s, lies squarely in the middle of the river delta. In Ahaminaquus, residents lived in the shadow of the pulp mill until health concerns led the village to resettle at Tsaxana, closer to Gold River.

MMFN operates a boat ramp in the river delta and plans to develop a campground and RV site at Ahaminiaquus with construction starting as early as this spring. In 2019, MMFN upgraded its water taxi service based at Muchalaht Marina, a tourist link to Yuquot where additional improvements are planned.

The waterfront is considered critically important to multiple sectors.

“We don’t really have a strategy for the waterfront now,” he added. “We do have some businesses interested in seeing improvements.”

“It’s our only access to the ocean,” said Rachel Stratton, a village councillor and member of Gold River’s economic development committee. Gold River, as with Bamfield and Anacla to the south, is more landlocked than other Island communities.

Tourism development is an obvious choice for the picturesque valley, bounded by Nootka Sound and Strathcona Provincial Park.

“I love the fact that we’re diversifying in small pieces,” Stratton said. “We’re not relying on any one big industry, which I think is a very good plan for a community this size.”

In 2020, Gold River was ranked No. 9 in the Top 10 B.C. municipalities for growth as a percentage of population.

“The changes I’ve seen in the last few years,” Stratton said, noting the population rose by 50 in the 2021 census count. “There was a lot of rental housing here; now you’re lucky to find a rental.”

Last year, the municipality opened up 55 serviced lots on a two-hectare parcel southeast of the village in an effort to spur development of more housing. As a realtor in addition to her civic duties, Stratton usually has about 20 homes listed; now she’s down to five.

“It does feel busy,” she said. “We are getting more people coming in all the time.”

The village recently acquired cellphone service, installed a centrally located information kiosk for visitors (another project supported by ICET Quick Start funding) and will soon have an EV charging station in operation. A Co-op store is expected to open this spring, six years after the last one closed, and a new RCMP detachment is going in as well.

On the waterfront, change is coming through innovation. Grieg Seafood is developing land-based salmon farming at its waterfront hatchery, an important employer in the community for 22 years. As well, Gold River Aquafarms, a Campbell River company with U.S. investors, plans to develop a land-based steelhead farm on land formerly occupied by the mill, confident they can repurpose existing buildings.

Through the planning process, a preliminary analyses of stakeholder needs will inform an early redevelopment concept for the area. Roy said a consultant still has to be hired before the process can begin. He also stressed the need for wide consultation.

“Our goal is to get it right and that’s why we want to engage with stakeholders,” he said. “It’s really just the early stages of starting this.”

The idea behind ICET’s Quick Start program is to provide small communities with limited resources, including First Nations, the necessary means to advance from recently completed strategies to implementation. 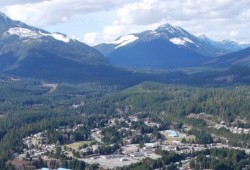