A rally was held today at the Nanaimo Daily News to protest the printing of a letter that spouted hate-filled ignorance against First Nations people. About 300 people attended the rally, including Nuu-chah-nulth Tribal Council President Cliff Atleo.

Here's the statement from the Nuu-chah-nulth Tribal Council:: http://www.hashilthsa.com/news/2013-03-28/ntc-cuts-ties-publication-printing-hate-filled-letter

Photo 1: A roar went up through the crowd when the President of the Nuu-chah-nulth Tribal Council Cliff Atleo announced that Ha-Shilth-Sa would no longer be printed at the Nanaimo Daily News press, exercising their economic option to choose companies to work with that show First Nations people respect--Iisaak.

Photo 2: The rally organizers had placards made up that argued against hate speech.

Photo 3: The rally went inside of the Nanaimo Daily News office. Publisher Hugh Nicholson addressed protesters of an offensive letter published by the paper, saying that if they wanted to choose four or five delegates he would speak to them. He was persuaded however to address the crowd outside. He was soon swarmed by reporters, made a statement and headed back in behind a quickly locked door.

Photo 5: Assembly of First Nations Shawn Atleo flew from Vancouver to attend a rally at the offices of the Nanaimo Daily News March 28. He told leaders of the Nanaimo area, including Chief Douglas White of Snuneymuxw First Nation, and the Mayor of Nanaimo John Rutton, that there will be some fall-out from the printing of the offensive letter. The business community will feel the effect. He said Vancouver Island University President Ralph Nilson has offered some space to bring all the people together to discuss the situation and move toward resolution. He left the planning of that to the organizers of the rally. 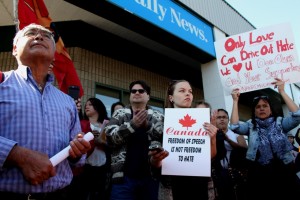 Approval from the crowd 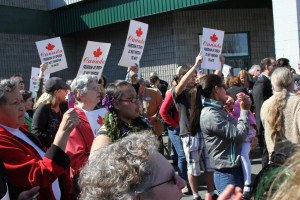 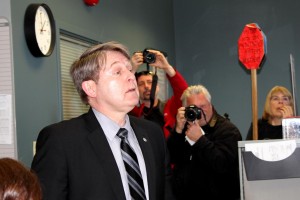 Publisher of the Nanaimo... 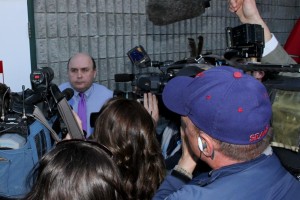 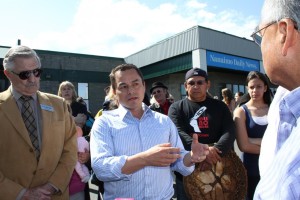