Tseshaht fishermen brush up on the latest rules and regulations

MacLeod led off with a short presentation on marine enforcement issues and regulations, starting with a well-watched YouTube video of a marine accident.

On the cellphone video, operators of a small fishing skiff frantically try to wave off an oncoming large vessel. No such luck; the oncoming vessel slashes into the skiff, the video pauses and then resumes with a view of the mangled small vessel.

“The operator of the big boat said he was texting, if you can believe that,” MacLeod said. “But if you look closely, you’ll see that no one on the skiff was wearing a PFD (personal flotation device) as required.”

While the allegedly texting skipper was guilty of dangerous operation of a vessel by not paying attention to where he was going, the skiff operators were not wearing safety equipment required by law.

Before moving on, MacLeod offered an apology for the extremely basic nature of the presentation.

“This lecture was set up for people who have no idea what a ‘bow’ is – ‘port’ or ‘starboard’ – anything like that. So I apologize to you seasoned mariners,” he noted.

The RCMP uses the Canadian Shipping Act code of offences, which are similar to those used in motor vehicle enforcement, MacLeod explained. So boaters may be charged with criminal negligence (“think: the guy who was texting”) or impaired operation of a motor vessel.

“I’ve only laid one charge of impaired operation. It started in Bamfield Harbour, and I chased him all through the Broken [Island] Group and all the way to Ucluelet – you know where the fish plant is?” said MacLeod.

There is also a set of collision regulations. Most come down to common sense, MacLeod said, adding that if you keep an appropriate lookout and proceed at a safe speed, you’re probably going to be okay.

For his presentation, Crawford had on display a wide variety of safety equipment required by small and commercial vessels, starting off with PFDs. Boaters are also required to carry a bailer, a fire extinguisher and a distress signal. For small vessels, an approved whistle like the popular Fox40 is sufficient. Commercial vessels require a pyrotechnic device, more commonly known as a flare gun.

The workshop also focused on vessel licensing and registration (not the same thing). Registration is required to have a name on your vessel, and really required if you have a mortgage on it. And there is a $185 fine if you don’t have a license for your vessel. Keep them both updated, by the way.

All operators of motorized vehicles (including Jet Skis) are required to carry a Proof of Competency certificate as well as the vessel license, or face separate fines of $288 each.

“That is universal – lakes and rivers,” Crawford said, adding, however, that in some narrow rivers, you may have some leeway.

It may surprise some that operating a vessel with a motor over 10 horsepower is illegal on the Somass River, although it is rarely enforced. That is a fairly standard regulation, and likely accounts for why outboard motor makers offer engines rated at 9.9 hp.

While it may also come as a surprise, it is legal to consume alcohol on a motor vessel, under certain very specific conditions.

If the vessel is “sel- contained, with no access to the public,” has permanent sleeping accommodation, cooking facilities and a toilet, alcohol may be consumed – as long as the vessel is moored. That led to a few light-hearted inquiries.

“So you can drink as long as the boat has a head?”

Well, no. Not quite.

“What if you just use a bucket for a toilet?”

No. It has to be an approved toilet that has holding and processing capability.

Participants each received a new Fox40 whistle for taking part in the session.

“You can even hear it if you blow it underwater,” MacLeod advised. The instructors conducted a second workshop for Hupacasath members later in the afternoon. 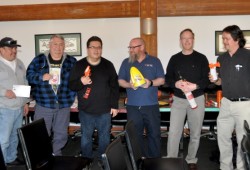 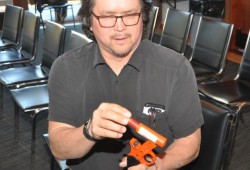