Maryna Macdonald, an 18-year-old from Port Alberni, led her B.C. girls team to a fourth-place finish at the National Aboriginal Hockey Championships this May. In the fall the blue liner heads to Massachusetts to study at Harvard University. (Submitted photo)

Despite posting an undefeated record in round-robin action, Maryna Macdonald and her British Columbia teammates came up a bit shy in their efforts to win a medal at this year’s National Aboriginal Hockey Championships (NAHC).

Macdonald, an 18-year-old member of the Ditidaht First Nation, was the only Nuu-chah-nulth player on the B.C. girls’ roster this season. The club registered a 3-0-1 record in its round-robin matches at the tournament, which was hosted by Nova Scotia’s Membertou First Nation. But the B.C. squad had its gold-medal aspirations quashed when it was downed 10-1 by Manitoba in its semi-final match.

Macdonald and her teammates still had an opportunity to return home with some hardware after that setback. But the B.C. side was edged 4-3 in overtime by Saskatchewan in the bronze-medal game of the tournament, which concluded Saturday, May 12.

Meanwhile, Cody Savey, a member of the Mowachaht/Muchalaht First Nation who was the lone Nuu-chah-nulth athlete on the B.C. boys’ team, did manage to capture a medal. He was part of the B.C. side that fought back from a 5-2 third-period deficit to defeat Saskatchewan 6-5 in overtime in its gold-medal outing.

For Macdonald, this marked the fourth straight year she had competed at the NAHC. Her B.C. squad won the bronze medal at the 2017 tournament, which was staged in her home province in the Cowichan Valley. Macdonald, who plays defence, was not that upset at missing out on a medal this time around.

“We tried our best,” she said. “And it was our third year in a row we had been in the bronze-medal game. Just to have that opportunity is great.”

As for this year’s event, Macdonald and her club kicked things off in convincing fashion, with an 8-0 triumph over New Brunswick in its opening game.

B.C. followed that up with a 4-3 victory against the Quebec-based squad called Eastern Door and the North.

B.C. then beat Team North, a team comprised of players from the country’s three territories, 5-3. And in its final game B.C. settled for a 2-2 tie versus Saskatchewan.

Despite its round-robin success, B.C. was no match for Manitoba, who went on to win the gold medal, in its semi-final matchup.

“We came out flat in that game,” Macdonald said. “We just didn’t show up. It’s hard to say why because we had good games leading up to that.”

Macdonald did score the lone B.C. goal in the semi-final match. Manitoba, however, lead 4-1 after the first period. Manitoba added a second-period goal and then scored five times in the final period.

Macdonald was one of six returnees on the B.C. roster. She believes the youthful squad was perhaps a tad overconfident heading into its semi-final because of its winning ways in the round-robin.

“I think it was a combination of being a young team and a bit inexperienced,” she said.

Manitoba ended up winning the gold medal after beating Ontario South 5-3 in its championship final.

Macdonald added she felt her squad was fatigued heading into its bronze-medal game.

“Everybody was drained,” she said. “It was a long week.”

But Macdonald was proud of the fact her squad put forth a valiant effort in the battle for bronze.

“We fought back from a deficit, from being down 3-1,” she said. “We clawed back and got the game into overtime.”

A total of 20 squads – 10 female and 10 male – participated at this year’s NAHC. The tournament features Bantam and Midget-aged players.

Macdonald, who is from Port Alberni, spent the 2017-18 season away from home, playing with the female prep team at Shawinigan Lake School. The private co-ed boarding school competes in the Canadian Sport School Hockey League.

Macdonald is now finishing up her Grade 12 studies. She will then continue her academic and athletic careers south of the border. In August she’s off to Massachusetts’ prestigious Harvard University. She’ll study engineering at the school and also suit up for the women’s hockey squad. 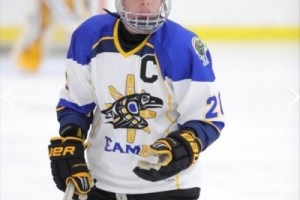