Activity grows on the Somass with community involvement in fishery

Tom Tatoosh demonstrates a circle setting technique on the Somass River in May. (Eric Plummer photos)

With a rising sun beaming on the Somass River, Tom Tatoosh is perched on his aluminum boat, steering the small vessel in a circle as a net is dropped. After the circle is made he collects the net from the river, quickly moving hands that carry 47 years of experience on the water.

The Hupacasath fisherman began his lifelong career at the Paper Mill Dam, a portion of the Somass River upstream from the location of his circle-setting demonstration that May morning.

“I was up at Paper Mill Dam being a chaser with my grandpa when I was six,” said Tatoosh, now 53. “He used to show me all of the tides and the currents when I was six and seven years old.”

Like other fishers from the Hupacasath and Tseshaht First Nations, Tatoosh is still watching the river closely, as levels can change by eight to 10 feet during the two tides that occur each day.

Activity on the Somass is increasing this spring with the sockeye salmon run, which normally peaks at the end of June. Sockeye fishing usually continues until the end of July, followed by chinook harvesting that begins in late August.

It’s a migration that attracts widespread involvement from the two First Nations. Tseshaht fisheries manager Andy Olsen said that approximately 100 members of the band financially subsist off of the fishery, with another 150 who supplement their main source of income by fishing. By the summer over half of the 1,200-member First Nation is involved in the fishery, including serving as deckhands or assisting with distribution for community fish days, said Olsen.

Tseshaht fishers sell most of their catch to riverside buyers like Nanaimo’s Hub city Fisheries and French Creek Seafoods from Parksville. If prices are lower more fishers will sell their catch along the road.

A regional benefit of the fishery is that most of the direct revenue stays in the Alberni Valley, noted Olsen.

“Eighty per cent of revenue stays in the city,” he said. “Everybody goes fishing so they can buy their kids new clothes.”

To encourage widespread community participation on a relatively equal level, the bands prohibit the use of mechanical machinery, besides the motors on their small aluminum boats. The bands also work closely with Fisheries Oceans Canada to help manage other fisheries that depend on the Alberni Inlet, which entails participating in weekly roundtable negotiations through the summer. Two to three times a week the Tseshaht survey the collection of sports fishing boats that can be found on the Inlet south of Port Alberni - which on a busy fishing day can number 300 - while the Hupacasath conduct fish counts of the sockeye and chinook migrations up the Somass to help inform the DFO’s escapement data.

Further down the Alberni Inlet, some commercial gillnet boats are already anchored, awaiting the opening of their fishery on June 12. Through the use of their comparatively advanced mechanics the gillnetters can bring in more fish faster than the smaller First Nations fishery, using 1,200-foot long nets that can stretch from the Inlet’s shore to its middle. When 150 of these boats are stationed in the area the staggered effect of the nets creates a gauntlet for the fish to pass through.

But despite the reliance on hand-driven work, the Tseshaht and Hupacasath fishery can bring in impressive catches.

“The biggest catch we set was 900 fish,” said Olsen of a three-member crew’s good fortune one day a few years ago. “They delivered their fish to the dock and made $25,000.”

On May 22 students from Port Alberni’s Eighth Avenue Learning Centre took a trip down the Inlet for a first-hand look at some of the opportunities on the water. Michelle Colyn is the capacity building coordinator for Uu-a-thluk, the Nuu-chah-nulth Tribal Council’s fisheries department.

“I’ve had the opportunity to visit the school, talk about marine-based jobs, fisheries-based jobs, what students might need to get involved,” she said. “This is a good complement to those presentations so we can be on the water and see the working environment, hang out with a few marine biologists for the day and fishers too.”

Opportunities on the water are continuing to grow for Tatoosh, who recently added to his collection of fishing boats by purchasing a 38-foot shrimping vessel.

“Shrimping is hopefully 10 months of the year,” he said, adding that despite the importance of traditional knowledge, a basic formal education is needed for a career in the fishing industry. “To have all of these positions you need Grade 12. You just can’t really get around it nowadays.” 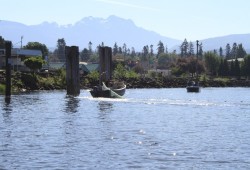 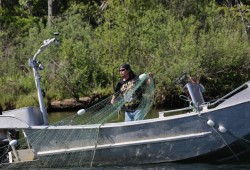 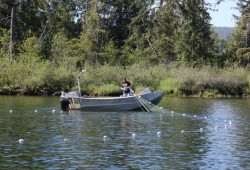