In a move to gather support for appealing a recent court ruling on the right of five Nuu-chah-nulth nations to harvest and sell fish from their territories, the Assembly of First Nations has passed a resolution to help the T’aaq-wiihaak case.

The AFN put the resolution forward by unanimous consent during its Annual General Meeting in Vancouver today (July 26), after the motion was originally moved to the agenda by Greg Louie, chief councillor of the Ahousaht First Nation. The motion concerns the AFN supporting the T’aaq-wiihaak fisheries – which means fishing with the permission of the Ha’wiih – by intervening in the appeal of a ruling from the BC Supreme Court in April. The Ahousaht et al. case involves the Ahousaht, Ehattesaht/Chinekintaht, Hesquiaht, Tla-o-qui-aht and Mowachaht/Muchalaht First Nations’ rights to harvest and sell fish from their territories.

The resolution cites passages from the United Nations Declaration on the Rights of Indigenous Peoples, including that “Indigenous peoples have the right to maintain their political, economic and social systems or institutions, to be secure in the enjoyment of their own means of subsistence and development, and to engage freely in all their traditional and other economic activities.”

In a landmark decision from 2009, the BC Supreme Court declared that the five Nuu-chah-nulth nations have the right to fish from their territory and sell in the commercial marketplace. But despite the Government of Canada’s commitment to follow the UN declaration, for years the five nations have been in stalled negotiations with Fisheries and Oceans Canada over how their fishing rights will materialize.

“It tells me that they’re not really being sincere in their dealings,” said Andrew Callicum, vice-president of the Nuu-chah-nulth Tribal Council, as he addressed the AFN at the meeting in Vancouver. “Here we are years later and it seems like we’re still fighting the same fight.”

In its justification ruling last April, B.C.’s highest court determined that in the past DFO policies have infringed on Nuu-chah-nulth fishing rights. But in clarifying the scope of the 2009 Ahousaht et al. judgement, the BC Supreme Court also defined the fishing rights as small-scale, “artisanal” operations limited to nine miles from the shore.

“This nine-mile restriction gives the plaintiffs access to the shore, inlets, and rivers in their territory, to the local shellfish, groundfish and rockfish, and to the migrating salmon and other fin fish that pass through their territory within nine miles of the shoreline,” stated Justice Mary Humphries in her judgement released on April 19.

During the Council of Ha’wiih Forum on Fisheries in June, Cliff Atleo, lead negotiator for Ahousaht, stressed the need to dispute the ruling.

“We have to appeal this decision in order to correct these errors in decision made by the judge,” he said, suggesting that Nuu-chah-nulth could approach other First Nations groups to take part in a court challenge. “It makes financial sense to have supporters come together; it’s critical and important that we engage in this appeal and push the government back.”

While she stood up to speak at the AFN meeting, NTC President Judith Sayers said the BC Supreme Court’s recent justification decision actually contradicts the 2009 ruling that determined the Nuu-chah-nulth fishing rights.

“We only have a right to a small, artisanal fishery, and that is not what the first trial said,” said Sayers.

The actual scope of the Nuu-chah-nulth fishing rights was further complicated by the presence of several intervenors in the April court decision, who argued that other stakeholders should have input regarding decisions over ocean resources on the west coast of Vancouver Island. These intervening stakeholders include the Pacific Prawn Fisherman’s Association and the BC Seafood Alliance.

The resolution passed by the AFN stated that the recent justification court decision “has significant implications for all First Nations,” and the motion was seconded by a representative from the other side of Canada, Chief Darcy Gray of the Listuguj Migmaq First Nation in Quebec.

Sayers said that the justification decision released in April will affect First Nations across Canada.

“They will be impacted by the definition of ‘local’, ‘artisanal’, and ‘small-scale’ boat fisheries,” she said. “People need to know that they have a chance to support Nuu-chah-nulth, because Canada’s always got their supporters and a lot of intervenors that support their arguments. We need to do the same, we need to show the court that there’s a lot of people that are very concerned about this ruling.”

The NTC president added that AFN support could help to draw the attention of the federal government to the Ahousaht et al. case.

“The Assembly of the First Nations, the national chief and the regional chiefs are all advocates - this is an advocacy organization - so they have greater access to the ministers and the prime minister, and they can advocate on Nuu-chah-nulth behalf,” she said.

The resolution directs the AFN Executive Committee to “seek resources in order to apply for intervenor status” in the appeal of the five Nuu-chah-nulth nations. 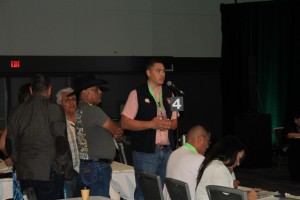 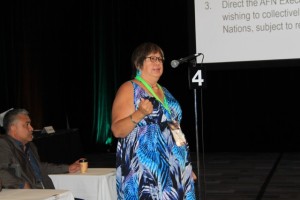 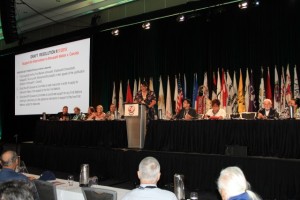