At the opening of the 2018 Tlu-piich Games Richard Watts, right, was inducted into the Nuu-chah-nulth Sports Hall of Fame for his lifetime in athletics. (Denise Titian photos)

The final game of the co-ed slo-pitch took place on Echo Field under smoky skies at Port Alberni on Sunday, Aug. 12.

There was plenty of excitement as teams Code Brew and High Times fought to win the sudden death final game. High Times pulled out the win with a final score of 10 – 7.

The ball game wrapped up six days of drug and alcohol-free family fun, games and entertainment. There were two days of track and field events followed by evenings of cultural entertainment, socializing and lahal. On Friday morning there were canoe races at Canal Beach.

During the opening ceremonies Tseshaht’s Richard ‘Dixie’ Watts was inducted into the Nuu-chah-nulth Sport Hall of Fame.

Watts took part in sporting activities from an early age including boxing at the Port Alberni Boxing Club at age 16. Coach Jimmy Hill recalled a time that Richard was on his way to Vancouver for a tournament and was one pound overweight for the division he was supposed to compete in.

“So Dixie started jogging on the ferry to lose weight before they arrived to weigh in later that day,” said Richard Samuel. “Dixie was able to lose the weight in time and had a winning record in that division.”

In addition to boxing, Richard Watts played floor hockey, ice hockey, fast pitch, basketball and roller hockey. The husband/father/grandfather remains active, going to the gym every day to work out.

Richard accepted his plaque with his proud family standing by his side.

The 2018 Tlu-piich games wrapped up on Sunday, Aug. 12 with acknowledgements to the many volunteers and donors that made the games a success. The evening wrapped up with awards going to the Slo-pitch tournament all-stars, the MVP, Larry Tom, the most sportsmanlike team and to the tournament winners, Code Brew. 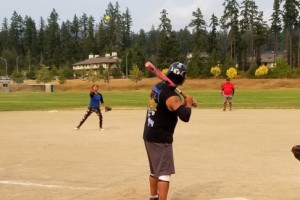 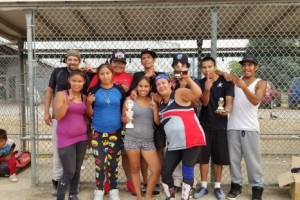 High Times won the Slo-pitch tournament on the final day of the games.