A wildfire started by lightning on Aug. 11 is spreading smoke through Zeballos. (Facebook photo)

With six properties in the Village of Zeballos under evacuation order, suppression efforts on the ground and in the air have intensified to fight the spread of the mountainside fire.

Since it was sparked by lightning on Aug. 11, residents in the small Vancouver Island community have watched the fire grow to 98 hectares, according the BC Wildfire Service’s latest estimate. After a week of growth the village ordered the evacuation of homes under the mountainside blaze on Aug. 18 due to the risk of falling debris.

Over the first few days of the fire crews were unable to find a way to work on the steep slope, but now 26 personnel from various agencies are on the mountainside fighting the spread of the fire, with three helicopters trying to suppress the blaze from above.

“A heavy helicopter has been bucketing along the power lines and a rappel team will be assessing the fire today to seek out opportunities to have an air tanker drop fire retardant along the power lines,” read an update from the BC Wildfire Service on Thursday. “The fire is in very steep ground with extremely difficult and unsafe access for firefighters. Our priority continues to focus on the safety of first responders and the public.”

The local government is emphasizing the protection of main powerlines to the community, with the installation of a “possible sprinkler system around hydro lines, though water supply might be an issue,” according to an update from the village.

The Village of Zeballos also noted that an excavator is by the north side of the fire, digging a fireguard line in an effort to stop its growth.

Meanwhile, north of Zeballos a much larger fire continues near the only road to the community. The BC Wildfire Service now estimates the Pinder Creek fire to be 220 hectares, starting 15.5 kilometres south of the turnoff from Highway 19. It is believed that this blaze was also started by lightning on Aug. 11, and it is considered to be 20 per cent contained. Twenty-one firefighters, three helicopters and three pieces of heavy equipment are on the scene.

“Crews continue to remove trees along the road to strengthen the control line in that area,” stated the wildfire service in its latest update. “Firefighters are working to establish guards and are working with fallers and BC Hydro to keep the road open and protect the power line. Helicopters will be used to support suppression along the Forest Service Road.”

As crews continue to fight the fire, the road to Zeballos will be closed periodically to allow personnel to fall trees near the vehicle route.

Now at an estimated 90 hectares in size, a forest fire continues to grow on the mountainside over Zeballos.

Due to the risk of falling debris, six properties under the fire were evacuated in Saturday with an order from the Village of Zeballos, affecting homes on the east side of Pandora Hill and north of the Sugarloaf Bridge.

“YOU MUST LEAVE THE AREA IMMEDIATELY,” read the order, which advised residents to gather family and anyone else who needs help. “Close all windows and doors. Shut off all gas and electrical appliances, other than refrigerators and freezers.”

After the mountainside fire was started by lightning on Aug. 11, the BC Wildfire Service was unable to send a crew to its steep slope and was limited to a helicopter for suppression. Now 16 firefighters and two helicopters are on the scene, including a provincial crew that has been fighting the blaze on the ground since Thursday, the Zeballos Volunteer Fire Department, the Port McNeill Volunteer Fire Department and a five-member structural protection crew from Comox.

“Crews continue to maintain and expand sprinkler systems to support structural protection, and patrol for any burning debris that may roll down the steep slopes into workable ground,” stated an update from the BC Wildfire Service. “This fire continues to burn up the slope, away from the community.”

“Your Zeballos Volunteer Fire Department has gone above and beyond, not only fighting the fire, but providing expert local knowledge to the fire crews and coordinating as required,” stated the Village of Zeballos in an announcement posted over the weekend. “Keep our fingers crossed that the fire stays in its present state and that the weather cooperates. A nice windless Zeballos rain storm wouldn’t hurt.”

With most of Vancouver Island in an “extreme” fire danger rating, according the BC Wildfire Service, the weather forecast for this week doesn’t show such a reprieve for the small northern village.

Another large wildfire is also growing north of Zeballos, threatening to spread to the only access road to the community. The Pinder Creek fire, which was also started by lightning on Aug. 11, is estimated to have grown to 200 hectares, starting 15.5 kilometres south of Highway 19. The fire is just 10 per cent contained, but growth is mostly uphill and away from the road to Zeballos, said the wildfire service. Currently on scene are 15 firefighters, three helicopters and two pieces of heavy equipment.

“We want to let the people using this road know that the road will be closed periodically for about 15 minutes as fallers are working beside the road, falling trees to help control this fire,” stated the BC Wildfire Service. “These temporary closures are expected to occur as required from August 17, for the next seven to 10 days.”

The Village of Zeballos has declared a state of local emergency, effective today at 1 p.m., as residents of the small Vancouver Island settlement watch a forest fire descend down a mountain over the community.

This entails an evacuation alert for the east side of the village, affecting several dozen people, advising them to be ready to relocate at a short notice.

The evacuation alert advises residents to locate family members and co-workers in preparation for emergency relocation. The village advises people to move their pets and livestock to a safe area, and gather essentials, such as “medications, eyeglasses, valuable papers (i.e. insurance), immediate care needs for dependants and, if you choose, keepsakes (photographs, ect.),” states the notice.

If you have to evacuate, take the routes specified by the local emergency officials, stresses the alert.

The state of emergency addresses some concerns expressed by Ernest Smith, a resident in the community who posted online a video of the fire, as seen from his home at 8:30 a.m. this morning.

Since lightning started the fire on the weekend, the steep slope has limited suppression efforts to helicopters. But today the BC Wildfire Service has managed to get a crew on the mountainside, according to a source form the Village of Zeballos office.

The BC Wildfire Service regularly updates the unfolding fire situation with this interactive map:

A rash of wildfires in the area around Zeballos has forced the cancellation of the Northern Region Games, as those in the community hope a blaze on the side of a cliff over the village won’t progress further down.

The games’ cancellation was announced early in the morning today (on Aug. 15) by the Nuu-chah-nulth sporting event’s coordinator Annie John, who was expecting as many as 200 visitors to converge in the community Aug. 17-19. Now Zeballos residents will spend the weekend watching  a fire on the side of the cliff overlooking the village, which has closed off one of the access roads out of the community.

So far the BC Wildfire Service has been limited to using a helicopter to control the fire.

“It’s in very, very steep terrain,” said Dorothy Jacobson, a fire information officer with the Coastal Fire Centre. “We are struggling with a way of getting crews on the ground. We’re working on that.”

The fire has spread smoke through the Village of Zeballos and the nearby Ehattesaht reserve. The Nuchatlaht First Nation also has an office in Zeballos, which was closed on Wednesday, Aug. 15 due to breathing concerns, according to a source from the band.

Less than 30 kilometres north of Zeballos a much larger fire burns by Pinder Creek, near the road to the community. Fifteen firefighters, three helicopters and two pieces of heavy equipment from the provincial wildfire service are currently working on the blaze.

“It’s 80 hectares in size, 10 per cent contained and burning in slash and heavy timber. It’s a very vigorous fire,” said Jacobson. “This fire is quite a ways away from the Village of Zeballos, but it is their access road, so if something happened they would be cut off. We’re working hard to make sure that doesn’t happen.”

These fires are among the 44 that have been burning on Vancouver Island in the region north of Highway 28 to Gold River since lighting began on the weekend, starting Aug. 11.

“They’re burning very remotely and we are prioritizing those that might affect people, property or infrastructure,” said Jacobson.

With 566 wildfires burning in B.C. and 29 evacuation orders affecting over 3,000 people, on Aug. 15 the provincial government declared a state of emergency. The province stated that this declaration gives government agencies “the authority to take every action necessary to fight the wildfires and protect people and communities.”

Last year the province declared a state of emergency on July 7, which lasted 10 weeks. This declaration had not previously been issued due to wildfires since the summer of 2003. 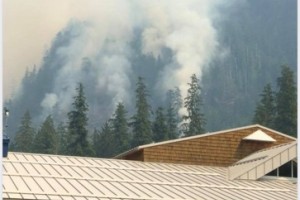 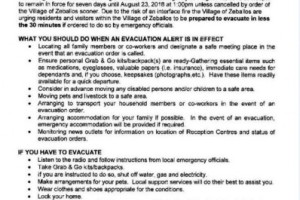