A fish fence, like the one in the Henderson River, is one of the methods members of the Nuu-chah-nulth Tribal Council's fisheries department utilize to count fish. (Jim Lane photo)

One aspect of Jim Lane’s job is often misunderstood.

“When you tell people you count fish they say ‘That must be easy,’” said Lane, who has worked as a biologist with the Nuu-chah-nulth Tribal Council’s fisheries department, called Uu-a-thluk, since 1995. “And actually it’s not easy.”

Uu-a-thluk’s office is located in Port Alberni, where Lane works out of. But the department also has regional offices in Tofino and Gold River.

Uu-a-thluk’s staff use various methods to count salmon, such as stream walking and snorkling, fish fences, sonar and tagging programs. Lane noted that the first thing needed is to determine which fish counting method best matches the management objective.

“Even if you have a ton of money to work with, you still have to figure out the best method to count fish,” Lane said.

If the information is required to manage a fishery, timely accurate counts are required. If the goal is to monitor trends of returning salmon to a stream, you do not need to know the exact number, so less expensive methods can be used to achieve the management objective.

Any method utilized, however, is not guaranteed to give an exact amount of fish. They all provide estimates, some methods are more precise than others.

Whenever numbers are compiled by Uu-a-thluk staff, that information gets passed along to federal officials, from Fisheries and Oceans Canada.

“That gets fed into their stock assessment database,” Lane said.

One of the simplest ways to count salmon is by walking, or snorkeling, a stream. Carrying a pencil and waterproof paper, the counters simply record every fish they see. This information becomes valuable when related to the number of fish that actually return to spawn. The stream is walked or swam with a snorkel several times within the period salmon are returning to spawn.

Since graduating from the University of Victoria in April 2017, Jared Dick has undertaken this method as a biologist with Ua-a-thluk.

“There’s a lot of debates currently going on about this,” he said of the fish counting technique, adding that it’s not uncommon to have four to six surveys of the same stream over the course of a few weeks.

Dick, a member of the Hupacasath First Nation, had also worked as an intern for Uu-a-thluk for four summers while he was a university student. He graduated from university with a Bachelor of Science, with a major in biology and a concentration in marine biology.

“It’s something that is so close to me and something our people are close to,” Dick said of his interest in fisheries.

Dick said there is an obvious need to count fish.

“As with any natural resource, you have to have a good idea of what your populations are,” he said.

Employing a tagging program to the area being counted is another method to assess the number of salmon returning to a stream. Roger Dunlop, who has worked for Nuu-chah-nulth’s fisheries since 1993 out of their Gold River office, has used this method. Over the years Dunlop has authored a number of papers on how to apply tags to returning fish to get accurate and precise estimates of abundance.

A method utilized in recent years to count fish involves sonar technology. A sonar camera, provided by federal officials, is set up so the sonar beam covers the width of the stream channel. If a salmon swims through the beam, its image is recorded. Recorded imagery is then examined to count the number of fish. But due to obstacles in the water a sonar isn’t always a reliable means for useful numbers, cautioned Dick.

And yet another approach to counting fish is using fish fences. As they pass through a fence fish are enumerated by automatic counters. Fences being used annually to count fish include those on the Hobiton and Henderson rivers.

Regardless of the method employed, fish counting is never a simple process for biologists.

“In the end there’s a lot of work to be done,” said Dunlop. 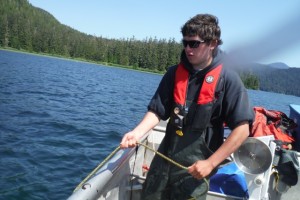 After serving as a summer intern during his university years, Jared Dick is now a full-time biologist with the Nuu-chah-nulth Tribal Council's fisheries department. (Photo supplied by Jared Dick)