Government-imposed measures to protect killer whales on both sides of the border have intensified this year, with two additional critical habitat areas designated on the West Coast. (NOAA/Wikimedia Commons photo)

Fisheries in Nuu-chah-nulth territory could face further restrictions this year as the DFO tightens its measures to protect the habitat of endangered killer whales off the west coast of Vancouver Island.

On Dec. 19 Jonathan Wilkinson, minister of Fisheries, Oceans and the Canadian Coast Guard, announced 6,419 additional square kilometres of critical habitat protection for northern and southern resident killer whales on B.C.’s coast. This more than doubles the existing critical habitat the DFO previously pledged to protect in 2009, with new “highly productive” salmon areas north of Haida Gwaii and west of Barkley Sound, according to an announcement from the federal department in December.

The measures were introduced to promote the recovery of the southern and northern resident killer whales, which are respectively listed as “endangered” and “threatened” under Canada’s Species at Risk Act. Both species commonly feed on chinook salmon, bringing the possibility that the protection of their critical habitat could include further restrictions to fisheries in the region this year.

“Under a Critical Habitat Order, the destruction of critical habitat is prohibited,” stated the DFO in an email to the Ha-Shilth-Sa. “This does not immediately result in fishery closures. However, this is an important foraging area.”

“They could bring a wide range of changes, some of which will directly affect fisheries,” said Eric Angel, program manager for Uu-a-thluk, the Nuu-chah-nulth Tribal Council’s fisheries department. “I think it’s reasonable to be concerned that the department is going to put a heavy emphasis on reducing chinook harvests further in these newly designated areas as one of their preferred approaches.”

Now a total of 10,714 square kilometres on B.C.’s coast are designed as critical habitat for killer whales, including an offshore area that covers a considerable portion of Nuu-chah-nulth waters south of Clayoquot Sound. While fisheries restrictions will inevitably affect coastal Nuu-chah-nulth communities, it remains to be seen how this will be managed as the Critical Habitat Order is enforced.

Angel cautioned that severe restrictions from the DFO on chinook harvests could push more fishing vessels north to Clayoquot Sound and Nootka Sound.

“They bring these measures in, they could have an absolutely devastating effect on the communities that depend very heavily on fisheries at an important time of year for their economies,” he said. “The First Nations and the communities on the west coast of the Island more generally, they have a lot at stake here.”

“Should fisheries reduction measures be needed, all efforts will be made to minimize the economic impact of any reductions on coastal communities, and to work with implicated sectors to ensure their activities do not result in critical habitat destruction,” wrote the DFO. “Any fisheries management measures under the Fisheries Act related to chinook access that might be proposed would be considered in consultation with stakeholders for the 2019 season.”

With as few as 74 southern resident and 306 northern resident killer whales left, the protection of the species has received growing attention from government authorities on both sides of the border. The State of Washington recently announced $1.1 billion in spending to promote the whales’ recovery, including a whale watching ban in some areas.

“We are undertaking a herculean effort to save these iconic creatures,” stated Washington Governor Jay Inslee.

“The Government of Canada is moving quickly to protect southern and northern resident killer whales and to help the population recover,” pledged Minister Wilkinson in his December announcement. “These new critical habitat areas will ensure that the ocean space the whales frequent and forage for prey is protected for generations to come.”

Angel isn’t convinced that the Critical Habitat Order will help the long and complex lives of the killer whales. He sits on a technical working group tasked with advising the DFO on how to protect the species.

“We don’t have a clear sense of how any of these measures are going to improve the situation for the killer whale population,” said Angel, who hopes to see more engagement with coastal communities. “There’s no mechanism right now for working with local stakeholders, communities and First Nations to figure out what might work in those specific areas.”

The DFO identifies three key threats to the survival of the killer whales. These include reduced prey due to declines in salmon stocks on the West Coast, acoustic and physical disturbances in their habitat - particularly from the passage of vessels - as well as environmental contaminants. Ninety per cent of encounters with southern residents have occurred off the west coast of Vancouver Island, according to a report on killer whales released in the fall, with these sightings being most frequent from June to September. 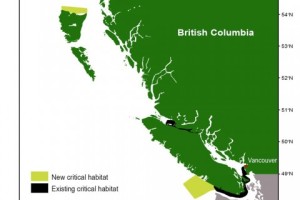 Fisheries and Oceans Canada has more that doubled the critical habitat for killer whales, including a new area off the west coast of Vancouver Island. (DFO map)