The language nest program at the Port Alberni Friendship Center Daycare is one of the many programs demonstrating success in passing the Nuu-chah-nulth language on to young people. Tuupat and her sister ciisma (Patti Frank) have been working in the daycare language nest, Tuupat since the beginning, and ciisma for the past 18 months.

A group of toddlers sing nursery songs converted to the Nuu-chah-nulth language as elders ciisma and Tuupat drum and guide the song. Some children are distracted, wriggling away from the circle, wanting to play.

Just when it starts to look like a losing battle to keep the children engaged, the elder sisters begin saying a Nuu-chah-nulth prayer. A boy stops what he is doing and focuses his full attention on them, proudly reciting the words to the prayer, loud and clear. Soon, the other children join in.

Tuupat (Julia Lucas) says that they have been working with the boy since he was a baby and now he is becoming bilingual.

“It is important to start teaching them (language) while they are still babies,” Tuupat advised. Otherwise, proper pronunciation becomes a problem, which is the case when English is the first language.

The ancestral language is at risk of extinction with an estimated one percent of the Nuu-chah-nulth population identifying as fluent speakers, according to Victoria Wells of the Quuquatsa Language Society. For that reason great efforts are being made to preserve and teach the language to non-fluent speakers.

The language nest program at the Port Alberni Friendship Center Daycare is one of the many programs demonstrating success in passing the language on to young people.

Tuupat and her sister ciisma (Patti Frank) have been working in the daycare language nest, Tuupat since the beginning, and c^iisma for the past 18 months.

Port Alberni Friendship Center’s Treasuring Our Young Ones Daycare has been in operation for two years. It is decorated with First Nations-inspired artwork and furnishings and it has a unique language nest program that is helping shape a new generation of fluent Nuu-chah-nulth speakers.

In the classroom setting there are about half a dozen preschoolers, both boys and girls, full of energy and eager to learn.

Sisters ciisma (pronounced Chees-ma) and Tuupat are seated in comfortable chairs set aside for elders; ciisma holds a drum, always ready to guide the singing. There are four other adults, some First Nations, some not, assisting with the care of the children and each speaks to the little ones in Nuu-chah-nulth phrases mixed with English.

They tell the children when it is time to sit down, help clean up, wash their hands or have a snack, in the Nuu-chah-nulth language. The children respond, sometimes repeating the phrases back to the adults.

Tuupat and her sister grew up in traditional Nuu-chah-nulth style with their family in Ahousaht. They had a big house that contained several generations of extended family members. It was a house where everyone spoke the Ahousaht dialect of Nuu-chah-nulth.

“We lived in a big house with Imscha (their father, Joe Titian) and other elders that were in their 80s,” ciisma recalled. “We lived there with our parents and grandparents and we had no TV or phones.”

One of the elders living there was Robert Joseph, who was the father-in-law of ciisma’s brother. They remembered that he wore dark glasses because he was blind. The elderly man would sit on a stool near the door and call the children for himwitsa (stories).

“We would all sit on the floor at his feet and he would ask us in the Nuu-chah-nulth language if we were listening before he started telling a story – he was blind so he couldn’t see if we were ready to hear him,” said Tuupat.

The elder would tell stories, some of them long ones and each had a moral or life lesson for the children.

Tuupat then told one of the stories she heard in her childhood in English. She talked about a grandmother busy weaving baskets while her grandson played nearby. Unable to leave her work the woman asked her grandson for water.

But the boy didn’t want to get the water and continued playing. The grandmother pleaded with the boy to get her water and told him that her throat is so dry that she is starting to sound like a blue jay.

Still, the boy wouldn’t listen. Then he heard the sound of flapping wings and looked up to see a blue jay flying around the house and his grandmother was gone.

“Oh no, who is going to look after me? I can’t be by myself,” thought the boy. He ran to get water and chased the blue jay around trying to give it water but it flew out of the house and away. The boy never saw it or his grandmother again.

“The lesson is when someone asks you to do something, do it, because you might never get another chance,” said Tuupat.

She went on to say that much of the richness of the story and deeper meaning is lost when translating to English.

“You see, this is what your generation missed, not having Nuu-chah-nulth as your first language,” said Tuupat to Ha-Shilth-Sa.

The sisters recalled a family gathering after the loss of their niece, who was a fluent speaker.

“There were eleven of us there that can still speak the language and it was so nice,” said ciisma.

But she wound up with tears in her eyes at the realization that the number of fluent speakers in her family will continue to dwindle.

She told Ha-Shilth-Sa that her father refused to allow her to go to residential school and she was sad about it.

“I wanted my education so bad,” ciisma recalled.

And when the other kids came back from residential school they were speaking English.

“I became ashamed that I could still speak my language,” she said.

But decades later ciisma says this knowledge has become her greatest asset. Nudging her sister, ciisma said they never thought they would see the day when knowing the Nuu-chah-nulth language would become a valuable thing.

Now, the sisters take part in several language preservation programs and they are happy to see exciting progress with their daycare students.

They have adapted English language nursery rhymes like Twinkle, Twinkle Little Star, Old MacDonald Had a Farm and many others for the young ones to sing in Nuu-chah-nulth, and the children love it. They sing number songs and squeal with delight when they sing a song that includes their names.

The children are learning to speak the language and Tuupat said one parent removed her child from the program because her child had learned so much Nuu-chah-nulth that she was having trouble understanding her child.

The sisters are concerned about gaps in the learning cycle. When their daycare class is old enough for kindergarten, they may not have a language class there to build on what they know.

“My dream is to start teaching the babies, like us – how we learned,” said Tuupat.

She went on to say that her dream would include opportunities to continue learning the language for young people from infancy up to the time that they can teach their own babies.

“I like coming here every day to see the success – it is so enjoyable,” said ciisma. 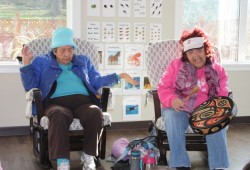 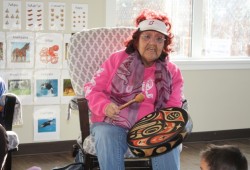