A fresh cut block along the coast of Vancouver Island. (Mike Youds photo)

An ambitious Nuu-chah-nulth plan to restore salmon ecosystems in watersheds surrounding Nootka Sound is closer to being realized with funding that allows research to get underway.

Nootka Sound Watershed Society, which includes the nations of Mowachaht/Muchalaht, Ehattesaht/Chinehkint and Nuchatlaht, has received $904,000 from the federal Coastal Restoration Fund. The money enables riparian studies to proceed this summer on chinook salmon watersheds heavily damaged by more than 60 years of logging on the north Island.

Roger Dunlop, Uu-a-thluk northern region biologist and lead biologist on the project, said the research should bolster another, more ambitious proposal he’s been working on for several years: “salmon parks.”

“It is separate from but complimentary to salmon parks,” Dunlop explained while sharing news of the successful research grant application.

Both the funded research and the proposed salmon parks are based on a concept that reflects the Nuu-chah-nulth principle of hishukish tsa’walk — everything is interconnected. The idea is to protect not only stream channels and riparian habitats that border them, but also expansive areas of old-growth forest habitat surrounding salmon streams, recognizing the complex ecological interrelationships within the entire coastal forest ecosystem.

Dunlop feels the province’s existing regulations around freshwater fish habitat are ineffective with no measures to ensure sediments churned up by logging and road construction are contained.

“This has caused considerable morphological changes in all our stream channels,” he explained.

Since industrial-scale logging began on the west coast in the 1950s, chinook populations have steadily declined. The province relies heavily on stumpage revenue from logging and hasn’t adequately regulated the industry to protect fish habitat as a result, Dunlop said. With the exception of Clayoquot Sound, there are no proper safeguards to protect watersheds. Federal fisheries habitat protection has been similarly lacking, he said.

“The forest industry probably still has a stranglehold on the whole province,” he said. “I’ve been talking about this for a few years, and everywhere I went everybody thought it was a good idea.”

Dunlop said the concept of salmon parks, officially referred to as “salmon forest conservation areas,” first occurred to him after a conversation with Nuchatlaht Chief Walter Michael. Michael was trying to protect his sockeye stream — Nuchatlaht Tyee are one of the few peoples in the province who can own a salmon stream — from logging by Western Forest Products. The chief consulted his grandfather’s book, which noted the stream was not to be fished in consideration of its sensitivity.

“Why not just say no to logging,” they asked themselves, and began mapping nearby streams to fully consider connectivity within the watershed. Dunlop went on to develop the idea of parks as networks for protecting whole ecosystems in which silviculture would work in close co-ordination with habitat restoration.

“That’s kind of how it evolved, and all the communities liked it. It got unanimous support,” he added.

Keen support for the park proposal has poured in from communities in the region, including Tahsis, Gold River and Zeballos, as well as from resort operator Nootka Marine Adventures, the Sierra Club of B.C. and Nuu-chah-nulth Tribal Council. Nootka Marine Adventures has pledged $50,000 to the project while the Sierra Club has offered $50,000 a year of in-kind support annually over four years.

“They liked the idea and want to invest in the future of these fish,” Dunlop said.

Each of the nations involved is contributing in-kind support as well. They back the park plan while acknowledging that it would restrict logging and therefore affect jobs and revenue, Dunlop noted.

To establish the parks, Nuu-chah-nulth Tribal Council has applied for $2.7 million in funding from the Target 1 Challenge of the Canada Nature Fund, overseen by Environment and Climate Change Canada. A battery of supporting letters back the application.

“These three nations are part of the NTC and are leading the way with this innovative idea,” wrote NTC President Judith Sayers. “The other NTC nations are excited about this and are also looking into how they can become involved in salmon parks in their own territories.”

Ha’wiih, the hereditary chiefs of Nuu-chah-nulth, have suggested that the B.C. government consider the salmon park concept for broader application to protect salmon streams provincewide. They point to a glaring weakness in the province’s Forest and Range Practices Act, enacted in 2004. The act ranks timber supply as a priority above all else, stating: “Without unduly reducing the supply of timber from British Columbia's forests, to conserve, at the landscape level, the water quality, fish habitat, wildlife habitat and biodiversity associated with those riparian areas.”

“Nothing is more important than restoring the health of our Ha-houlthee including the forests and the streams they nurture,” Michael wrote in his support letter on behalf of Nuchatlaht.

“The feeling I get from the nations is that we’re going to do this regardless of whether there is funding or not,” Dunlop said, cautioning that it won’t be achieved in the short term. While the ancient forest was disturbed every 600 years or so, forest practices now allow only 60, he noted.

“It’s going to take time for the trees to grow back. We’re looking at a time scale of 1,000 years,” Dunlop said. 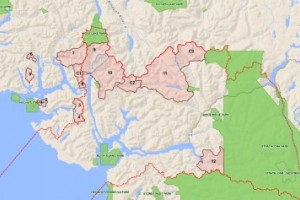