A forum to collaboratively define Nuu-chah-nulth relations with Canada began with elders standing up to proclaim the importance of unity.

Harry Lucas, a Hupacasath member who grew up during the ‘40s and ‘50 in Vancouver Island west coast communities like Zeballos, Hesquiaht Harbour and Hot Springs Cove, stressed the need for people from B.C.’s 14 Nuu-chah-nulth nations to work together.

“Let’s be one; let’s let the differences aside and work as a nation where we need to be united,” he said. “We’re one people, we’re all relatives, all the way down to the states.”

On the first of the two-day Reconciliation Community Gathering/Discussion in Maht Mahs, Lucas noted that he doesn’t see Nuu-chah-nulth-aht united like they were in the ‘70s, ‘80s and 1990s.

“I don’t see that anymore,” he observed. “This place used to be full of people wanting to listen to what’s happening, and we need to recover that. We need to work together as one people, one nation. Being separate doesn’t seem to help.”

Anne Robinson stood up to emphasize a return to “core values” that were gained from elders.

“Our responsibility to care for all things on this earth was something we agreed to generations back when the humans and all things first came to the earth,” she said. “Those are the things that we can reach for, bring back into our families and into our communities as a way to pull back together as one people with one voice again - because we are so far from that. I’ve seen it in my lifetime.”

Held by the NTC on Tseshaht territory May 9-10, the forum is collecting input from Nuu-chah-nulth members to define the collective’s messaging to Ottawa. Plans are that this will be compiled into a document to be adopted at the NTC’s annual general meeting in September, the month before Canada’s federal election.

Under the Liberals, the last term in Ottawa has included a declaration from Prime Minister Justin Trudeau that no other relationship is more important to Canada than the one with its Indigenous peoples. One Indigenous affairs department has been separated into Indigenous Services Canada and Crown-Indigenous Relations, and this year’s federal budget included an announcement that all treaty loans would be forgiven or repaid to First Nations.

But many feel Canada’s relations with its Aboriginal peoples has not improved. More than half of the country’s children in foster care are Indigenous, with rates significantly higher in western provinces. And a decade after the Supreme Court of Canada ruled on the right of five Nuu-chah-nulth nations to catch and sell fish from their territories, the scope of this right is still caught up in an appeal.

“It’s to someone else’s benefit that we are dividing, it’s that political structure across this land,” said Robinson. “Think back to what was shown to you.”

Nuchatlaht Councillor Archie Little said that the provincial government and Fisheries and Oceans Canada need to see that First Nations are the best leaders in sustainably using resources.

“Good solid management is not always based on money,” he said.

Lucas expressed his frustration on the water.

“When I go fishing in my territory I’m told I can’t fish there, meanwhile there’s about 40-50 sport fishing boats fishing in the same area where I’m not allowed,” he said, adding that he also sees the mismanagement of forests each day. “I live on Sproat Road and I count 250 logging trucks go through there every day.”

As Nuu-chah-nulth work to define what reconciliation will mean in the future, Ehattesaht member Dawn Smith cautioned that the process is far from simple. She assists Camosun College to “Indigenize” its curriculum, and completed doctoral studies at the University of British Columbia on how to humanise post-secondary institutions by incorporating traditional First Nations values.

She’s also studied how various forms of reconciliation with Indigenous peoples in other countries have led to “disappointment” and “essentially really no movement and no education.”

“We’re looking at a process that is substituting now the treaty process. We’re extinguishing our rights in a different way,” she said. “The quality of our lives hasn’t improved with all of these things they’ve thrown at us.”

Topics up for discussion at the reconciliation forum also include lands and resources, climate and environment, Nuu-chah-nulth well-being as well as the next steps to better define the NTC’s message to the federal government. 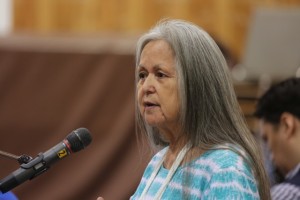 Anne Robinson spoke about core values at the event. 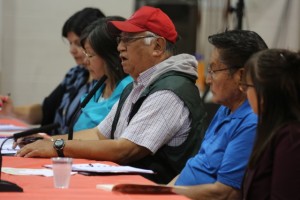 Archie Little speaks during the round table discussion to begin the forum. 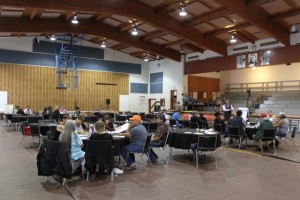 For much of the forum participants separated into smaller discussion groups.