Aaron Watts of Tseshaht leads the song 'We are Strong' with help from students and teachers during the SD70 First Nations Spring Festival on May 16 at the Alberni District Secondary School. (Karly Blats photo)

Students from schools all across SD70 packed the Alberni District Secondary School to show off what they’ve been learning about First Nations culture, teachings and history. Some schools presented performances of song and dance in the ADSS theatre while others displayed Indigenous-themed artwork in the foyer. Those in attendance also had the opportunity to play a game of lahal.

This year’s festival theme was Always Remember Your Roots.

To open the performances, Aaron Watts of Tseshaht led the song We Are Strong with help from students and teachers. Watts gifted the song to SD70 and said it’s a song of celebration.

“Spring fest is sort of a larger version of what we see in schools…and that is a celebration of Nuu-chah-nulth language and culture,” said David Maher, SD70 principal of Aboriginal Education.

Maher said for the past two years, SD70 has worked with the province and under the guidance of an Aboriginal Education Advisory Council to put an Indigenous lens into the teaching and learning practices within all classrooms.

“When we put an Indigenous lens throughout classrooms, we’re doing things such as working with the traditional game of lahal when we learn the concept of probability. Or we’re looking at concepts of oral storytelling within our humanities and particularly within our English classrooms,” Maher said

Maher said 30 per cent of SD70 students are Indigenous with the vast majority being Nuu-chah-nulth. He said although students will learn about a variety of First Nations, there is a large focus on Nuu-chah-nulth language, culture, history and traditions.

Having an integrated Indigenous lens in public school teachings is important, Maher said, to help students feel a sense of positive personal identity and cultural identity.

Maher said SD70 is working with NTC partners to create opportunities for Nuu-chah-nulth language learning throughout all grades.

“We’re just scratching the surface of that and we mainly focus on Grade 8, 9 and 10, but we’re looking into, within the next 18 months, creating a K to Grade 7 language strategy,” he said. “Ultimately we’d love to have the K to 12 language strategy that supports the work that families and communities are doing in developing and revitalizing the Nuu-chah-nulth language.”

Richard Samuel, Nuu-chah-nulth education worker, said the spring festival is a great way to show what the students have learned over the school year.

“This has been an on-going spring festival for a number of years,” Samuel said. “It’s very important to showcase to the entire Port Alberni community what the students are learning on Indigenous culture and showing it’s helping the Indigenous students in the schools to figure out their identity and figure out who they are and be proud of where they come from.” 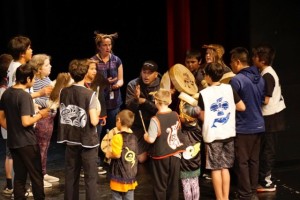 Bamfield Community School students perform a song during the SD70 First Nations Spring Festival on May 16 in the ADSS theatre. 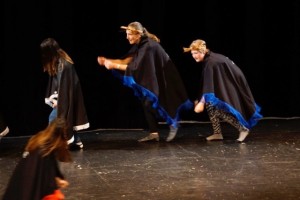 Bamfield Community School students perform a song and dance during the SD70 First Nations Spring Festival on May 16 in the ADSS theatre.