A group from the Pacheedaht First Nation paddles a canoe on the Gordon River, moments after the vessel was blessed in a traditional ceremony on June 8. (Denise Titian photos)

A pair of donated canoes, gifts from the University of Victoria to Pacheedaht First Nation, were brushed in a traditional cleansing ceremony lead by cultural teachers from Ditidaht on June 8.

“Pacheedaht, Ditidaht and Makah – we all speak the same dialect because we were one,” said Ditidaht elder Jimmy Chester. He told the story of the broken sacred rattle that split the three sister nations.

“We come from Tatoosh Island (off the coast of Cape Flattery in Washington State); after the sacred rattle broke they were afraid they would get killed so they paddled across the strait,” Chester shared.

They landed in Jordan River but there wasn’t enough food so some of the group paddled up island, settling at area that is now Ditidaht territory.

Pacheedaht people are working hard to revive their culture, because, as Arliss Jones says, “we no longer have the culture.”

A group from Ditidaht travels to Port Renfrew every Tuesday to hold language classes that are well attended by eager Pacheedaht learners. Ditidaht singers, language and culture holders Bobby Durocher, Cyril Edgar, Christine Edgar, Sarah Tom and Jimmy Chester all help to pass the teachings on.

In addition, family from T’Souke Nation are working with PFN to further revive the culture by training youth for the upcoming canoe journey to Lummi, Washington.

Sarah Wright Cardinal, an assistant professor in the School of Child and Youth Care at UVic. Her husband, Jeff Welch, has blood ties to Pacheedaht and wanted to help them help their youth to take part in Canoe Journeys as a way to promote wellness and culture.

“My husband Jeff Welch is a cultural educator from T’Sou-ke Nation with family ties to Pacheedaht through his granny Ida (Jones),” she shared, adding that her family lives in the village of Siaosun (T’Sou-ke) where we are raising our children.

The Cree educator from northern Treaty 8 territory embarked on a project with Roxy Jones, director of the Pacheedaht Health Centre and alumni of UVic, to bring resources to the community that would help the youth take part in the canoe journeys for the first time in more than 20 years.

“We saw the potential for the community and we secured a Social Sciences and Humanities Research Council - Indigenous Research Capacity and Reconciliation grant; with this funding we are hosting workshops in preparation for the Paddle to Lummi 2019,” said Cardinal.

Every Tuesday a delegation travels to Port Renfrew to teach community members the art of drum-making, paddle-making, cedar harvesting and weaving. Thor Gauti of T’Sou-ke also makes the trip to teach canoe safety and paddle practice. The fund covered the purchase of a 36-foot fibreglass canoe designed in the Nuu-chah-nulth style.

“Jeff and his cousin Thor Gauti, a T’Sou-ke Nation cultural educator who has skippered on Tribal Journeys for many years, wanted to share teachings and prepare for Tribal Journeys with Pacheedaht family who have not been on journeys for some years,” Cardinal told Ha-Shilth-Sa.

And so it came to be that neighboring nations, both family, united in Pacheedaht territory in cultural immersion.

Led by elder Jimmy Chester, Ditidaht singers held the brushing ceremony for the new canoes, which were set up on trailers on the road next to the river. The Ditidaht men first performed a prayer chant, which they explained comes from Pacheedaht.

With the brushing ceremony done, the people carried the canoe down to the river – thrilled to take part in the first paddle in their river.

“Pacheedaht First Nation is thankful for the generous gift of a pair of canoes which will allow the youth to partake in 2019 canoe journeys for the first time in 20 years,” said elected chief Jeff Jones.

Chester led the singing of a few more songs, each time explaining the origin of the song.

With the crowd gathered around Chester blurted out the word ‘lekawasin’, asking the people if they knew what that meant. “It means sea elephant,” he told the crowd.

“Before Pacheedaht and Makah used to eat that,” he said adding, “There, now you learned something new from me today.”

When asked how he knew so much of the culture, Chester responded that his parents both died while he was a child and so he was raised by his grandparents. “Me and my late brother Ernie learned so much from them…my granny, Mary Peters, was from here,” he said, meaning Pacheedaht.

Chester explained that one of the songs he sang that day came from his mother’s side of the family and went to Ditidaht when she married his Ditidaht grandfather. He also sang a song that he said Pacheedaht elder, late Ada Jack, used to use.

“The canoe ceremony is a celebration of the community working together, moving together on this healing journey,” she added. 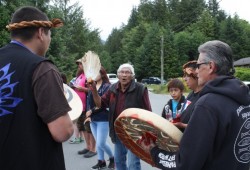 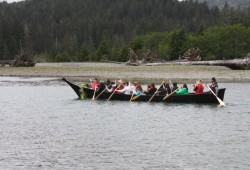 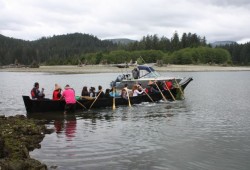 Other Stories in
Overdose crisis, Culture

‘The homeland of our ancestors since the beginning of time’: Film presents Yuquot to a wider audience