WorkSafeBC has introduced new regulations aimed at improving safety conditions for workers on board commercial fishing vessels. Every person on board is now required to wear a life jacket or PFD (personal floatation device) while on deck. The regulation went into effect last month, on June 3, and applies to all commercial vessels, regardless of size.

The change was not unexpected by commercial fishers, said Patrick Olsen, manager of Prevention Field Services at WorkSafeBC, in a phone interview on June 25. But overall, he says, the regulations have been well-received. Crewmembers have been pulled into the water while managing lines, setting gear, and in other situations. The use of a life jacket reduces the risk of drowning, stated Olsen.

WorkSafeBC’s regulations are informed by new recommendations for safety onboard commercial fishing vessels that were made following the September 2015 capsizing of the Caledonian near Tofino. Three crewmembers drowned in the incident; only the crewmember wearing a PFD survived the tragedy.

George Chester John Sr., a seasoned Ahousaht commercial fisherman known to friends and family as Chester, supports the new regulations. He is the skipper of the Flora Queen, a 36-foot wooden troller based in Tofino, and has been fishing for 64 years.

“I’ve done longlining, seining, gill netting, trolling,” John said in an interview at his Port Alberni home. “When I started, I was only about 10 or 11.”

When John heard about the regulation, he phoned around to five or six fellow fishermen, to see what they thought about it.

“Everyone agreed,” John said, “They want to have their life jackets. Keep them safe. Because they’re responsible for their crew.”

“They might blame me, eh,” John continued, speaking of his responsibility as skipper on the Flora Queen. “If [the deckhand] falls overboard or like if I’m napping, tell him to take the wheel for a while, he might go outside . . . accidently [fall overboard].”

John is waiting for the next opening, when he will go out for spring salmon. Part of his willingness to comply with the new regulations is motivated by a desire to avoid penalties.

“One guy was saying ‘I don’t have to wear it,’ to me yesterday,” he said. “But I said no, I think we gotta have it, otherwise we’ll be in trouble. They might tie us up [restrain the vessel at the dock, preventing them from fishing].”

But he does understand and support the safety reasons behind the regulation. He has been in situations himself that led him to put on a life jacket, at a time when regulations were not as prescribed.

“I’ve seen a lot of storms,” said John. “Once going to Ahousaht, I sort of got scared...There was another boat behind me not too far, used to disappear by the big groundswell, some of it was breaking. So I put a life jacket on. I was by myself. Just in case something happened. I think you gotta have it, anyways.”

Any flotation device approved by Transport Canada is acceptable and will follow regulation. Miller describes a new hybrid type of PFD, which is inflatable but also inherently buoyant. It’s not nearly as bulky, and could be a good solution for those working on fishing vessels, as it won’t inhibit movement. Similar to the enforcement of seatbelt use in vehicles, Miller hopes that everyone gets used to the idea, and that it becomes commonplace.

“The new regulation will help [improve safety] a lot,” stated Miller. “There may be some resistance initially, but if you look at the number of tragedies, it’s well worth it having everyone wear a life jacket.” 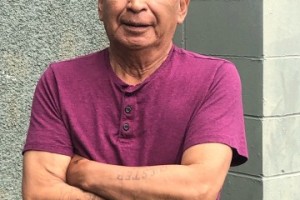