First Nations along the vast migratory path of Fraser River salmon are optimistic that a new co-management agreement with Canada will help ensure a future for their fisheries.

As countless Fraser salmon bound for Interior spawning grounds remain blocked by a rock slide in the river — a potential disaster in the making first observed in late June — 76 nations glimpsed a “ray of hope” last week.

“It’s a milestone,” said Cliff Atleo, who represented the three hereditary Ahousaht chiefs at the negotiating table. “When has DFO agreed to co-manage with anybody? It’s historic.”

The signing took place July 5 at Katzie Health and Community Centre in the lower Fraser Valley after years of work uniting the signatory nations and engaging in nation-to-nation negotiations with Canada.

Darren Haskell of Tl’azt’en First Nation, president of the FSMC, put the achievement in perspective.

“Today marks a historic nation-to-nation moment between Indigenous peoples and Canada,” he said. “We have long fought for our rightful place at the table in the management of the fisheries resources that are critical to our communities’ well-being.”

Atleo was serving as NTC president when the idea originated to unite First Nations along the migratory path of Fraser River salmon in a common quest for co-management. He described the agreement as a ray of hope amid bleak circumstances for wild salmon in B.C. waters. More than the promise of a seat at the table, co-management is viewed as a means of overcoming longstanding distrust and deep-seated frustration with fishery management decisions.

“The idea of putting the nations together started about 10 years ago,” based on recognition of the river’s unique status as a vital resource to so many nations, Atleo said. “As it was, I think we had over 70 signatories and a very strong presence of all nations.”

Co-management workshops with the First Nations Fisheries Council started laying the groundwork in 2010. Consensus approval from the many FMSC member nations was achieved in 2015, allowing talks to open with DFO on collaborative decision-making in management of the common resource.

“Not only does this renewed collaboration help secure the sustainability of our fisheries for the long-term, it ensures that moving forward, decisions made are based on shared principles for the protection and conservation of Fraser salmon stocks,” Wilkinson said.

Atleo firmly believes that having a voice at the fisheries management table offers greater assurances there will be Fraser River salmon for future generations. He feels management decisions have not been made with the knowledge, perspective and sense of urgency warranted by the state of wild salmon stocks.

Will their voices be heard? Will they be heeded?

“That’s always the hope,” Atleo said. “We’re never going to give up. We always said to DFO, ‘We need your help.’”

He cited the Fraser rock slide as a case in point, suggesting governments had not responded with appropriate urgency from the outset. First Nations representatives were able to convey their concerns at last week’s signing ceremony.

“We were trying to light a fire under the ministry about that slide,” Atleo said.

Visiting the slide site near Big Bar on Tuesday, Wilkinson expressed greater concern, calling the situation a top priority for DFO and “a very serious challenge” while warning that there are no simple solutions.

While roughly 10 percent of stranded salmon have been able to swim through the slide area, high water levels were hindering efforts to monitor the fish.

Victor Isaac, a Namgis First Nation councillor, served as team negotiator for Island/marine approach nations. He agrees wild salmon stocks are in a terrible state and sees the agreement as a first step in rebuilding the stocks. Decisions will be made jointly, and the federal government can be held accountable.

There has always been conflict with commercial and recreational fishing interests over entitlement to the stocks, Isaac said. When it came to catch quotas, First Nations got the short end of the stick every time. He has watched the Namgis fishing fleet in Alert Bay dwindle through the years from 100 boats to just two or three boats.

“I think it’s better to work together,” Isaac said, citing the rock slide as an example of a change in approach.

“They’re working with us now,” he added. 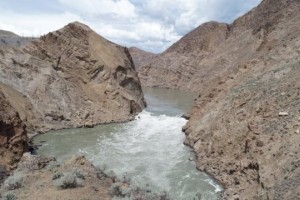 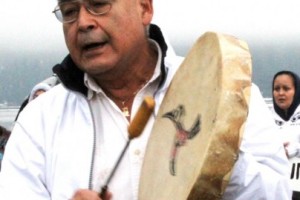