Dozens Came to Maht Mahs on Saturday during an event for children lost while attending the Alberni Indian Residential School. (Deborah Potter photos)

The ground was alive at the Maht Mahs Saturday morning, as dozens of residential school survivors shared their stories. Many of the survivors attending the ceremony had been to the Alberni Indian Residential School (A.I.R.S), opening up about their history and letting go of their traumas.

Survivors were lifted up by other survivors, as well as children, grandchildren, and extended family alike.

“Today we are proud to come back, to take back what we have lost,” a Gitxan elder spoke to the crowd.

The event was organized by the Tseshaht First Nation. On Saturday afternoon, the elected council, traditional Ha’wiih, and any other Tseshaht volunteers stood with them. A statement made by Chief Councillor Cynthia Dick says that the Canadian government disgraced their traditional territory by placing the institution at the site, and now Tseshaht is left to deal with the consequences.

In 1973, the Tseshaht First Nation forced the closure of AIRS. Decades later, spirits and energy can still be felt on the land were the facility once stood, most especially in the Maht Mahs gymnasium, and some NTC offices that were once old classrooms.

Tseshaht extended an invitation for the healing event to the United Church of Canada, which was declined.

While many steps towards reconciliation were taken during the ceremony, there is still a long ways to go. Dick publically called upon the Canadian government to provide nations with more information on the Truth and Reconciliation Commission report, which had over five generations of uncertainties for children who lost their lives in residential schools. The First Nation is hoping for clarity and closure to understand how children died under the church and government care.

The two-day event came just before Orange Shirt Day, which raises awareness for those who went to residential school, and those who couldn’t make it home. Orange Shirt Day happens yearly at the end of September, which was historically known as the time of the year Indigenous children were taken from their families and homes to go to residential schools.

“We are ready to move forward in a good way,” was a statement made by many of the survivors.

“It is because of each and every one of you that we are here,” said Dick, ending her media statement by giving thanks to the thousands of survivors who had carried their dark secrets and traumas. 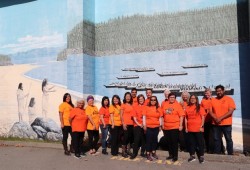