The push to increase the amount of Canada’s ocean that is protected from exploration and mining is being done without First Nations consent, according to Tseshaht Councillor Hugh Braker.

Braker delivered his comments on a proposed marine protected area west of Vancouver Island during a recent Council of Ha’wiih Forum on Fisheries. Comprising a vast territory more than twice the size of the island, the 139,700-square-kilometre area was designated as an offshore area of interest by Fisheries and Oceans Canada in 2017.

“I don’t want somebody telling me they’re going to decide how Tseshaht is going to manage its territory,” said Braker during the forum on Oct. 7 in Port Alberni. “I have attended the meetings on behalf of Tseshaht, and our position has been consistent: We claim the territory extending out into the ocean. The people have a story about a great harpooner who harpooned a whale, and he was taken out for four days and four nights. The whale dragged his canoe out into the ocean for four days and four nights before it finally died and he was able to start bringing it back to the people.”

The area of interest could soon become a marine protected area, which would legally prohibit certain industrial activities. Besides Explorer, it contains at least another 45 underwater mountains formed by shifting tectonic plates.

This designation puts the Liberals on pace to honour the commitment of a 10-per-cent increase to Canada’s marine protected areas by 2020. But the Tseshaht have been left out of the conservation initiative, said Braker.

“I objected in the meetings we had, because there is no recognition of our rights and title,” he said. “Once again somebody, the federal government, wants to make decisions about our territory for us.”

“The Tseshaht have a real problem with Parks Canada. They administer the Pacific Rim National Park Reserve, and they have claimed a huge part of our territory, the Broken Islands, as a park reserve, and now they’re claiming a huge offshore area as a marine protected area,” stressed Braker. “I can’t even get Parks Canada and DFO to sit down with Tseshaht to talk about how we’re going to harvest seafood in the Broken Group. They won’t even come to the table and sit with us, and if that’s an example of what the future is for the offshore, then we’re just making bigger problems.”

The DFO launched a two-week expedition through the offshore area in July, when a team of researchers ventured 150 nautical miles west of Vancouver Island to examine the Explorer Seamount, which is considered to be the largest underwater volcano in Canadian waters. The federal department included a Nuu-chah-nulth presence on this trip by bringing Tseshaht member Joshua Watts and Aline Carrier, Uu-a-thluk’s capacity building coordinator.

During a presentation at the fisheries forum Carrier noted that the sea mount’s unique ecosystem was connected to Vancouver Island’s forests.

“A tree on the coastal forest is related to a tree in the ocean,” she said. “The fish are feeding on plankton, and during the migration pattern they are going back to the coast. Then there are a lot of predators, the carcass of the fish is composted in the forest and giving food to the trees. So this way, everything is connected.”

“Seeing the life that’s around the sea mounts made me think a lot about the origin stories along the coast of a village of the salmon people and the oral histories around how the salmon chiefs lived in a place of abundance,” he said. “In our oral histories our people would go out to visit them to request that the salmon would come back.” 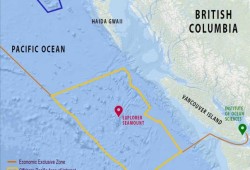 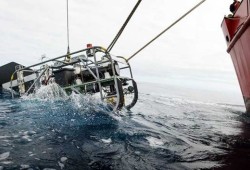 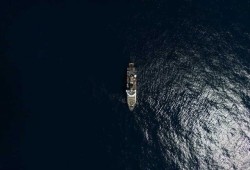