A report confirming the presence of piscine orthoreovirus (PRV) at most Clayoquot Sound fish farms has been dismissed by the industry as “misinformation and fear mongering.”

Analysis by the Atlantic Veterinary College detected the virus PRV-1a at 14 of the 15 Atlantic salmon farms sampled by Clayoquot Action between last May and December 2019.

In its report, Going Viral, the Tofino-based conservation society uses the results as compelling evidence that dwindling stocks of wild Pacific salmon are threatened by open net-pen fish farming in waters off the Island’s west coast.

“B.C. is in the midst of a wild salmon emergency,” said Bonny Glambeck, project co-ordinator with Clayoquot Action. “If the Liberals are not even going to come up with a plan for five more years, then they better stop the transfer of PRV-infected fish into B.C. salmon farms immediately or they’re not going to have to worry about wild salmon at all — they’ll be extinct.”

“Even in pristine rivers, very few salmon are returning of any species,” Glambeck said. “Having farms on their migratory route represents an unacceptable risk.”

In recent years, with a surge of PRV-related diseases reported in Pacific salmon farmed in Norway, Chile, Japan and Canada, research has concluded the virus can be a pathway for various diseases, depending on species.

Glambeck said they are particularly concerned about the risk of PRV-1a replicating at Creative Salmon sites and spreading.

“Because they are growing chinook, they are adapting the virus to Pacific salmon species,” she said. “It’s documented that this is what happens with fish farms.”

The industry was quick to dismiss the report, insisting that PRV-1a is naturally present in Pacific waters and not introduced through Atlantic salmon. The aquaculture sector has long maintained that the viral strain is endemic to B.C. waters, a benign strain that does not cause the heart and skeletal muscle inflammation found in Atlantic salmon.

“There’s a lot of misinformation and fear mongering here,” said Shawn Hall, a spokesman for B.C. Salmon Farmers Association. The virus could not have come from Atlantic salmon, he said. “We raise our salmon from local brood stock transferred from local hatcheries.”

Hall said the harmful viral strain is PRV-B, a Norwegian variety, not the strain Clayoquot Action found. Concern that the virus may potentially mutate into more virulent forms is speculation, he said. He also cited DFO testing of archived samples indicating PRV-1a has been present in Pacific salmon since 1987 and possibly a decade before. Others have pointed out that same period coincides with the arrival of fish farms along the coast.

Neither Clayoquot Action nor Tla-o-qui-aht accepts the industry’s arguments.

“They had the opportunity to present the scientific evidence that it’s benign in salmon in three court cases and were unable to convince the judges that it is harmless to salmon,” she said.

In the most recent court ruling, the judge ruled that DFO needs to embrace the precautionary principle and test Atlantic salmon smolts before they are transferred to open net pens. Former fisheries minister Jonathan Wilkinson announced rigorous testing would commence last spring.

“Now they’re doing the exact opposite,” Glambeck said. “They’re not testing and they’re not stopping the transfer of smolts to fish farms … I would really question the industry position on this. I think they’re really trying to cover something up.”

Tla-o-qui-aht Councillor Terry Dorward accused the industry, not its critics, of spreading disinformation. He said Tla-o-qui-aht council feels strongly that the industry must address disease concerns by moving to closed containment fish farming. The nation has had grave concerns about open net-pen fish farming for decades and first moved to block new operations from its waters in 1997.

Fed up, a citizens group from Tla-o-qui-aht took matters into their own hands last spring, boarding two fish farms and documenting conditions.

“We felt we weren’t getting the full picture,” Dorward said. “What we found was fish with a great deal of deformities and wild salmon going freely in and out of the pens.”

Since then there has been no substantive dialogue on the situation, he added. Nonetheless, Dorward is confident that a coastwide transition to closed containment, as promised by the Liberal government during the fall election, is imminent.

“I think Creative Salmon understands that the federal government is moving to closed containment in five years,” he said. “Instead of looking at transition, ways to work with First Nations, they’re sticking with the status quo, business as usual. We should expect more direct action from this.”

Minister of Fisheries Bernadette Jordan, who succeeded Wilkinson after the fall 2019 election, noted recently that she is mandated to come up with a transition plan by 2025, not to see it implemented by then as others contend.

“I know that position,” Dorward said. “It’s more delay tactics. I think the federal government knows the end is near for open net-pen fish farming.”

Tla-o-qui-aht leadership acknowledges the importance of fish farming to the local economy in providing a source of employment, he said. They hope to engage further with Creative Salmon on closed containment while exploring economic alternatives such as kelp farming.

Since wild salmon are clearly in jeopardy, they feel compelled to do whatever they can.

“There could be a lot of factors — temperature of the water, climate change,” Dorward said. “These are things that are quite difficult to get a handle on regionally. One of the things we can do is we will quit allowing fish farms to pollute our waters.” 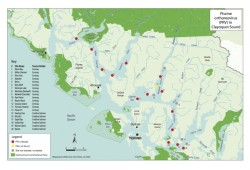