Tseshaht block access to Somass while DFO sits on agreement

Tension building over a summer of stalled agreements with Fisheries and Oceans Canada snapped Wednesday when Tseshaht members blocked boat access to the Somass River.

By 5 p.m. on Sept. 2 a pickup truck sat in the way of the ramp into the Somass from the Clutesi Haven Marina, as a large gathering of Tseshaht members gathered in support.

The DFO’s refusal to sign an agreement with the Tseshaht has caused the First Nation to miss the first two weeks of chinook salmon fishing on the Somass River, thereby forcing more families to rely on welfare, according to letters sent to Ottawa earlier in the day.

This message came from Hugh Braker, the Tseshaht’s lead fisheries negotiator, outlining an increasingly critical situation for many of the First Nation’s members who count on the chinook run for a livelihood. In his letter to Fisheries Minister Bernadette Jordan, Braker noted that regional DFO staff are now sitting on an agreement signed by the Tseshaht, a document drafted by the federal department’s own staff. This plan for the Somass River has a combined allocation of over 18,000 chinook for the Tseshaht and Hupacasath – but so far only the Tseshaht’s neighbours have an agreed upon economic opportunity arrangement with DFO.

“Your staff’s refusal to sign the agreement has already cost Tseshaht families hundreds of thousands of dollars as they have been denied access to their jobs for the first two weeks of the chinook fishery season,” wrote Braker. “Your staff’s actions are threatening to put hundreds of Tseshaht on welfare this year.”

In a letter also sent today to Prime Minister Justin Trudeau, Braker noted that for the last 28 years the Tseshaht have fished under economic opportunity agreements with DFO, although the First Nation has not always agreed with the terms. But as chinook continue to pass down the Alberni Inlet into the Somass, fishing beyond moderate food, social and ceremonial purposes runs the risk of confrontation with federal boats while the current economic opportunity deal remains unsigned by Fisheries and Oceans Canada.

“In the last negotiation session with DFO staff, the staff suggested that Tseshaht sign an agreement effective immediately and until March 2022. We were told we could negotiate the terms AFTER we signed the agreement,” wrote Braker. “I ask you minister, what other group, besides Aboriginal people, in Canada is told to sign an agreement first and then negotiate in respect to that agreement after it is signed? I can assist you minister. None.”

Besides over 18,000 chinook allocated to the Hupacasath and Tseshaht, the unsigned agreement sets commercial seine and gillnet allocations at approximately 18,000, with another 28,000 or so allotted to the sports fishery, according to Tseshaht negotiators.

Fisheries and Oceans Canada would not respond to Ha-Shilth-Sa’s requests for more information on these allocations, nor answer why the pending agreement with Tseshaht remains unsigned.

But Braker noted that over the last two days of August the area’s commercial fisheries had already caught over 18,000 chinook from the Alberni Inlet, and others in the First Nation believe the seine and gillnet fleets have exceeded their allocation by as much as 10,000 fish.

This recent breakdown in negotiations follows the lack of an economic opportunity agreement between both parties for the sockeye fishery in early July. This would have enabled the Tseshaht to sell their catch to commercial buyers, but by following the First Nation’s constitutionally protected Aboriginal right to fish from their territorial waters, the Tseshaht proceeded to harvest sockeye this summer, selling their catches on the side of the road.

“While the Fisheries Act contains provisions for penalizing people who breach government regulations, your staff have chosen to ignore those provisions and penalize Tseshaht by denying them an income,” wrote Braker in his last letter to the fisheries minister.

The most recent chinook bulletin issued by DFO on Aug. 27 estimated that 23,844 of the salmon had already been caught from a run forecasted to be between 68,000 and 115,000 in size. The Somass First Nations of Tseshaht and Hupacasath has caught 2,609 chinook, while the recreational fishery - which opened July 15 with a limit of two fish a day per person - took in 8,293. The commercial Area D gillnet fleet caught 5,292 chinook, and Area B seine vessels harvested 6,000 of the fish. Maa-nulth First Nations in Barkley Sound and the Alberni Inlet had caught 1,650 of the salmon, according to the numbers collected by DFO and its roundtable partners. 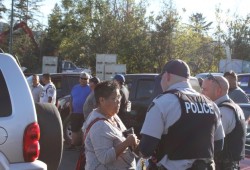 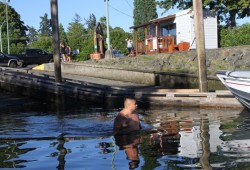 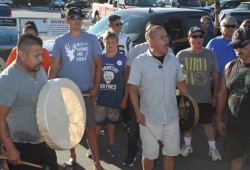