An all-out tripartite response to rescue Fraser River stocks after the Big Bar Slide should be a template for reversing steep declines of Pacific salmon coastwide.

That proposal was among a raft of reforms demanded by witnesses who appeared Wednesday, Dec. 9 before the Parliamentary standing committee on fisheries and oceans. The two-hour testimony gave a handful of First Nation representatives a chance to speak their minds on the collapse of wild salmon stocks, a disaster unfolding.

“There really has been a huge lack of connection with reality out here,” said Wickaninnish, Cliff Atleo of Ahousaht, testifying before MPs via Zoom.

Witnesses had only five minutes each to convey the seriousness of steep declines in wild salmon on the West Coast. A DFO policy that used fishing pressure on U.S. chinook stocks as leverage to negotiate a salmon treaty was an initial blow, Atleo said.

“Our stocks have never recovered from that,” he said. “The existence of fish farms along the west coast of Vancouver Island has severely restricted the recovery of all species … DFO has the authority to manage with devastating results.”

Poor logging practices and irresponsible land use have also contributed to the decline, he added.

“Poor action in addressing climate change by all governments is not helping, either,” Atleo said.

Only after First Nations raised alarm in the aftermath of the Big Bar disaster last year was there an appropriate response from governments, he recalled.

The committee session was held the same morning as the Big Bar Slide response team announced via teleconference that work will begin shortly on a $176-million permanent fishway, a virtual life ring for struggling Fraser stocks.

A contract has been awarded to Peter Kiewit Sons, the same company hired to clear the river channel of debris from a massive 2019 slide that threatened salmon migrating to Interior spawning grounds. Construction is to start during this winter’s low-water period with the goal of having the fishway operational by the start of 2022 migration.

After extensive channel remediation work last winter, an analysis concluded in July that a fishway is the only long-term solution that can provide reliable fish passage at Big Bar, said Gwil Roberts, director of the response team.

“The construction will begin immediately with mobilization and design work happening quickly,” Roberts said. “It’s a difficult place for trying to install anything in the river,” he added. “We need to ensure that the fishway is large enough to handle high volumes … but not so large it would cause additional issues in that canyon.”

“Kiewit and First Nation crews, along with provincial and federal staff, have made remarkable progress to support the 2020 migrating salmon,” said Chief Roy Fletcher of High Bar First Nation. “We are pleased that the federal government is now moving ahead with a permanent solution at Big Bar. Our hope is that once this pathway is completed, we will once again see salmon flow in our streams.”

Government officials repeatedly stressed the importance of the tripartite approach in responding to the challenge posed by the slide barrier.

Governments need to adopt the same collaborative approach to save wild Pacific salmon as a whole, the Parliamentary committee was told.

“Free, prior and informed consent must be an essential component,” said Chief Bob Chamberlin of First Nations Wild Salmon Alliance. “The crisis that is B.C.’s state of salmon simply cannot wait for implementation (of UNDRIP). This is the beginning of a downward spiral of a species, and this is no exaggeration.”

“Never before have I seen such an effort to engage the public,” Morten said. “Thousands have stepped up. Where is the three-government command centre for salmon where the work is done just for salmon?”

Chief Tyrone McNeil of Stolo Tribal Council said they consider the Fraser as the mother of all rivers: “It’s in our blood, it’s in our DNA. I would think that in the era of reconciliation, folks like you would be doing everything to ensure that sustenance is met.”

The federal government has completely dropped the ball when it comes to consultation, he said.

What solutions could witnesses offer?

“It would be to start recognizing the results of their poor management,” Atleo said.

“I think we need to connect all the dots,” Atleo said. “All the things mentioned are inter-related. In our view, management is not accountable and that should never be when it comes to management of a natural resource.”

“Right now, I believe this is a watershed moment,” said Courtenay-Alberni MP Gord Johns, a member of the Commons committee, as the meeting ended. “Without emergency action, this could be the minister who oversees the collapse of wild salmon.”

“Our culture, our way of life and well-being will all collapse, forcing us into Third World conditions in our homelands,” said Arthur Adolph of Xaxli'p First Nation. 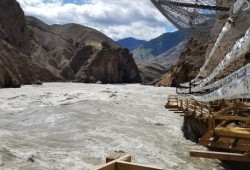