A permanent $176-million fishway is not ready for 2021 returns, part of the ongoing struggle to ‘recover the wildness’ at the disaster site. (DFO photos)

“We think it’s important of the community to do the ceremony in celebration of our culture, traditions and teachings to keep them alive, but also to give prayers to the ancestors to help guide these fish back to the ocean and back to us,” said Chief Leah Stump of Nazko First Nation after taking part in the April 27 ceremony.

Delicate, silvery slivers a few centimetres in length, the fry imprint their freshwater habitat as they drift downstream to the Fraser River, forming their essential nature, an uncanny ability to return years later to the same river to spawn.

Instinct aside, these fish will need all the help they can get to begin rebuilding a food source critical to the Dakehl and other Interior First Nations. Spring 2021 is shaping up to be another nail-biter for salmon passage at Big Bar.

“From my perspective, we’re still really dealing with the Big Bar Slide and response,” said Gord Sterritt, executive director of the Upper Fraser Fisheries Conservation Alliance. “We know the fish are more impacted in the Upper Fraser due to high water early in the season. These enhancement efforts are trying to address it in the short term.”

The Blackwater release is part of a larger program involving 101,000 fry and a dozen Upper Fraser watersheds. They are important for long-term rebuilding of Fraser chinook, already threatened prior to the 2019 slide, yet they are also a stop-gap to gain some measure of mitigation as work continues on a $176-million permanent fishway at Big Bar, Sterritt explained. Construction began last winter.

“We’re still proceeding with construction of permanent passage, but we’ll not have that ready for this year’s migration, which starts, basically, now,” said Michael Crowe, manager of biological programs with the slide response team.

As an interim measure, contractor Kiewit & Sons constructed another “nature-like” fishway at the barrier.

“We have hope and confidence it will operate at a higher rate of flow,” Crowe said.

The slide response team, including First Nations and DFO, had to continually revise their plans based on emerging challenges since the slide. The Fraser’s mighty spring freshet is the wild card. Last year, there were 100- and 200-year floods in the Chilco and Blackwater watersheds, Sterritt noted. Then there was the Fraser freshet, intense and sustained, another hurdle for chinook and slide response measures.

This year, there remains a lot of snow in some Fraser drainages. The average snowpack provincewide as of May 1 was only slightly above normal. Higher than average snowpack persists in northern B.C., including the Upper Fraser, according to B.C. River Forecast Centre.

For migrating chinook and early Stuart Sockeye reaching the slide in coming weeks, much depends on the weather. Chinook stocks most at risk are those that arrive at Big Bar from mid-May to July. Spring five-year-olds arrive at peak freshet, making them most vulnerable.

“With the early-timed stocks, we’re trying to protect their genetic diversity and protect them, as a population potentially becoming extinct or extirpated because of the challenges they face,” Sterritt said.

Chinook fry released this spring were reared from brood stock collected last year below the slide. Gitksan, Sta’t’imc, Secwpemc and Sylx crews led fish wheel operations and transported fish collected at the slide site by truck to the a holding facility at French Bar Creek. This was critical to capture of salmon for radio tagging, emergency enhancement and upstream release. By mid-August, Indigenous crews moved more than 1,500 salmon over the slide, capturing approximately 90 per cent of early-timed chinook and Early Stuart sockeye needed for the enhancement plan.

Eggs and milt were then collected from these adults, as well as from those from the natal streams. The eggs and milt were then transferred to Quesnel River Research Centre for fertilization and incubation to eyed stage. In early fall 2020, some of the eyed eggs were relocated to Spius Creek and Chehalis River hatcheries.

Sterritt and Crowe said every effort was made to genetically match brood stock with streams of origin hundreds of kilometres upriver. If there was low confidence in a match, the fish were released. If they couldn’t form a matching pair, the salmon were released.

“Obviously, there was some uncertainty, and it may not be a distinct population but part of the same genetic unit,” Sterritt said.

“I’d say, we can’t calculate very accurately, but it’s not a massive difference,” Crowe said. “Enhancement is still an opportunity to recover the wildness.”

Last spring, the slide response team was testing another stop-gap measure, a pneumatic fish pump trade named Whooshh. The system has been sidelined this season.

“It did work, but there were challenges,” Crowe said. “It worked as a high-water backup, but site constraints made it very difficult to use effectively.”

In its place, a holding area used to corral fish for Whooshh passage was modified for beach seining and truck transport of fish around the slide.

“How confident am I? I’m confident the fish can get by the barrier, but it all depends on the environmental conditions … If we can get back to a normal year or things similar to normal, we should see greater passage.”

If not, they will continue to trap and transport.

Until the permanent fishway passes its first test next spring, every emergency measure plays a part. Until then the barrier remains, not only to fish but to traditional ways of life.

Chief Stump described the impact of Big Bar as “devastating.” A teacher by profession, she is concerned about passing down knowledge to children. Her husband is a councillor of ?Esdilagh First Nation, smallest of six Tsilhoqo’tin nations.

“Their people really rely on salmon. A lot of their summer is spent harvesting and preparing salmon for winter and providing our family with fish,” Stump said.

The fry release at least gives them hope “that our salmon can survive.”

Other Stories in
Health, Fisheries 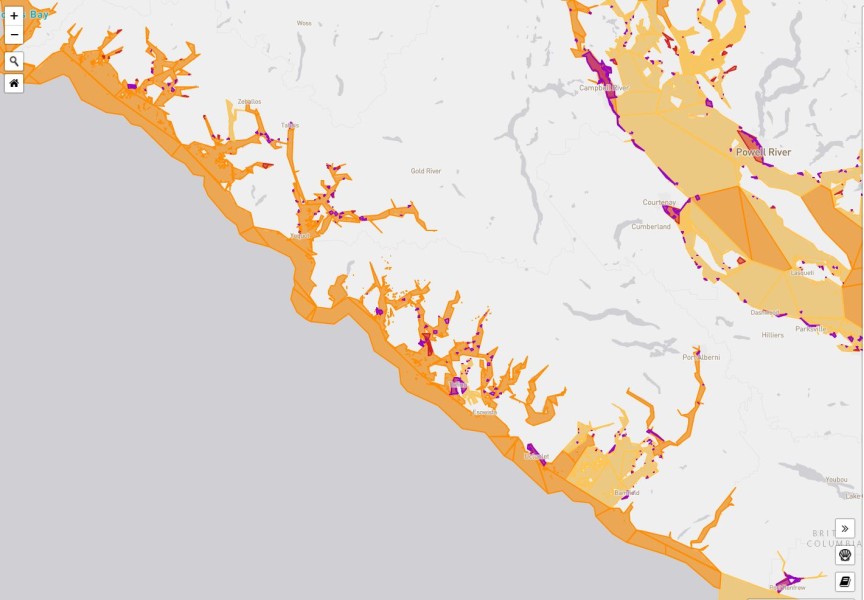 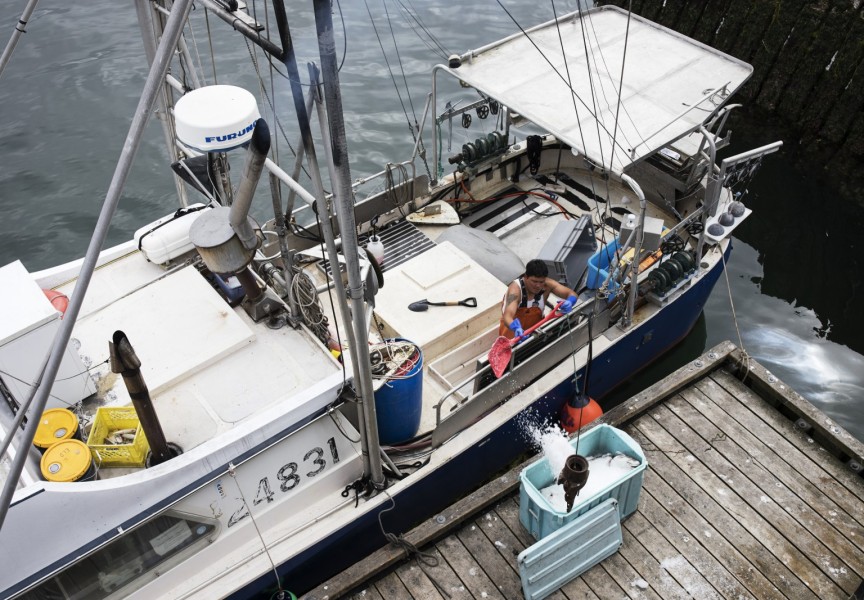 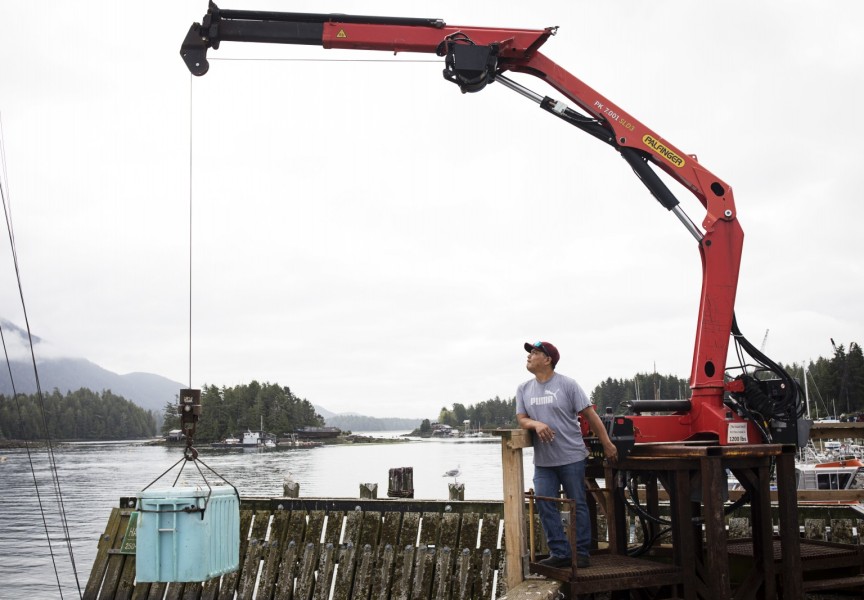 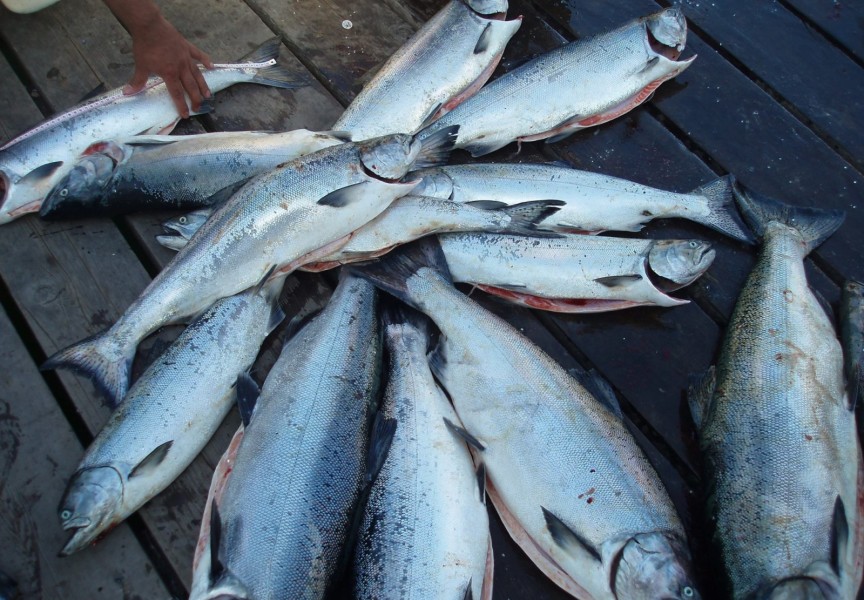